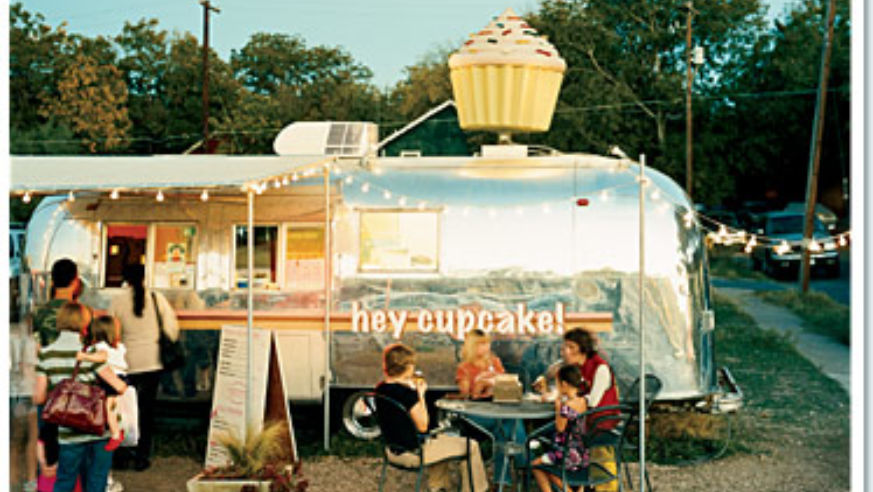 The quirky Texas capital sways to the strum of its own guitar.

1. Breakfast is a religion
Eight years ago, Taco Xpress owner Maria Corbalan invited the Harmonizers, a local gospel band, to entertain Sunday brunch patrons on the back patio. It was the first gathering of her hippie church, as she likes to call it. Now, an eclectic crowd of bikers, college students, and parents with flush-faced kids shows up each week to nosh on Corbalan's divine chicken tacos and listen to gospel. It's for a good cause, too: Once a month, in lieu of tips, the band collects donations for homeless and women's shelters. 2529 S. Lamar Blvd., 512/444-0261, tacoxpress.com, tacos $2.25.

2. You can always make a splash
When the summer heat hits, Austinites cool off in the dozens of watering holes around town. Among the most popular is Barton Springs, a three-acre pool set amid pecan trees in Zilker Park, where the water is 68 degrees year-round. 2101 Barton Springs Rd., 512/476-9044, www.ci.austin.tx.us/parks/bartonsprings.htm, $3.

3. The bands play on
Austin touts itself as the Live Music Capital of the World, with good reason—it has nearly 200 concert venues. Only in town for a night? Look no further than The Continental Club, a 1950s music hall that hosts every sort of band from rockabilly to punk (1315 S. Congress Ave., 512/441-2444, continentalclub.com, cover from $5). Not surprisingly, the city also has a beloved radio station, KGSR (107.1 FM, kgsr.com), which plays area artists like Patty Griffin and James McMurtry. When the DJ says, "Sounds like Austin," it's the tip-off that you just heard a local.

4. People don't honk their horns
Austin is consistently rated one of America's most livable cities because of its fast-growing economy, abundance of green space—and perhaps the fact that road rage is a rarity. Once, when a driver fell asleep at a red light on a busy street, a line of cars patiently waited for him to finish his nap.

5. Everybody's flexible
What accounts for Austin's deep calm? As all those I'D RATHER BE IN SAVASANA bumper stickers suggest, this is a yoga town. You'll find a place to unroll your mat on nearly every corner, but the granddaddy of studios is Yoga Yoga, which was started in 1998 by husband-and-wife team Mehtab and Guru Karam Benton, who used to teach out of their spare bedroom. They now have five locations around Austin and offer over 400 classes, including one for toddlers. 512/490-1200, yogayoga.com, single class $17.

6. Weirdness is a way of life
Librarian Red Wassenich coined the phrase Keep Austin Weird on a radio show in 2000. Ever since, it's been the rallying cry of residents bent on preserving the city's funky flavor. In addition to a book, Keep Austin Weird, Wassenich has a website that pays tribute to strange places around town, such as the Cathedral of Junk, a 60-ton sculpture of car parts, furniture, and bric-a-brac that a South Austin man has been amassing in his yard for 20 years (4422 Lareina Dr., 512/299-7413). "There's so much conservatism in the world," says Wassenich. "It's nice that weirdness is rewarded here." keepaustinweird.com.

7. The battle of the cupcakes
Some claim that the buttercream classics at Polkadots Cupcake Factory are tops (2826 Rio Grande St., 512/476-3687, polkadotscupcakefactory.com, from $2.50). Others insist the red velvets with cream-cheese icing at Hey Cupcake reign supreme (1600 block of S. Congress Ave., 512/476-2253, heycupcake.com, from $2). The great thing about a cupcake war? Everybody wins!

8. Rock stars sleep here
The best place to park your bags is the chic Hotel San José, a 1930s motor court transformed by owner Liz Lambert into a boutique hotel. A favorite hangout of visiting musicians, the San José has 40 rooms with reclaimed-pine platform beds and Frette linens, as well as a courtyard blossoming with jasmine. 1316 S. Congress Ave., 512/444-7322, sanjosehotel.com, from $95.

9. Great-great-grandpa's barbecue
The secret to the world-famous 'cue at The Salt Lick restaurant is the vinegar-based sauce recipe that owner Thurman Roberts's family has passed down for generations. The pork ribs, sausage, and brisket are also smoked for 20 hours before they land on a giant platter at your picnic table. 18300 FM 1826, Driftwood, 512/858-4959, saltlickbbq.com, barbecue plate $12.

10. You can read all about it
Any newcomer eager to get oriented should grab a copy of The Austin Chronicle, the free alternative weekly known for its liberal bent and in-depth reports on local politics. There's no better source for spotting what's hot, from the best 24-hour café to the hippest gay bar. austinchronicle.com.

11. The weekend starts on Thursday
A street party breaks out on South Congress Avenue on the First Thursday of each month, with restaurants, galleries, and shops staying open late and vendors selling tooled Western belts and onesies printed with armadillos. This being Austin, the festivities wouldn't be complete without music—there's always a band playing under the oaks at Güero's Taco Bar. firstthursday.info.

12. No need to leave empty-handed
The antiques, vintage duds, and curiosities at Uncommon Objects attract all manner of shoppers: "We have well-heeled congressmen browsing next to tattooed hipsters," says owner Steve Wiman. Among the attention getters are silver longhorn tie clips and 1920s cowboy boots adorned with the Texas star. 1512 S. Congress Ave., 512/442-4000, uncommonobjects.com.

13. Dogs rule
Nobody has it as good as a pooch in Austin: With all of its grassy preserves, this city is an off-leash paradise. Dogs have the run of 13-acre Red Bud Isle between Lake Austin and Lady Bird Lake, but there's plenty for their owners to do, too, including fishing, swimming, and walking the wooded trails. redbudisle.org.

14. Cowboys know how to dance
The Broken Spoke has been serving chicken-fried steaks and showcasing country acts since 1964. While owner James White holds court in a pearl-snap shirt, his daughter Terri teaches country dancing. "Ladies, let him lead!" she hollers. "Now fellas, dance her, dance her." After you learn to two-step, stay for singer Dale Watson's set to show off your moves. 3201 S. Lamar Blvd., 512/442-6189, brokenspokeaustintx.com, cover from $5, lessons $8.

15. The big house awaits
Built in the late 1800s, the 48-room Mansion at Judges' Hill, with its wraparound porch, four-poster beds, and granite-topped desks, is one of the city's most elegant hotels. But snooty it isn't. The snickerdoodles at the front desk are there to be devoured. 1900 Rio Grande St., 800/311-1619, mansionatjudgeshill.com, from $169.

16. Underdogs prevail
When Borders tried to open a mega store across the street from BookPeople (603 N. Lamar Blvd., 512/472-5050, bookpeople.com) and Waterloo Records & Video (600A N. Lamar Blvd., 512/474-2500, waterloorecords.com), the community raised a ruckus. Borders retreated with its tail between its legs, and both indie shops are going strong, championing the works of local talents, such as satirist Sarah Bird and fiddler-singer Carrie Rodriguez.

17. It's blooming wild
At the Lady Bird Johnson Wildflower Center, cofounded by the former first lady to preserve North America's native flora, some 650 indigenous Texas species are spread across more than 20 gardens and meadows. Visit in spring when the bluebonnets are at their peak. 4801 La Crosse Ave., 512/232-0100, wildflower.org, $7.

18. The Austin diet
Barbecue and tacos may be the city's staples, but for a big meal out, there's Wink Restaurant & Wine Bar. Stewart Scruggs and Mark Paul, the chefs and co-owners, gather their ingredients from area farms and tinker with the menu daily. You might find antelope with white Siberian kale, or Gulf of Mexico triggerfish and littleneck clams over homemade pasta. 1014 N. Lamar Blvd., 512/482-8868, winkrestaurant.com, entrées from $18.

19. Art without pretension
Walking into Yard Dog, one of Texas's premier folk and outsider art galleries, is like entering a Eudora Welty story: The room is crowded with curious paintings, furniture, and constructions that celebrate Southern life. Owner Randy Franklin's collection spans from well-known figures like Mose Tolliver to his own discoveries, such as Ms. Wild, a transgendered painter he met at a homeless artists' show. 1510 S. Congress Ave., 512/912-1613, yarddog.com.

20. Tough Texans
The TXRD Lonestar Rollergirls leave it all on the track: After every match in the women's five-team Roller Derby league, the combatants are bloodied, bruised—and pumped up. "The hits you see are real," says Audrey Butera-Young, who skates under the name Ali Mony for the Rhinestone Cowgirls. "I've broken a rib, dislocated my kneecap, and ripped a muscle. But I've always been back on the track as soon as possible!" The Roller Derby season runs from February to October at the Austin Convention Center. 500 E. Cesar Chavez St., txrd.com, $15.

21. There's a party going on right now
Austin is serious about its festivals. Thousands of indie rock, country, and bluegrass fans converge on the city each year for South by Southwest (sxsw.com, Mar. 19–21) and Austin City Limits (aclfestival.com, Oct. 2–4). For the literary crowd, Austin hosts the annual Texas Book Festival, which draws more than 200 international authors (texasbookfestival.org, Oct. 31–Nov. 1).

22. You can run a bar tab at the theater
Once you watch a movie at an Alamo Drafthouse Cinema with a Texas-brewed Shiner Bock in one hand and a basket of fried pickles in the other, you'll never go back to the multiplex again. Drafthouse has four outlets in town, each of which hosts special events like Kung Fu Sundays.drafthouse.com, movie from $6.50.

23. No gym membership required
Runners eschew the treadmill for the Greenbelt, a park along the dry bed of Barton Creek that has eight miles of trails, plus a few cliff faces for rock climbers. Another favorite workout spot is the Lady Bird Lake Hike and Bike Trail, 10 miles of paths on the waterfront. www.ci.austin.tx.us/parks/trails.htm.

24. Tequila sunsets
The perfect place to end an Austin stay is the terrace bar of the InterContinental Stephen F. Austin hotel, overlooking downtown. Order a Stephen F. Top Shelf, the house margarita, tip your cap to the mounted longhorn on the wall, then watch the Texas Capitol turn pink as the last rays of the sun hit it. 701 Congress Ave., 888/424-6835, austin.intercontinental.com, margaritas from $12.

25. The Livestrong lifestyle
As is fitting for Lance Armstrong's hometown, Austin has a dazzling network of well-maintained bike paths. Rent your wheels at his new store, Mellow Johnny's—a play on the Tour de France's maillot jaune, or "yellow jersey"—and grab a peach-tea smoothie to go from the shop's Juan Pelota Café. 400 Nueces St., 512/473-0222, mellowjohnnys.com, two-hour rental $15.