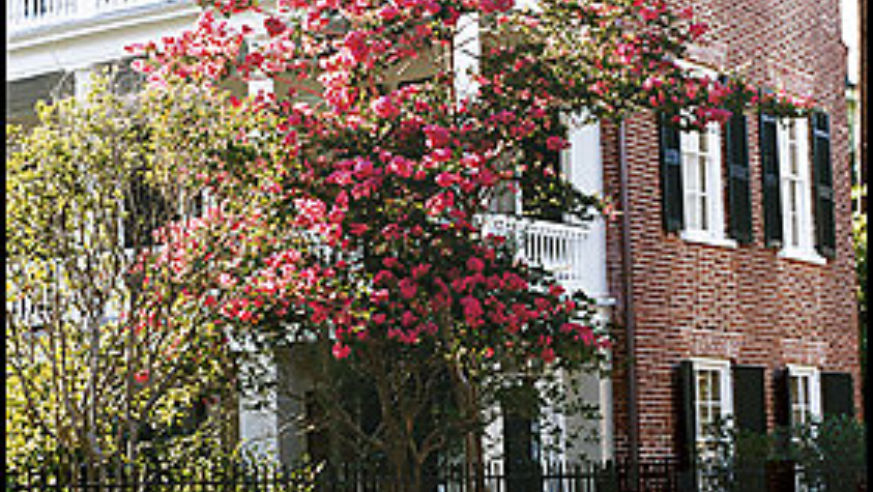 Gracious! America's most genteel city is behaving like a frisky debutante.

1. Modell city
The first Charles Towne was established in 1670 across the river from the city's current location, which was designed according to an elaborate, somewhat utopian plan referred to as the Grand Modell. It called for 70-foot-wide main streets and a town center at the intersection of Meeting and Broad. The Original Charleston Walks leads daily tours through the historic area. 45 Broad St., 800/729-3420, charlestonwalks.com, from $18.50.

3. Not your grandma's fried chicken
In a tiny yellow 18th-century house on Pinckney Street, the two-room Cru Café is the perfect retreat from the bustle of downtown. Diners can sit at small banquettes or at a bar-cum-chef's table facing the open kitchen where chef John Zucker cooks his upscale comfort food. The poblano-and-mozzarella fried chicken with a honey-chipotle salsa is a definite must. 18 Pinckney St., 843/534-2434, crucafe.com, entrées from $14.

4. Southern hospitality
Charleston has plenty of grand hotels, but the rooms at the Market Pavilion Hotel come with a gentler price tag; some even have views of the Old City Market, where women have been weaving sweetgrass baskets since 1841 (225 E. Bay St., 877/440-2250, marketpavilion.com, from $229). The vistas from the Roof Top Bar & Restaurant at the Vendue Inn are also spectacular--and the beers are $3. The interior queen rooms, a mix of French provincial and American colonial decor, are a good deal at $139 per night (19 Vendue Range, 843/577-7970, vendueinn.com).

5. A spot of tea
Bigelow Tea got its start in 1945 because Ruth Bigelow was looking for a little more zest in her morning cup. At the company's Charleston Tea Plantation, the only commercial tea farm in the continental U.S., visitors can follow the production process from raw leaf to finished tea bag. 6617 Maybank Hwy., 843/559-0383, charlestonteaplantation.com, free.

6. Where there's Smoak...
Stephen Smoak, known as Smoak to regulars, is one of the city's best bartenders. At Red Drum Gastropub, he mixes special-recipe ginger mojitos and espresso martinis that make for a nice pairing with chef Ben Berryhill's Southwest-influenced cuisine: crab tostaditas with red voodoo sauce, tuna tacos served with cowboy beans, and clams in a chili broth. 803 Coleman Blvd., 843/849-0313, reddrumpub.com, entrées from $12.

7. Top hats
When it comes to feathered fedoras and cloches, Leigh Magar is your milliner (as well as Michael Stipe's and Christina Aguilera's). "I'm currently obsessed with incorporating Greek gilded-wreath designs into my hats," says the South Carolina native, who gets her inspiration from travel. Her shop, Magar Hatworks, is inside a former beauty parlor. 557½ King St., 843/577-7740, magarhatworks.com.

8. Long live the King
This spring, one of America's oldest cities refurbished one of its oldest districts, Upper King, adding bluestone walkways and a string of new boutiques. A local favorite is B'zar, a shop owned by Brooklyn transplants Gustavo and Andrea Serrano that stocks affordable clothing and accessories, including totes named after the couple's dog, Roxy. 541 King St., 843/579-2889, shopbzar.com.

9. Hominy sweet Hominy
The place for sophisticated-but-homey Southern fare, such as okra-and-shrimp beignets with salsa and cilantro-lime sour cream, is Hominy Grill. Chef Robert Stehling uses only regional ingredients, right down to the grits, which come from a mill near his North Carolina hometown. 207 Rutledge Ave., 843/937-0930, hominygrill.com, entrées from $10.

10. Preserving the past
The Old Slave Mart Museum has the last intact slave-auction gallery in South Carolina. The museum has been closed to the public for the last 20 years, but it has plans to reopen this fall. It will acknowledge the city's disturbing history: Roughly 40 percent of all slaves who were shipped to this country between 1700 and 1775 disembarked in Charleston Harbor. 6 Chalmers St., 843/958-6467, oldslavemart.com, $7.

12. And the food is good
Mustard- and olive-colored walls, rustic hutches, and dreamy landscapes by local photographer John Duckworth set the stage for the elegant fare served at FIG, short for Food Is Good. Popular dishes include a garlicky frisée salad garnished with lardons, and South Carolina lamb with a goat cheese and potato puree. 232 Meeting St., 843/805-5900, eatatfig.com, entrées from $20.

14. Better homes and gardens
Each fall, the heavy wooden doors and garden gates of the city's private historic houses swing open to the public. Throughout late September and October, around 180 residences participate in the Preservation Society of Charleston's Fall Tours of Homes & Gardens, some of which are evening walks (147 King St., 843/722-4630, preservationsociety.org, $45). Certain homes, such as the Edmondston-Alston House--where Robert E. Lee took refuge during the Civil War--offer tours all year long (21 E. Battery St., 843/722-7171, middletonplace.org, $10).

15. The telltale tavern
Sullivan's Island is a sleepy town (population 1,873) with wide, sandy beaches. It's also the site of Fort Moultrie, a significant battleground during the American Revolution and the Civil War (1214 Middle St., nps.gov/fosu, $3). Edgar Allan Poe was stationed as a soldier on the island from 1827 to 1828, and Poe's Tavern pays the author tribute--of a sort--with such dishes as Edgar's Drunken Chili and a Pit & Pendulum burger made with applewood-smoked bacon and sharp cheddar (2210 Middle St., 843/883-0083, poestavern.com, sandwiches from $8).

17. Here's the beef
Charleston's revered downtown burger shack, Your Place, recently relocated to Mount Pleasant. Die-hards may bemoan the new nautical-themed decor--life preservers and photos of lighthouses cover the walls--but the monstrous cheeseburgers topped with bacon and jalapeños are still drawing them across the bridge. 217 Lucas St., 843/388-8002, burger $6.50.

18. This little piggy went to market...
The stalls at the Charleston Farmers Market, held Saturdays from 8 A.M. to 2 P.M., aren't limited to fresh produce. Vendors sell everything from pulled pork sandwiches at the Omelette Station to sweetgrass scrubs at The Charleston Soap Chef. Marion Square, 843/724-7309, closed late December to early April.

19. On the sauce
Barbecue in Charleston is all about the right base, but Ciarán Duffy, the chef at Tristan, has added an unexpected ingredient to the mix: cocoa. His sauce comes in three flavors--chocolate, chocolate chili, and chocolate pomegranate. 55 S. Market St., 843/534-2155, tristandining.com, entrées from $17.

20. Just call them Social drinkers
There are more than 50 wines sold by the glass at Social Restaurant & Wine Bar, a new spot in East Bay with industrial track-lighting and bartenders who wear WINE STUD T-shirts. The Kiona, an inky cabernet with hints of chocolate, is excellent. 188 E. Bay St., 843/577-5665, socialwinebar.com, from $3.

21. Sugar and spice and everything nice
Ex-Manhattanite Kristin Kuhlke has made a name for herself on King Street with Cupcake, a bakery that sells over 30 varieties of cupcakes, including red velvet (433 King St., 843/853-8181, freshcupcakes.com). Before opening the bakery, Kuhlke worked for a cell phone company, fielding complaints. "When I moved back to Charleston, I just wanted to make people happy," she says. "And who doesn't love cupcakes?" Another good spot for a sugar fix is Three Smart Cookies, where iced cookies come in dozens of shapes, from polar bears to pink polka dot bikinis (334 E. Bay St., 843/937-9229, 3smartcookies.net).

23. Thursday night fever
The Hot Wheels Skating Center on James Island, a 10-minute drive from downtown Charleston, has a Rolling Back in Time night every Thursday. It's a bargain at $3, including skate rental. 1523 Folly Rd., 843/795-7982, hotwheelsskating.net.

24. From rice to riches
The plantations that made Charleston into a wealthy city were built along the banks of the Ashley River. The most iconic is Drayton Hall, the oldest preserved plantation house in the South. 3380 Ashley River Rd., 843/769-2600, draytonhall.org, $14.

25. Going to the chapel
The oldest church in town, St. Michael's Episcopal Church, has a 186-foot tiered steeple (71 Broad St., 843/723-0603). St. Philip's Episcopal Church, meanwhile, is known for its graveyard, the resting place of Edward Rutledge, a signer of the Declaration of Independence (142 Church St., 843/722-7734). Sunday mornings, look for the procession of boys in seersucker and girls in Mary Janes.