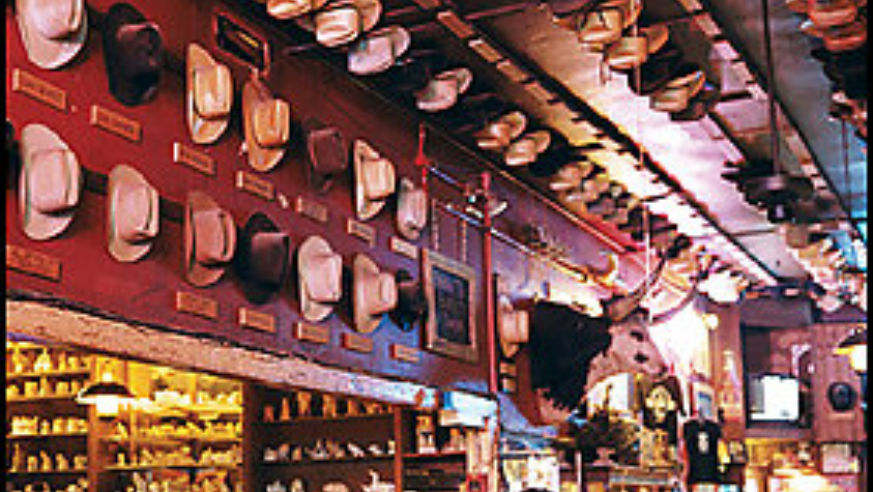 The city is mighty cosmopolitan for a "Cowtown." The cattle drives are just for show--but the avant-garde theater, floating museum, and white-water rapids are the genuine article.

1. Hungry, pardner?
Fort Worth has long defined itself as the opposite of its flashy neighbor, Dallas. Walk into Railhead Smokehouse BBQ, and you'll have no doubt where owner—and state rep—Charlie Geren stands on the matter: Everything reflects Cowtown's down-home roots, including the beer served in goblets and the platters of pork ribs and barbecued chicken. In case diners need reminding, staff T-shirts say "Life is too short to live in Dallas." 2900 Montgomery St., 817/738-9808, railheadonline.com, two-meat platter $10.

2. Blazing saddles
While the daily cattle drives (see no. 7) are just for show, rodeos at the Cowtown Coliseum are serious business. Contenders, some nationally ranked, face off in open rodeos held every weekend (121 E. Exchange Ave., 817/625-1025, cowtowncoliseum.com, $15). The action spills over into the bull-riding ring and dance floor at Billy Bob's Texas, where there are 32 drink stations and a mirrored saddle in place of a disco ball (2520 Rodeo Plaza, 817/624-7117, billybobstexas.com, cover up to $10).

3. The buck starts here
All U.S. paper currency comes from just two sources: Washington, D.C., and Fort Worth. The latter's Bureau of Engraving and Printing produces billions of notes annually, each with a tiny FW on the front. On 45-minute weekday tours, you can check out the production floor and learn about anti-counterfeiting features—like watermarks and color-shifting ink—being used on bills. 9000 Blue Mound Rd., 817/231-4000, moneyfactory.gov, free.

4. Stage coaches
In 2000, a group of Texas Christian University alums formed Amphibian Stage Productions, naming it after the mascot of their alma mater, the horned frog. "I worried that our aesthetic might be too much for people," says artistic director Kathleen Culebro. (One play, by Shaun Prendergast, was performed in the dark.) Evidence proves otherwise: Ever-growing audiences attend the readings and fully staged productions. 817/923-3012, amphibianproductions.org, readings by donation, plays $20.

5. Swim at your own risk
Created by a dam on the West Fork of the Trinity River in 1914, the 3,500-acre Lake Worth was once a pleasant retreat for a swim, but in recent decades it's become a murky, shallow pool. Quirky tales have grown up around it, including sightings of a goat man—a monster with a human body and the head of a goat—in 1969.

6. Billionaire benefactors
Once riddled with gambling joints and brothels, Sundance Square takes its name from the Sundance Kid, who hid out there between robberies. In the '70s, the billionaire Bass family began buying up blocks of property and turning them into a lively neighborhood. The area is now home to the Sid Richardson Museum (309 Main St., 817/332-6554, sidrichardsonmuseum.org, free); the Fort Worth Water Garden, designed by Philip Johnson (1502 Commerce St.); and Bass Performance Hall, remarkable for its superb acoustics and the giant angels on its façade (4th and Calhoun Sts., 877/212-4280, basshall.com).

7. Herd mentality
Fort Worth was nicknamed Cowtown when it was a major stop along the Chisholm Trail, a cattle-drive route from southern Texas to Kansas. Today, the Stockyards district still has brick streets, saloons, and two daily (albeit symbolic) cattle drives. At 11:30 a.m. and 4 p.m., tourists line up to watch 15 Texas longhorns amble down East Exchange Avenue. fortworthstockyards.org, free.

8. Light touch
Even in the Cultural District, with four other world-class museums nearby, architect Tadao Ando's gorgeous Modern Art Museum of Fort Worth exists in a world of its own. The five glass pavilions appear to float on a shallow reflecting pool; inside, skylights illuminate works by the likes of Roy Lichtenstein, Jackson Pollock, and Cindy Sherman. 3200 Darnell St., 817/738-9215, mamfw.org, $10.

9. Field of vision
There are no bad seats at LaGrave Field, where the minor-league Fort Worth Cats compete with downtown's skyscrapers in the distance. During evening games, fans gather by the left-field foul line for the best views of the skyline at sunset—and the city's best burgers, at the ballpark outpost of legendary Kincaid's. 301 NE Sixth St., 817/226-2287, fwcats.com, games from $4.

11. Whole lotta Love
Texan chef Tim Love couldn't resist naming his latest restaurant, a gourmet burger and shake joint, the Love Shack. Nearly everything is made from scratch, including the tangy "love sauce" on burgers and the frothy root beer served on tap. 110 E. Exchange Ave., 817/740-8812, shakeyourloveshack.com, burgers from $3.50.

12. A place to hang your hat
Cowhide headboards, saddle-seat bar stools, and lamps made from spurs and horseshoes are all part of the Western decor in the 52-room Stockyards Hotel, which swung its brass-and-wood doors open in 1907. The gun of outlaw Bonnie Parker (of Bonnie and Clyde) is displayed in the suite where she stayed in 1932. 109 E. Exchange Ave., 800/423-8471, stockyardshotel.com, from $169.

14. Go on, order a shot
Cowboy hats, donated by regulars over the years, cover the walls and ceiling of the White Elephant Saloon, which was named after a local 1880s-era bar whose owner, Luke Short, killed a man in a shoot-out. Costumed actors restage the showdown every February 8, but most other nights, when couples two-step to country-and-Western acts, the bar is about as laid-back as you can get. 106 E. Exchange Ave., 817/624-9712, whiteelephantsaloon.com.

15. Who you callin' a lady?
Gutsy women of the West—including Annie Oakley, Georgia O'Keeffe, and the Dixie Chicks—get their due at the National Cowgirl Museum and Hall of Fame. Exhibits present artifacts beside firsthand accounts from ranch women, rodeo stars, and jockeys. You can be filmed on a bucking bronc and have the scene superimposed over footage from a 1920s rodeo—and then download the video results for free. The gift shop stocks feisty souvenirs, such as mugs that read "My heroes have always been cowboysgirls." 1720 Gendy St., 817/336-4475, cowgirl.net, $8.

17. Star-studded events
Nearly every month from March through November, people gather outside the Museum of Science and History for free stargazing parties co-organized by the Fort Worth Astronomical Society. Members point out phenomena such as double stars, which appear to be a single star until seen through telescopes. 1501 Montgomery St., 817/255-9300, fwmuseum.org.

18. Rapid transit
While dams were being repaired in 2004, county officials had stone and concrete slabs installed along a 3.5-mile stretch of the Clear Fork of the Trinity River. The result is a free urban white-water course that has Class II and III rapids after a rain. Kayak put-in point near the south entrance of Trinity Park at 1200 S. University Dr.

19. Meat market
Fort Worth's trendiest nightspots are clustered within a few blocks of Sundance Square. The corner patio of restaurant and bar 8.0 is a prime spot for scoping out the crowds—and scouting the local acts that play four nights a week on the outdoor stage. 111 E. Third St., 817/336-0880, eightobar.com.

20. Like something out of Dallas
Built in 1904, the Georgian Revival mansion Thistle Hill recalls the fabulous lives of wealthy Texan cattle barons. As successive owners, the Wharton and Scott families hosted formal dinners, teas, and late-night poker parties in the 11,000-square-foot home. 1509 Pennsylvania Ave., 817/336-1212, thistlehill.org, tour $15.

21. Deep in the art of Texas
Each April, more than 400,000 people descend upon downtown for the four-day Main Street Fort Worth Arts Festival, where the 213 artists who made it through the annual jury selection sell their work. There's also a short-film festival, as well as dance and theater performances on stages between artists' booths and food stands. 817/336-2787, mainstreetartsfest.org, free.

24. Mall of Americas
As Fort Worth grows, it's becoming more diverse: Nearly a third of the population is Hispanic. At La Gran Plaza, more than 350 businesses catering to (and owned by) the Spanish-language community sell everything from imported salsa to quinceañera gowns. 4200 S. Freeway, 817/922-8888, lagranplazamall.com.

25. Ain't it sweet
A.C. "Ace" Cook, a noted collector of pre-1970s Texan art, displays 70 museum-worthy paintings in The Bull Ring, his unassuming Stockyards ice cream parlor. He's often hanging around, ready to give an impromptu lesson on gems such as Douglas Chandor's enigmatic portrait of a gardener—"It's the Mona Lisa of the bunch," he says. 112 E. Exchange Ave., 817/624-2222, ice cream $2.50.