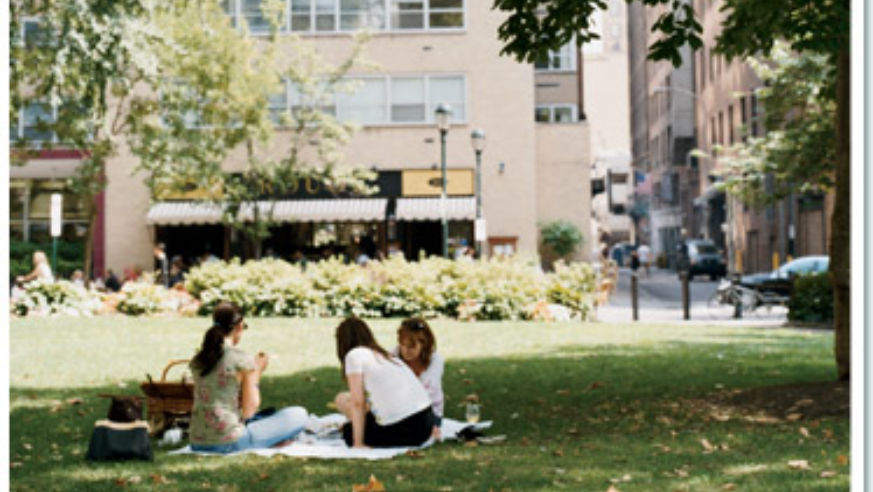 Forget the Liberty Bell. Artists, designers, and restaurateurs are rewriting this city's history.

1. Yes, yes—there are cheesesteaks
Two of the oldest cheesesteak restaurants in South Philly—Pat's and Geno's—have a long-standing feud worth weighing in on. Pat's claims to have invented the cheesesteak. Geno's claims to have perfected it. Both serve equally generous portions of rib-eye steak, grilled onions, and Cheese Whiz on freshly baked Italian rolls; we'll let you decide which is worth lining up for. Pat's, 1237 E. Passyunk Ave., 215/468-1546, patskingofsteaks.com, $7.50; Geno's, 1219 S. Ninth St., 215/389-0659, genosteaks.com, $7.50.

2. There's actually affordable art
With its cheap rents and thriving gallery scene, Philly has become a haven for artists fleeing pricier New York. "You can make your mark quickly here by filling a void," says Daniel Fuller of the Philadelphia Exhibitions Initiative, which funds galleries. The upside for visitors: There are plenty of places to pick up one-of-a-kind pieces, such as the Art for the Cash Poor festival, where nothing is priced over $200 (inliquid.com, June 13–14), and the Art Star Craft Bazaar, where 150 painters, sculptors, and designers unload their works (artstarcraftbazaar.com, May 30–31).

3. A river runs through it
Date night in Philly could mean dinner and a movie, or something more intrepid: a moonlight kayak tour. Starting at dusk in the summer, instructors from Hidden River Outfitters provide a half-hour lesson, followed by a 90-minute guided paddle on the Schuylkill River. 215/222-6030, schuylkillbanks.org, $50 per person.

5. Backstreets are laid bare
Even old-timers don't know all of the narrow streets tucked between the main arteries of the city's oldest neighborhoods. Good thing the guides from the Philadelphia Society for the Preservation of Landmarks have a handle on things. One of the group's most popular walking tours is Littlest Streets East of Broad, which winds its way through a small-scale section of Center City. 321 S. Fourth St., 215/925-2251, philalandmarks.org, $10.

6. Steve Wynn can't touch this
More than 100,000 pieces of glass make up The Dream Garden, a mosaic designed by Philadelphia artist Maxfield Parrish in 1916 that graces the lobby of the Curtis Center. Ten years ago, the Tiffany-made rural-landscape mural was sold to casino mogul Steve Wynn, whose plan to move it to Las Vegas provoked a citywide outcry. The Pew Charitable Trusts stepped in with funding to keep the masterpiece in Philly—and Wynn stepped back into the shadows. 601–645 Walnut St.

7. Designers sell the clothes off their backs
Mary Clark and Megan Murphy opened Vagabond eight years ago to have a place to peddle their own lines (Stellapop and City of Brotherly Love, respectively). Now, the shop sells vintage clothing alongside the works of other local designers, such as Bario-Neal's jewelry made from reclaimed metals. 37 N. Third St., 267/671-0737, vagabondboutique.com.

8. You can dance till dawn in a diner
Mark Bee, a local restaurateur, bought the Silk City Diner two years ago, polished its grease-coated, 1950s-era pink Formica counter, and opened a club. Now, it's the place in town to dance on weekend nights, when DJs spin everything from early '80s Siouxsie and the Banshees to the latest by Beyoncé and M.I.A. 435 Spring Garden St., 215/592-8838, silkcityphilly.com, cover from $5.

9. They make good Impressionists
Albert Barnes, a Philadelphia chemist, spent a fortune in the early 1900s filling his stately beaux arts–style villa just outside the city with an eclectic collection of 4,000 pieces of art: Renoirs, Monets, and Matisses are clustered side by side with devotional folk-art paintings, early American hand-forged iron decorations, and African tribal masks. The pieces will be on display in the mansion for only a couple more years; after that, the Barnes Foundation will move the entire collection to a much larger—but decidedly less atmospheric—museum being built in Center City. 300 N. Latch's Ln., 610/667-0290, barnesfoundation.org.

10. Clothes with a Grace Kelly pedigree
Shopping at Jennifer Fitch's vintage-resale store, Philadelphia Vintage, is like gaining access to the closet of an eccentric millionairess. While Fitch says she isn't into things that are "too costumey," the shop, just off Rittenhouse Square, is stocked with items that seem beautifully fitted for the stage: fur capelets, Bakelite bangles, Gucci bags, and costume jewelry from the 1950s and '60s. 2052 Locust St., 215/964-9646.

11. There's an art to sleeping
In the city's newest boutique hotel, The Independent, works by local artists hang both inside and outside the restored 1920s Georgian Revival building. Photographer Jenny Lynn's shots of Philly landmarks adorn the 24-room hotel's façade, and muralist Kim Senior's painting of Independence Hall spans the length of the three-story atrium. Another fun touch: The phones in the rooms are preset with numbers for more than a dozen nearby restaurants, from steak houses to Mexican joints. 1234 Locust St., 215/772-1440, theindependenthotel.com, from $149.

12. You can be your own sommelier
Liquor licenses are like gold in Philly: Because of arcane alcohol laws dating back to Prohibition, the city doles out precious few of them each year. This has led to an explosion of BYOB bistros like Pumpkin, which specializes in seasonal New American dishes such as seared duck with sweet-potato hash. But even in the fall, you won't find pumpkin on the menu—that's just the pet name husband-and-wife owners Ian Moroney and Hillary Bor have for each other. 1713 South St., 215/545-4448, duck $24.

13. Beer goes by another name
It doesn't matter what bar you belly up to in Philly—if you ask for a lager, you'll get a pint of Yuengling (pronounced ying-ling), brewed in nearby Pottsville, Pa. Don't believe us? Try your luck at local favorite Dirty Frank's, and see what the bartender pours in your mug. 347 S. 13th St., 215/732-5010.

14. The gelato will make you giggle
It's a testament toCapogiro (Italian for "giddiness") that the 6-year-old gelato shop in Center City stays busy even in the dead of winter. Devotees swear by the 27 unusual homemade flavors, including mascarpone and fig, sweet potato with pecan praline, and Mexican chocolate spiced with ancho chilies, chipotle, and cinnamon. 119 S. 13th St., 215/351-0900, capogirogelato.com.

15. There's a garden fit for a king
Quaker John Bartram earned the title King's Botanist for designing the first garden in North America devoted to native plants in 1728. The 45-acre Bartram's Garden continues to flourish at his former estate 25 minutes from the city, where you can spot specimens of Franklinia alatamaha, a tree with dogwood-like flowers that Bartram found in Georgia and named for his pal, Benjamin Franklin. 54th St. and Lindbergh Blvd., 215/729-5281, bartramsgarden.org, admission to the grounds is free, tour $5.

16. Sports superstitions seem to have merit
Fans believe a curse descended upon the city when the 945-foot One Liberty Place skyscraper was built in Center City in 1987, trumping City Hall as Philadelphia's tallest building. The reason? The city's professional sports teams had enjoyed a run of great seasons in the 1970s and early '80s, but the wins ended when the bronze statue of William Penn atop City Hall lost its status as the highest point in Philly. Two years ago, ironworkers affixed a four-inch replica of the Penn statue to the highest beam of the Comcast Center, now the city's tallest building. And last October, the Phillies won the World Series. We're just sayin'...

17. It's peaceful at its core
There's no question that Rittenhouse Square is one of the most tranquil spots in Center City, with its wide diagonal walkways, towering oak and maple trees, and central plaza surrounded by an elegant balustrade. It still feels like a retreat even when there's a lot of activity—from the farmers market on its north end every Tuesday and Saturday morning to the annual Rittenhouse Row Spring Festival (May 9), during which Walnut Street is closed off to traffic so shops and restaurants can spread out onto the square. Walnut St. between S. 18th and S. 20th Sts.

18. A cinematic setting
Walk into XIX (Nineteen) restaurant and bar at the Park Hyatt-Bellevue and you may think you've entered Katharine Hepburn's classic 1940s romantic comedy, The Philadelphia Story: The lounge exudes glamour with its elaborately molded, early-1900s rotunda, 20-foot pearl chandelier, polished marble columns, and leather banquettes. What makes this the place to be past sunset, though, are the twinkling views of Philadelphia from the arched windows 19 stories above the streets. 200 S. Broad St., 215/790-1919, parkphiladelphia.hyatt.com, martini $12.

19. Italy is within shelf's reach
Philly's go-to place for everything Italian, DiBruno Brothers, was opened in 1939 by three siblings from Abruzzi, Italy: Thomas, Joe, and Danny. Every inch of the shop in the Italian Market, a 14-block neighborhood in South Philly, is packed with wheels of cheese, giant vats of olives—and regulars jostling to place orders at the deli. 930 S. Ninth St., 215/922-2876, dibruno.com.

20. Go-kart art
At the Kensington Kinetic Sculpture Derby, being held this year on May 16 in north Philly, go-karting is taken to absurd heights: Contestants dress up in wacky costumes and rumble down Frankford Avenue in rickety, homemade art projects on wheels—the more outlandish, the better. (Think two men dressed as aliens piloting a mini spaceship and you're on the right track.) Naturally, awards are given out for the best dressed, as well as for the vehicle that falls apart in the most spectacular fashion. 2515 Frankford Ave., 215/427-0350, kinetickensington.org.

21. Gossip informs the architecture
It's hard to believe people actually live on Elfreth's Alley, a 15-foot-wide lane dating back to 1702. The country's oldest residential street almost didn't make it this far—it was so derelict in the early 1900s that developers tried to demolish it numerous times, only to be thwarted by stalwart tenants. The alley's homes have since been perfectly restored, with no detail overlooked: Houses 120 and 122 still have a "gossip door" connecting them on the inside. 215/574-0560, elfrethsalley.org, tour $5, daily Apr.–Oct.

22. You'll go home smelling minty
Co-owners and partners Steve Duross and James Langel make most of the all-natural soaps, shampoos, and body scrubs at their boutique, Duross & Langel, infusing them with scents like ginger and mojito. They also stock specialized balms for afflictions both concrete (PMS) and crunchy (lack of concentration). 117 S. 13th St., 215/592-7627, durossandlangel.com.

23. Vinyl is still king
Mike Hoffman, the ownerofA.K.A., the largest—and coolest—independent record store in the city, knows how to keep his music-obsessed regulars happy. Not only does he organize his vinyl and CDs by themes you'll never see at a chain store, such as "prison work songs" and "psychedelic Japanese rock," he also brings in up-and-coming musicians, like singer-songwriter Kimya Dawson, for free shows on the second-floor stage. 27 N. Second St., 215/922-3855, myspace.com/aka_music.

24. A haunted house in the big house
TheEastern State Penitentiary, which once held the likes of Al Capone, has figured out how to trade in on its notoriety since closing in 1970. In recent years, it has staged dramatizations of bank robber Willie Sutton's 1945 escape and jail-themed ice-sculpture contests. And every Halloween, the cell blocks are turned into a haunted house, complete with escaped inmates and zombie guards lurking in the darkened corners. 22nd St. and Fairmount Ave., 215/236-3300, easternstate.org, haunted house from $20.

25. Many happy trails
Getting lost in Fairmount Park, one of the largest city parks in the country, is a welcome rite of passage for new residents and visitors alike (fairmountpark.org). Rent a bike and grab a map of the 9,200-acre woodland at Trophy Bikes, near the Schuylkill River Trail (3131 Walnut St., 215/222-2020, trophybikes.com, from $20). One sight not to miss: the replica 16th-century Japanese House, with its cypress-wood walls, paper-screen doors, and manicured gardens (N. Horticulture Dr., 215/878-5097, shofuso.com, $6).