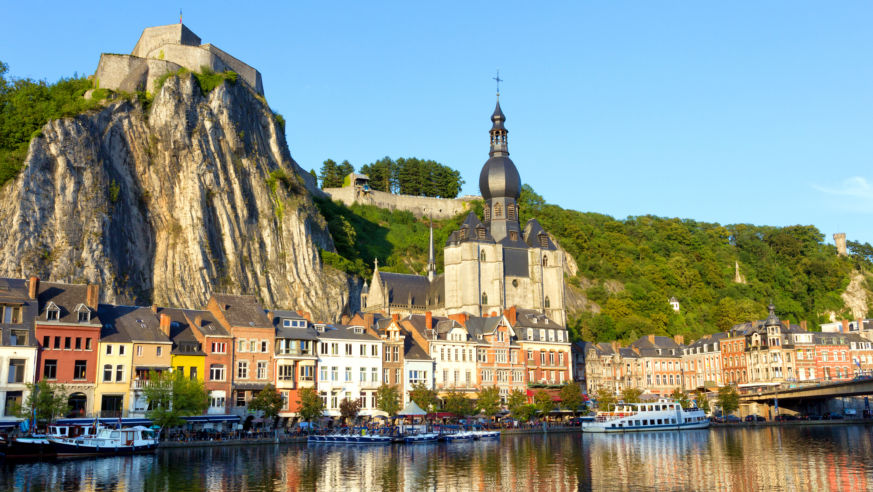 Set on the banks of the Meuse River, Dinant, Belgium, is fairytale-like, backed by an imposing high cliff where the Citadel rests.

From classic Belgian waffles to fanciful delights like Mini-Europe amusement park, this little country is big on culture, cuisine, and creativity.

Belgium pops off the map, alive with modern, artistic lodgings, unconventional museums, and beloved regional food and beer. During a 10-day trip through Brussels and Wallonia, I made sure to hit the most popular travel sites, including Waterloo, Bastogne, and Brussels, but I also made a point to stray from the traditional spots…and I was glad I did. Ready for a grand tour? Here are 29-plus reasons you’ll love Belgium as much as I did.

Brussels is the home of the European Union and a truly international city. The beautiful Grand-Place and infamous Manneken Pis are must-sees, but for a different perspective, take a bike tour with Pro Velo; it’s a unique way to admire the city’s diverse architecture and chat up a local (provelo.org). My guide, Riet Naessens, gave me a tour focused on the city’s art deco and art nouveau architecture through burgeoning and luxurious neighborhoods I might not have reached on my own. We passed by designs by some of art nouveau’s most famous architects, Victor Horta and Paul Hankar. Stunning glasswork by artist Ernest Delune at Rue du Lac 6, often seen in art history textbooks, was a highlight, as was the Horta Museum, a World Heritage Site. Pro Velo also offers a popular Beer and Breweries tour, which I’d warn beginning bikers against for obvious reasons.

Ingesting and investing in some chocolate while touring Brussels is crucial for any visit. Laurent Gerbaud has some outstanding chocolates, many mixed with tart and sweet dried and candied fruits (chocolatsgerbaud.be). Gerbaud’s interactive workshops offer students the opportunity to make and taste their own concoctions. His shop also has a café, so take a seat and enjoy the full chocolate experience. It’s close enough to do some oh-so-convenient chocolate shop–hopping at Place du Grand Sablon, where many of Belgium’s top chocolatiers have stores.

For another sweet Brussels fix, walk a few feet from the popular naked Manneken Pis statue to feast on a Brussels-style waffle with chocolate, whipped cream, and strawberries at the Waffle Factory (wafflefactory.com). When in Brussels…

Next up: a trip to the Atomium, a bizarre remnant of the 1958 World’s Fair, which might be the very definition of interesting and offbeat. This structure symbolizes an iron crystal expanded 165 billion times and houses an exhibition space. Nearby is another weird find, Mini-Europe, where you can walk among famous European monuments in miniature, including Big Ben and the Eiffel Tower (minieurope.com). Kids are the perfect audience for Mini-Europe—as are adults on the hunt for funny Instagram photos.

Dinant: Paddle through town and discover a new way to make music.

The fairytale-like setting that makes up Dinant is marked by a grand 13th-century church on the banks of the Meuse River, backed by an imposing high cliff where the Citadel rests. To take in nature, go kayaking on the nearby Lesse River with Olivier Pitance of Dinant Adventures (dinant-evasion.be). Small rapids turn to quiet currents and revert back again as you paddle and float by rock outcroppings, lush forests, and medieval castles.

In town, don’t miss the House of Pataphony, where you can expand your mind making music with everyday objects you wouldn’t normally think to “play,” from a chandelier made of cutlery to antique keys (pataphonie.be). The wildly inventive museum was dreamed up by instrument maker Max Vandervorst. It makes sense that it’s located in Dinant, the home of Adolphe Sax, the inventor of the saxophone. You can visit his home, now a small interactive museum (sax.dinant.be). Stay nearby in a castle at La Saisonneraie (from about $168 per night, lasaisonneraie.be), a former château in Falaën that tempts guests with exceptional croissants for breakfast.

If you’re looking to do all of this and still take a breath, you’ll want to stay in Brussels for few days. The chic Hilton Brussels Grand Place is well situated for guests to comfortably take on the city by foot (from about $245 per night, hilton.com).

Start your morning trying Liège waffles at the best place in town, Maison Massin (Rue Puits-en-sock, 6-8- 4020 Liège). It’s where the locals get their waffles. Choose from traditional Liège waffles, sugary, chewy waffles that are ovular and unevenly shaped, or more embellished versions such as grilled strawberry or rhubarb. Sunday is market day in Liège, and whatever you’re craving or coveting, you’ll find it at La Batte, the oldest and largest market in Belgium. Local produce, cheese, fish, clothing, and books are all ripe for the picking at this riverside shopping mecca (liege.be).

From the market, walk to Curtius Brasserie to sample Belgian craft beers (lacurtius.com). En route, you’ll want to snap a photo of the Mount Bueren stairs, an epic 374-step staircase located just beside “Brasserie C.” Once inside the beer hall, there’s an exciting energy. Started by young entrepreneurs, this Belgian brewery is housed in a former monastery. You can take a tour of the production area and pair cheese or meatballs with beer on the lovely outdoor terrace.

Avant-garde art lovers, your new haunt is the Cité Miroir, an unusual cultural venue (citemiroir.be). Exhibitions are held in a 1930s building once home to public baths and a swimming pool: The remnants of still remain—works of art in themselves. Locals may tell you they learned to swim there.

For dinner in Liège, you have to try boulet, a traditional beef-and-pork meatball that’s highly popular in the region. One of the best places to feast on boulet is Amon Nanesse, where large meatballs are served up in sweet sauce consisting of a mixture of pears and apple syrup, wine, onions, and peket, a local spirit (maisondupeket.be). Naturally, boulet is best complemented with a heaping helping of crispy fries. I had a boulet connoisseur introduce me to this filling dish: Sebastien Laviolette, from la Confrérie du Gay Boulet, is part of a guild of folks who make it their mission to secretly taste test meatballs at restaurants throughout the region and rate the best.

Many of these Liège attractions are reachable on foot from both the historical center and boutique Hotel Neuvice, where 10 contemporary rooms surround an open-air patio (from about $109 per night, hotelneuvice.be).

Mons is a university town with cool street art, museums, restaurants, and European charm—so much of it, in fact, that it was named the 2015 European Culture Capital. In the lively Grand-Place, pet the somewhat-freaky brass monkey statue for good luck before entering the Town Hall, Hôtel de Ville. Ascend the stairs of the 15th-century structure to take in the views of the striking square with its myriad architectural styles, ranging from Gothic to neoclassical. Inside Town Hall, admire gilded carvings and ornate tapestries, a gift to the town from France’s Louis XIV.

Climb up higher, past the city’s historic brick homes, to Parc du Château, Mons’s highest point, where the magnificent belfry is located. The only baroque-style belfry in Belgium, the belfry is a UNESCO World Heritage Site and an exceptional place for photos. Next, walk down to the Saint Waudru Collegiate Church to see its exquisite stained glass windows and 18th-century golden carriage used in the annual celebration of the saint (waudru.be).

Mons has several museums worth seeing, including BAM, the Museum of Fine Arts, and the fascinatingly bizarre, recently renovated Mundaneum, which contains a massive collection of photos, newspapers, posters, and books from Belgian philanthropist Paul Otlet, who spent nearly 50 years compiling every noteworthy piece of human thought ever published or recorded (mundaneum.org). Talk about a huge undertaking. Called a printed precursor to the internet and social networking, the museum has a partnership with Google.

After all that cerebral reflection, grab a drink at La Cervoise, where there’s a dizzying array of more than 150 beers to choose from (32/65-35-15-25). Carnivores may stay to cook a steak on a stone, the most notable entrée at this Belgian beer hall. Others may wish to snag a table outside at Ces Belges et Vous, in Grand-Place, to take in the ambience of this historic square while feasting on traditional Belgian cuisine (cesbelges.be).

One of my favorite hotels from my Belgium travels is Hotel Dream, in Mons. Nestled in the historic center, the hotel is in easy walking distance of Grand-Place—key since parking can be a hot commodity. The building is a former convent and chapel, so stained-glass windows and high ceilings are sprinkled in amid modern design and graffiti art (from about $103 per night, dream-mons.be).

One of Durbuy’s claims to fame is its title of “smallest city in the world”—or at least it used to be. The exact wording might be lost in translation, because they also had “smallest town” emblazoned in several spots. How it’s defined, I’m not so sure, but I’m chalking it up to another of the city’s endearing idiosyncrasies.

Durbuy is a charming combination of cobblestoned medieval streets, historic sights, and lovely shops. There’s a local count here who still lives in a castle overlooking the town and the Durbuy Topiary Park (topiaires.durbuy.be). Billing itself as the “largest park in the world devoted to topiary that is accessible for the public” (that’s quite the moniker), there are more than 250 plants, some more than a century old. Stroll through these green sculptures, and you may recognize some of the shapelier box trees, including a larger-than-life topiary of Pamela Anderson on the beach, Manneken Pis from Brussels, jumping jockeys, ducklings, elephants, and several other creatures great and small.

Shop in La Vraie Confiture du Durbuy for local artisanal jams and sweets for your friends (and yourself), then grab a traditional unfiltered amber brew at Marckloff Brewery, where beer is produced in small batches on site (confitureriesaintamour.be). Stay one or more nights right in town at Le Sanglier des Ardennes, a modern hotel overlooking the Ourthe River that serves a fabulous breakfast (from about $90 per night, sanglier-des-ardennes.be).