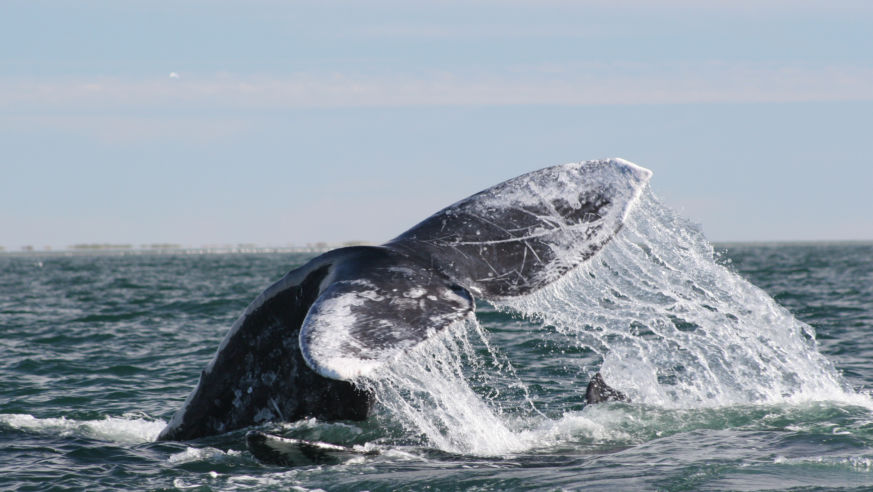 Gray whales off the Baja coast.

There's no question that Africa's legendary wildebeest migration is a bucket-list dream for nature travelers. But the fact is, Africa is expensive to get to, even for a budget safari. If you're fascinated by epic wildlife pilgrimages, here are three amazing phenomena you can witness without leaving North America.

Gray Whales
October marks the beginning of the world's longest mammal migration: the epic journey of the Pacific gray whales from their summer feeding grounds in Alaska to the birthing and nursery lagoons of Mexico's Baja Peninsula. When the northern waters begin to freeze, the whales take a cue to head south, traveling 24 hours a day to cover more than 5,000 miles. Gray whales swim very close to the coast and are often seen from shore, revealed by their spouts as they exhale. By December the first of the whales—usually pregnant females—have reached the warm, protected waters of Baja, preparing to give birth and raise their young. In February and March, whale-watchers who visit the subtropical lagoons are often treated to close-up encounters with gentle mothers and their young—it's not uncommon for a friendly whale to guide her baby right up alongside an open skiff to show it off to delighted tourists.

The Pacific coast offers excellent gray whale watching in the winter and spring. Whales are frequenty spotted from Oregon's many roadside pull-offs along the ocean (bring binoculars for the best view), or scout for spouts from Point Reyes National Seashore north of San Francisco. To come closer, consider a boat-based outing. Various day-tour operators and marine education groups offer whale-watching cruises, such as the Oceanic Society's naturalist-led 3-hour trip out of Half Moon Bay on weekends from December through May. For the ultimate thrill, book a Baja tour with multiple excursions among the whales.

Sandhill Cranes
For nature lovers, especially bird enthusiasts, few spectacles can compete with the annual sandhill crane migration along Nebraska's Platte River each spring. From late February through early April—usually peaking in mid-to-late March—some 500,000 sandhill cranes stage along the riverbanks to feed and build up fat reserves. The tall, graceful birds are accompanied by thousands of waterfowl, shorebirds and other species that also migrate through the area, creating a cacophonous frenzy in the marshes.

Fort Kearney State Historical Park serves as the central information point for crane watchers each spring, with maps and guidance for how to watch from the many viewing decks and bridges in the Kearney and Grand Island area where the greatest number of cranes congregate. Several roadside turnouts offer a chance to see cranes from one's car, though the best experience is from within a specially designated blind. Rowe Sanctuary, operated by the National Audubon Society and Crane Meadows, a private non-profit nature center, offer sunrise and sunset blind tours for close-up views of cranes along the river. Reservations are required, and the cost is $15-18 per person. For more information on viewing the crane migration, consult Nebraska Game and Parks.

Monarch Butterflies
With the first frosts of autumn in southern Canada and the northeastern U.S., monarch butterflies take to the skies, drawn south by an innate compass that remains a mystery to scientists. Flying 50 miles a day for two to three months—up to 3,000 miles in all—they arrive at their winter roosting grounds in Mexico's central highlands by early November. The fir forests of this remote region of Michoacan provide just the right microclimate for the tens of millions of butterflies that congregate here, finding refuge in the fog and freezing rain at 10,000 feet by clinging together to the trunks and brunches in great clumps. At first sight they resemble heavy cloaks of autumn leaves, till the sun comes out to warm their wings and they swirl into the air in a fluttering cloud of orange. This is the only place in the world where one can literally hear the sound of butterfly wings beating. The millions of gossamer orange and black-veined wings create a gentle hum as the monarchs float about, sometimes landing on an enchanted visitor's head or hand. Once the warm winds of spring arrive in early March, the monarchs fly once again, following the blooming milkweed that sustains them on their northward journey.

Travelers who want to stand among the monarchs must travel into the mountains above the former silver-mining village of Anguangeo to one of several butterfly sanctuaries that are accessible on foot via a steep hike or by horseback. A guided package tour is the best approach; most are approximately one-week affairs that typically begin and end in Mexico City and include other natural and cultural highlights in addition to the butterflies.