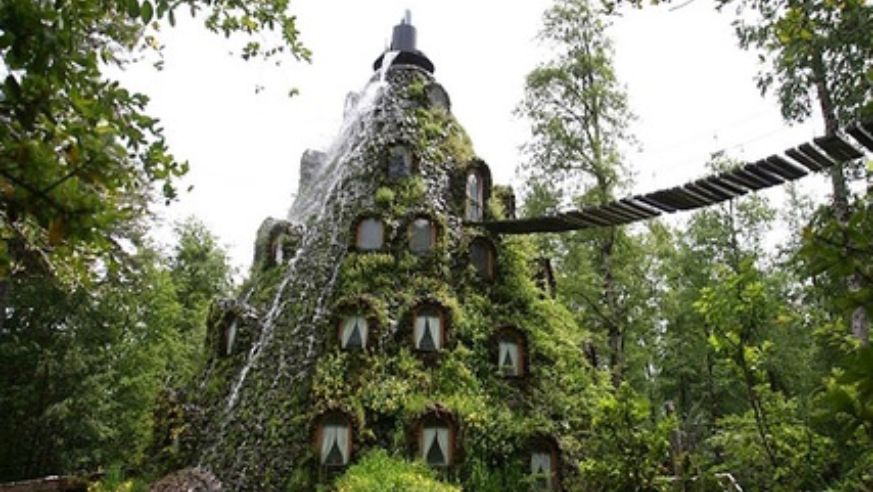 We were excited to learn yesterday that Chile plans to invest $4 billion to renew its airline fleet between 2011 and 2013. Even before this news, however, we've had Chile on the brain in a big way.

In putting together our November issue a few months back, I came away with a new entry for my own personal Travel Bucket List: a week of stargazing, pisco sours, and midnight horseback rides at the Elqui Domos astro lodge, near Chile's Atacama Desert.

But the country has several other new attractions to add to its appeal:

This month the downright surreal 150,000-acre Huilo-Huilo Biological Reserve is adding yet another weird hotel to its roster. The Andean rainforest reserve, 530 miles south of Santiago, already has one hotel shaped like a baobab tree (aptly named the Baobab Hotel) and a 13-room Magic Mountain Lodge, a conical, plant-covered cross between a gnome's hat and a hobbit-hole (pictured). Somehow, they're topping even those architectural marvels with their upcoming 19-room addition, A World Fungi, which will take the form of a giant mushroom. Considering that starting rates for the existing properties bust our budgets a bit, we'd opt to stay in one of the reserve's ten Canopy Village treehouse cabins, with five-person accommodations from about $83 per night, and just wander around the wackier buildings like a confused tourist, while taking advantage of all the other attractions on site—from hiking trails and hot springs to fly-fishing excursions and minigolf. (Huilo-Huilo Biological Reserve, cabins $83, huilohuilo.com)

In April 2010, the Transatacama railway made its maiden voyage, carrying passengers through a day-long exploration of some of the most scenic—or, at least, most historic—sections of the Atacama Desert, one of the world's driest expanses. The 62-mile round trip includes two meals, an on-board musical performance, and stops at the Precolumbian Cerros Pintados geoglyphs, with over 300 individual large-scale rock drawings; the colorful village of La Tirana, home to one of Chile's most vibrant religious festivals, Fiesta de la Tirana; and of course, a handful of abandoned mines and spooky, preserved mining towns. The train departs Saturday mornings from the coastal city of Iquique, and returns around 7pm. (Ferrocarríl Transatacama, classic tour $168, transatacama.com)

A significantly less dusty experience awaits at the new (and exceedingly charming) Palafito1326 Boutique Hotel, opened in October 2009 in the village of Castro, on the Chiloé archipelago 726 miles south of Santiago. The 12-room property takes its architectural cues from the 19th-century houses of the Gamboa neighborhood in which it was built—propped up on timber stilts along the water's edge, using salvaged larch shingles for the exterior and native wood for the floors of the guest rooms. The overall vibe is upscale rustic: Think modern fixtures, a neutral palette, fluffy textiles woven from local wool, and large windows, many of which overlook the Gamboa River and Castro's fjord. Elevated walkways connect the rooms with large terraces and a light-filled communal living and dining room. (Palafito 1326, doubles from $92, palafito1326.cl)

Have you been to Chile? If so, tell us your favorite places in the country!