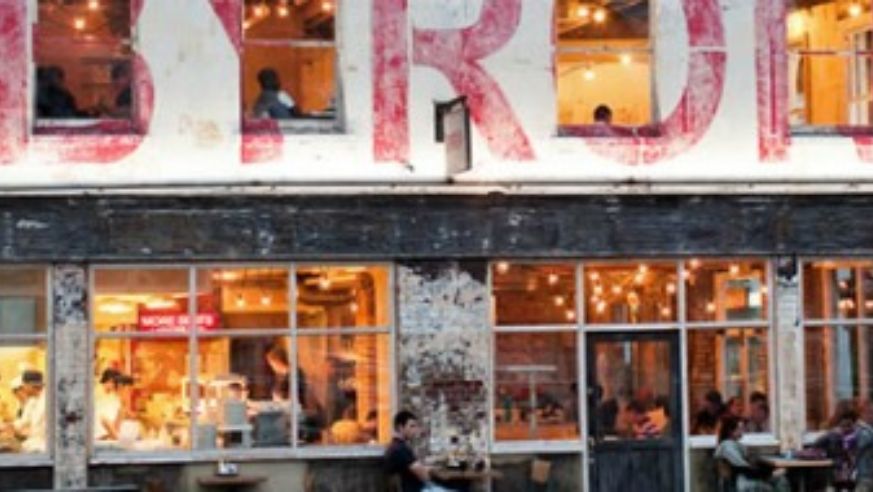 Americans visiting London usually want to taste some of the local classic dishes, such as a plate of fish n’ chips and a pint of ale. But even die-hard travelers will admit that London’s iconic dishes are fried and fatty, which can be a bit overwhelming when eaten meal after meal after meal. As an alternative, white-table restaurants are pretty expensive, to the point it can seem like your credit card balance is having liposuction.

Visitors needing an affordable restaurant may want to check out the city’s smorgasbord of sit-down, “quick service” chains. These venues have relatively healthy menus, speedy service, and clean bathrooms, making them local favorites.

Another plus, the meals are often as tasty as they are affordable. I’m defining “affordable” as a vacation budget of $25 (under £15) per person for two courses, excluding wine or drinks.

Here, then, are some picks for the best London quick-service, sit-down chains.

Some Londoners insist that the best burger you can get with speedy, sit-down service is from Byron, a gourmet burger chain that’s grown to 19 UK locations since its founding in 2007. But the secret to Byron’s success may lie less with its juicy organic mincemeat burgers than with its tasty chips, served with your choice of garlic mayonnaise or ketchup. Other popularity factors for the mini-chain include its modern decor, lively music, family-friendly bonhomie, and dinners that cost only £10 plus the cost of a pale ale or a craft beer. byronhamburgers.com

The British are so devoted to Indian food that some locals joke that chicken tikka masala is the national dish. But Indian food is more than tikka, and the first chain to bring street food and regional dishes to London was Masala Zone, launched in 2001. It now has seven locations in prime areas, such as Soho and Covent Garden. The start of the menu is thali, a complete meal of several small plates served on a metal tray, for about £10. For instance, dhai puri are little pastry cases with a mixture of chick peas, tamarind sauce, and yoghurt. Stuff the one whole in your mouth and bite, so that it explodes with a sweet-and-tangy taste. You can get in and out in under 45 minutes if you want, or linger for two hours. masalazone.com

Ideal pit stop for families with kids, this restaurant has crowd-pleasing food with both spicy and non-spicy dishes, large tables to share food on, a welcoming attitude toward kids and teens, and, unlike anywhere else in London, free refills on soda. The Nando’s signature dish is a half-a-roast chicken doused in a mild chili sauce. The South African restaurant chain specializes in “peri-peri" chicken, a chili dish created by Portuguese settlers in Mozambique. Choose how spicy you like it, and watch your chicken be cooked in the open kitchen. The system is quick, yet you can eat at your own pace. £10 for half a chicken, with two regular sides. Nando’s is the city’s fastest-growing quick-service chain, with 57 prime London locations gaining rapidly in popularity since its 1992 arrival in the UK. (There’s one US location, in Washington, D.C.) nandos.com

When Wagamama opened in London in 1992, it introduced Londoners to South-East Asian flavors blended with Japanese noodle dishes. Menus were full of edamame (steamed soy beans) with ramen, or else strips of steak laid on beds of soba noodles, dressed in a sweet soy sauce. Today, the menu remains much the same and the prices also remains affordable (meal for two with drinks at under £35, or about $50). Wagamama still has a minimalist setting, such as long communal tables surrounded by white walls and a friendly attitude toward kids and teens. True, London doesn’t have a lock on Wagamama anymore. There are 37 overseas locations, including a few in the US in Boston. But there are 76 in the UK, with three more opening in London this year. wagamama.com

Run by New Zealanders, this chain touts Aberdeen Angus beef burgers, but you can also pick veggie, chicken, lamb or venison versions. Pick your toppings and add chips for about £10 per meal. Think of it as a Chipotle for burgers. gbk.co.uk