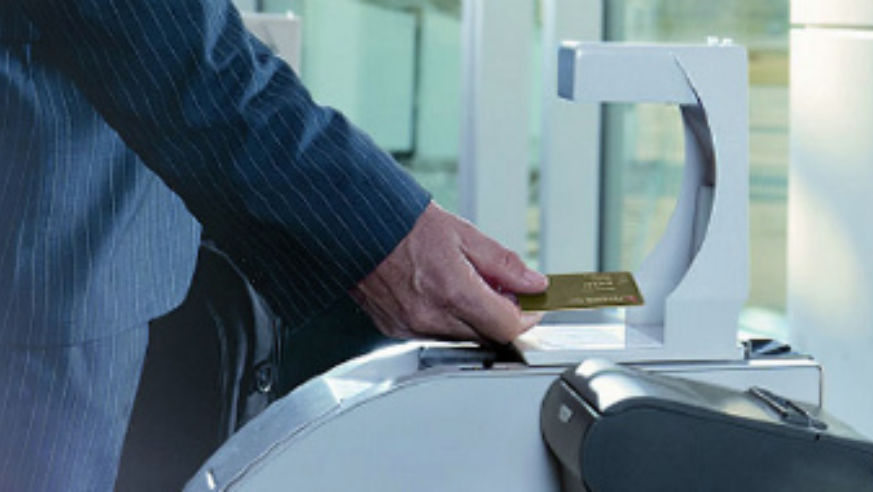 A handful of airports worldwide are trying out ways to make travelers happier. Here's a round-up of innovations that sound promising:

At some Australian airports, Qantas is testing high-tech frequent-flier cards loaded with RFID (radio-frequency identification) chips. At check-in, you tap your Qantas Club Card to a sensor and the airline's computers will text your phone with the gate number. Your card acts as your boarding pass. Machines at the gate scan your card, making for an entirely paperless process.

Checking luggage with Qantas? Use the reusable plastic tag with a wireless chip inside (which the airline sent you with your frequent flier card), hook it around your luggage handle, and check the bag yourself. The smart luggage tag talks to sensors throughout the bagging process to enable workers to track where it is, like FedEx does with packages. Qantas's site has more details on the program, which has been in testing since November at domestic terminals at airports in Sydney and three other cities.

Sometimes it's the simple things that count. About 60 Hudson News bookshops at airports nationwide will soon introduce charging stations, to help you recharge your phones for free. But it can take up to half an hour to recharge some phones. So these kiosks help travelers in an especially sensible way, allowing users to lock up their device using a personal code, similar to how safes work in many hotel rooms. While your phone is juicing up, you're free to wander around the airport.

Sometimes at the airport, a problems crops up and you can't seem to find a responsible person to help. Maybe you can't find the nearest pay phone or a pharmacy, or you're not sure when the terminal coffee shop opens, or you're upset at the lack of trash cans in the gate area. To better address such problems, London's Gatwick airport has placed signs all around its terminals inviting passengers to give its customer service staff feedback via Twitter 24 hours a day via @gatwick_airport, increasing the chance of real-time responses to complaints and concerns. A recent tweet: "@frgraphics Sorry there's no free wifi at the moment. We're working on it though. http://bit.ly/ilfLbz"

By end of summer, passengers heading to India's Delhi airport by subway will be able to drop checked luggage at one of four train stations and forget about their bags until they land at their destinations. Kiosks will enable many fliers to print their boarding passes and check their bags for flights on Air India, Jet Airways, and Kingfisher, reports Ryan Ghee of Future Travel Experience. Elsewhere in the world, many passengers can check bags at London's Paddington station (for Heathrow flights), Vienna's Wien Mitte station, Moscow's Kievsky Station, and Hong Kong Station.

Tokyo's Haneda International Airport, which opened in October 2010, has a departure hall that is far better than most, creating a sense of place. At "Edo Market," builders have simulated an early 1900s Tokyo street using traditional materials and decor. The street is lined with shops such as the century-old stationer Itoya and the 50-year old Kaneko Optical Shop. Even better, instead of Starbucks and McDonald's, restaurants serve up high-quality Japanese food.