There is something just so charming about a restaurant that lets you bring your own beer or wine. Not only is does it cut back tremendously on the bill, but it also feels more personal because you get to choose exactly the kind of tipple you know and love. As an ode to their affordable charm, I thought I would share five of my local favorites, discovered in over a decade of living in New York. If you find yourself in the city, look up one of these places—I can't promise that they won't be crowded as they're all local favorites, but I can promise a satisfying meal and an equally satisfying feeling when you pay the bill.

This pocket-size French bistro is as charming as they come. Guests line up outside for affordable French fare that tastes all the sweeter because you know you're not going to be paying a restaurant-mark-up for the wine in your glass.

A has an almost cult-like following of folks who keep coming back for French-Caribbean cuisine that is at once creative and comforting (grilled avocado topped with spinach mousse, for example).

Entering Tea & Sympathy feels like walking straight into Great Britain—the walls are decorated with British paraphernalia, the staff have accents, and they even deliver their supplies in an old-timey British car. Best of all, the English comfort food served here can be enjoyed with a cup of tea—or any bottle of wine you want to bring.

This Asian-inspired vegan restaurant focuses on fresh, local ingredients, which means that the menu changes according to what's in season. One thing you'll always find on offer is their three bean chili—a satisfying mix of kidney, pinto beans and lentils simmered with sun-dried tomatoes and chiles.

One word: Pizza (some might even say the best in all of Brooklyn). The thin-crust, brick-oven pizzas are the reason why there is always (and I do mean always) a line outside of this popular restaurant. Plan to arrive right when they open at 6pm to put in your name or you might not get in as they fill up fast.

How to Be a Packing Genius

8 Spy Gadgets That Can Improve Your Vacation

10 Places You'd Rather Be on a Wednesday 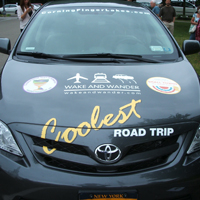 To celebrate the two towns that tied for first place in Budget Travel's annual Coolest Small Towns contest, Will McGough (the editor of Wake and Wander) took the Coolest Road Trip from Beaufort, N.C., to Hammondsport, N.Y. Here are his highlights (including stops in runners&ndash;up Damascus, Va., and Cape May, N.J.). Coolest Accommodations: Damascus Cabins, where a riverside cabin and campfire provided just the right kind of nightlife after a long drive. Coolest Restaurant: Cape May’s Mad Batter, for its crab Benedict brunch with mimosas. Coolest Activity: Hot&ndash;air ballooning in Hammondsport, where McGough marveled at the simplicity of the balloon&mdash;not much more than a basket attached to a parachute, he notes, driven only by the power of the wind. Coolest Bar: Beaufort’s Rhum Bar at the Front Street Grill at Stillwater for happy hour. Here, an “island vibe” makes for a memorable afternoon. (The signature Rhum Bar Punch is a potent mix of rum, pineapple, orange juice, and grenadine.) Coolest History: The legend of Blackbeard. The infamous pirate lived in Beaufort before he was captured and hanged. Coolest Souvenir: A bottle of Hammondsport wine. While not every location on your own personal road trip will have quite the terroir of the Finger Lakes (Hammondsport wines have been served at the White House, after all), McGough humbly suggests that a good regional wine will always top a trinket in his book. Ready to take your next road trip? Visit the App Store to download the Budget Travel Ultimate Road Trips mobile app (Android version coming shortly)&mdash;it’s free and features 70 of the most inspiring drives in the country! &mdash;Robert Firpo&ndash;Cappiello MORE FROM BUDGET TRAVEL 7 Tricks for Getting Gas for Less 5 Classic American Drives 7 Most Common Gas-Guzzling Mistakes With major theme parks now charging over $100 per adult, this summer is the perfect time to consider the array of smaller (but awesome), regional theme parks where you can get your adrenaline fix for less. Here are five parks around the country where the daily price of adult admission is under $50. Luna Park, Coney Island, NY. Luna Park's prices correspond with the number of credits each game or ride is worth, so how much you spend to enjoy the park really depends on which rides you choose to go on. For anyone as indecisive as I am, stick with the $35 four–hour Luna Park Ride Wristband or the $45 Ride and Play package, a four-hour unlimited ride wristband that comes with a 20 credit game card (both are valid daily before May 23rd and after September 7th, 2015, but only during weekdays between the two summer holidays). Blackout dates include May 25, July 3 and July 4. Please note that the wristband is only valid on Luna Park attractions, not valid on Deno's Wonder Wheel or on rides at nearby 12th Street Amusements. Dorney Park, Allentown, PA. Dorney Park is a popular theme park located about an hour outside of Philadelphia. Kids love Planet Snoopy, a fun area with attractions centered around the lovable pooch and his cartoon friends. Adult tickets are available online for $44 (or for a limited time, $39.99 if you buy them online before June 28th) while tickets for kids and seniors are $34 online. You can also purchase an 'After 4PM Admission' ticket ($29.99 online), good for visits after 4 p.m. during the summer months when the park is open late. Knotts Berry Farm, Buena Park, CA. Home to some of the country's craziest thrill rides (take one look at La Revolucion, or Rip Tide and try to argue otherwise!), Knotts Berry Farm also has calmer, more family-friendly rides. Ages 12–61 get in for $43 when purchased online, while children ages 3–11 and seniors over 62 pay $37. Check their website all summer long for additional specials like the 3-Day Advance promotion, where you can pay $40 for tickets ordered online at least three days before you go. Santa Cruz Boardwalk, Santa Cruz, CA. Nestled on the warm beaches of Santa Cruz—about 90 minutes south of San Francisco—this awesome American Boardwalk is home to giant roller coasters, mini–golf, laser tag and enough food and games to keep people of all ages busy. The best part? An all–day unlimited rides wristband is only $32.95 plus tax, or you can pay $40.95 for the same wristband, plus your choice of two of the following attractions: Mini Golf, Laser Tag, Fright Walk, Lazer Maze, Boardwalk Bowl, Climb 'N Conquer, and you'll get three bonus points for arcades and games. Take that, Disney! Cedar Point, Sandusky, OH. Probably the theme park most displayed on The Travel Channel, Cedar Point Amusement Park in Sandusky, Ohio, has earned its popularity. Home to the scariest roller coasters in the states, like Millennium Force and Mean Streak just to name a few, this is definitely one for the adrenaline junkie's bucket list. You'll get in for $49.99 when tickets are purchased online, or $45.99 when you visit the park on weekdays this summer ($49.99 otherwise). Pay $44.99 per person when tickets are purchased by June 19th, or score an 'After 4PM' ticket for $37.99 per person for late-day visits to the park. I say, the more rides for less money, the better. Some of my favorite childhood memories are from family vacations we took to California—spending the day at the Santa Cruz Boardwalk, or riding the "GhostRider" for the first time at Knotts Berry Farm (very scary at age 9!). Are there other small, regional theme parks you love that we haven't mentioned here?

Eating is one of the great pleasures of a vacation. But not all destinations are created equal when it comes to their culinary treasures. And of course, what constitutes culinary greatness is very personal&mdash;one stomach might not agree with another. We asked Budget Travel editors where they would travel for the food and their answers were inspiring (and, in some cases, surprising). See the editors' favorite foodie destinations. I have had some of the best meals of my life in Croatia, where it seemed like everyone I met had their own olive grove and pressed their own olive oil, smoked their own prosciutto and made their own wine. Other Budget Travel editors found foodie inspiration much closer to home (in the case of one editor, it's one of the very reasons she chose to call New York City home). As much as I think about food on vacation, I very rarely choose my holiday spot based on the dining options&mdash;although after reading this slideshow I am inclined to start incorporating the culinary scene into my considerations. Flip through our slideshow and see what you think&mdash;and while you're at it, tell us whether or not we missed any great places! SEE MORE FROM BUDGET TRAVEL: America's Best Food Regions How to Take Better Food Photos 25 Summer Travel Deals You Don't Want to Miss

On Wednesday June 20, blogger Will McGough will set out on a one&ndash;of&ndash;a&ndash;kind road trip, dropping in on four of the winners of Budget Travel’s seventh annual Coolest Small Towns contest. “There’s a common misconception that small towns don’t offer big opportunities,” says McGough, the editor of the blog Wake and Wander. Of course, we couldn’t agree more&mdash;BT has long celebrated the charm&mdash;and affordability&mdash;of America’s coolest towns, and this year more than ever our contest has generated excitement from the redwood forests to the Gulf Stream waters. McGough’s “Coolest Road Trip” will make stops at four of this year’s 10 winners, including Beaufort, N.C., and Hammondsport, N.Y., which tied for first place back in January, when online voting was so heated that our server temporarily crashed; McGough will also visit Cape May, N.J., and Damascus, Va. The trip will conclude on June 30, with a parade in Hammondsport. A feature story about all 10 of our Coolest Small Towns will appear in the September/October issue of Budget Travel, on newsstands August 28. McGough will make his trip in a car customized for the occasion, bearing logos for Budget Travel’s Coolest Small Towns contest and his own blog, and images of the winning towns. “The teamwork going on among these four towns is exciting,” says McGough. “They’re not saying ‘Look at me!’ they’re saying ‘Look at us!’” As he motors from town to town, McGough will post blogs from the road, sharing his own lists of “coolests”&mdash;places to stay, outdoor activities, and keepsakes&mdash;along the way. “The average guy can’t always take a week off from work and fly to some far&ndash;off destination,” says McGough. “But he can drive to Beaufort, Cape May, Damascus, or Hammondsport for the weekend. And you know what? He’ll have just as much fun.” &mdash;Robert Firpo&ndash;Cappiello MORE FROM BUDGET TRAVEL: 5 Classic American Drives 8 Ways to Save Big on Summer Travel The Pacific Coast Highway&mdash;Without the Traffic