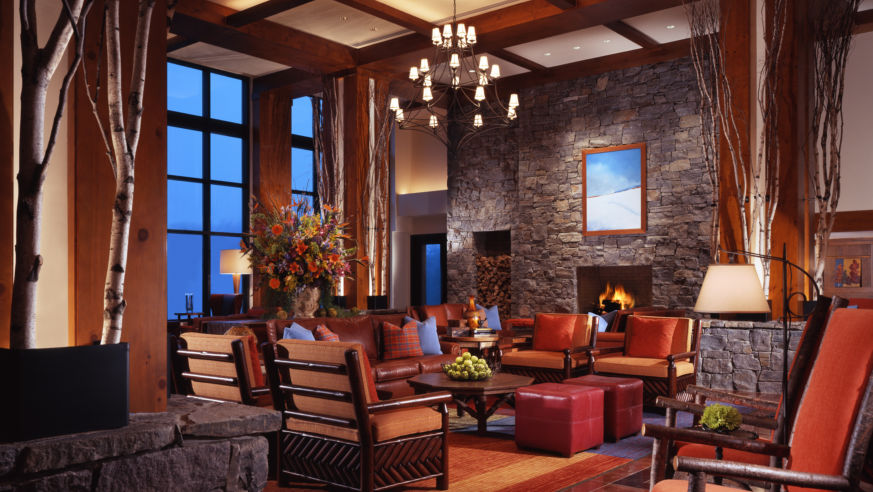 If you've never skied before, the idea of strapping yourself into a slippery device atop a mountain can seem like a recipe for a prolonged hospital visit. I know I wasn't too keen on the concept. It took a friend of mine who is an experienced skier to convince me to try it. "C'mon, if a 2-year-old can learn how to ski so can you," he told me. "Two-year-olds have a lot less far to fall than I do," I retorted. But nonetheless, I took him up on the challenge and we headed up to the Stowe Mountain Lodge in Vermont-a resort that's known for its expert runs with vertical drops of over 2,300-feet and a stellar beginner program that gets newcomers off the lifts and down the slopes within an hour.

What really convinced me to try my luck on skis wasn't the idea that I would enjoy the sport. I was pretty convinced I would hate it. It was the après-ski scene that lured me-hot chocolate by a crackling fire, romantic mountain-top dinners against a backdrop of swirling snowflakes, hot tubs overlooking the valley.

As it turns out, two days on the slopes, a ski lesson, and only one bruise later, I am a convert. I love the sport. And, as every experienced skier knows, all of that exercise and adrenaline makes the fireside hot chocolate that much more enjoyable.

Whether you're a beginner like me, or a family with small children (and if you are, check out our favorite ski resorts for families), the key to having a good time is to find the right resort. You need experienced instructors, beginners-only slopes, and a place that separates the hard runs from the easy ones so that newbies don't make the mistake of winding up on a black-diamond run by accidentally taking a wrong turn. At the same time, you need the kind of action-packed runs that will challenge the more serious skiers in your party.

With that in mind, here are five resorts that cater equally to newbies and experts. Some of them are a bit more expensive than others, but each is a worthy splurge.

Stowe Mountain Lodge, Vermont
The Stowe Mountain Resort is one of the few east coast destinations that can rival the ski options out west. Indeed, serious skiers will find themselves challenged on the black-diamond runs of Mt. Mansfield, the highest peak in Vermont at 4,395 feet. Beginners benefit from top-notch instruction (Ski Magazine recently named Stowe's ski school one of the best in the Northeast) and a separate mountain on which to practice their snow-plows and turns. An annual snowfall of 333 inches per year means that newbies and experts alike have plenty of fresh powder to plow through and a recent 4.7-million-dollar investment in snow-making machines means that even the odd warm day won't ruin your ski trip.

Where to Stay: The 5-year-old Stowe Mountain Lodge gets it all right, from the ski valet who will get your gear ready for you in the morning, to the in-room fireplaces you can turn on at the push of a button. Best of all, most of the 312 rooms come with a fully equipped kitchen—a benefit for families who want to save on meals (though their Solstice Restaurant, which serves the best in local produce, is worth the splurge). 7412 Mountain Rd., Stowe, VT, stowemountainlodge.com, from $399 per night

Jiminy Peak, Massachusetts
Nestled in the heart of the Berkshires, Jiminy Peak rises 2,380 feet above the town of Hancock, Massachusetts. Experienced skiers and snowboarders come for the terrain parks, such as Coyote Ridge with its wall ride and a 30-foot flat box. Jiminy's GETSkiing series ensures that newcomers and little ones will have a good time too. Not only does the program incorporate special skis designed specifically for beginners, but they guarantee that you'll leave your lesson knowing how to stop, turn, and put on your gear—or the next lesson is on them. The mountain region also offers night skiing-a boon for folks who want to keep their adrenaline pumping long after the sun sets.

Where to Stay: Each of the 102 rooms at the Country Inn comes equipped with a king-sized bed, a living room with a queen-size sleep sofa and a fully equipped kitchenette, not to mention free WiFi. 37 Corey Rd., Hancock, MA, jiminypeak.com, from $199 per night.

Northstar-at-Tahoe, Nevada, California
The Tahoe region is synonymous with skiing. With over 3,100 acres of skiable terrain and an elevation of 8,610 feet, it's no wonder ski gurus come far and wide to try out its 92 trails and terrain parks, including a 22-foot superpipe. That said, 13 percent of the region is dedicated specifically to beginner trails and they have a lesson program that caters to adults and kids who are new to the sport. Intermediate skiers can take advantage of a complimentary tour of the mountain that will introduce them to trails and features that are best for their level.

Where to Stay: Located at the base of the mountain, the Village Lofts provide ski-in, ski-out access to Northstar's trails. Full kitchens and gas fireplaces make for a homey stay. 5001 Northstar Dr., Truckee, CA northstarattahoe.com, from $274

Breckenridge Ski Resort, Colorado
Even non-skiers have heard of Breckenridge—the historic gold-mining town in Colorado with a long, ski history. The resort has the highest chairlift in North America, which isn't surprising when you consider that the summit is 12,998 feet high. There are 155 trails spread out across the 2,358 acres of terrain, including the kinds of features that make that adrenaline junkies and skilled skiers salivate (the kinds of bowls and jumps that make less experienced skiers like myself weak in the knees). They also have one of the strongest programs in the nation for new skiers, including over 500 professional instructors and a wide range of lesson programs.

Where to Stay: Choose from a studio or a four-bedroom condominium atThe Village at Breckenridge Resort. With the exception of studios, all units come with wood-burning fireplaces and full kitchens.  It's also conveniently located at the base of the mountain and right next door to the Quicksilver Ski Rental. 535 S Park Ave., Breckenridge, CO, breckresorts.com, from $250

Deer Valley, Utah
Deer Valley has serious cred among powder junkies. It hosted multiple events at the 2002 winter Olympics, including the freestyle moguls and the alpine slalom. In addition to sublime snow, there are six mountains with dozens of trails for skiers of all aptitudes. Plus, The Deer Valley Ski School has a well-established reputation of getting novices up on skis and hitting the trails with confidence. Their policy of allowing no more than four people per group lesson means that new skiers are guaranteed the kind of attention and direction that they need to master the sport.

Where to stay: Rustic elegance is the word at The Lodges at Deer Valley, where guests can choose between traditional hotel rooms and one to three bedroom condominiums with full kitchens. The property is practically a village in itself with everything from a general store to a fitness center to a liquor store. 2250 Deer Valley Dr. S, Park City, UT, deervalley.com, from $132

Do you ski? What are your favorite resorts?