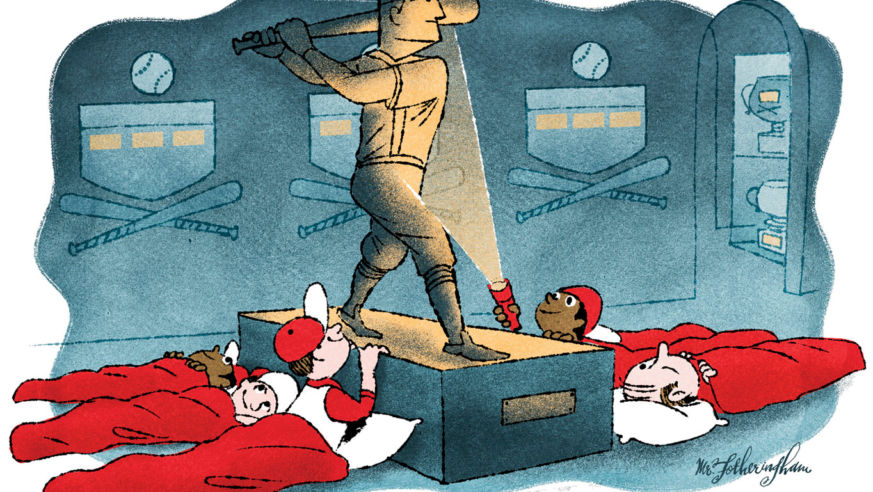 Nothing raises the bar for a family sleepover like bunking next to Babe Ruth.

As a boy in suburban Boston, Craig Nichols idolized Red Sox left-fielder Carl Yastrzemski—even choosing Yaz's No. 8 for his Little League uniform. That fandom reached new heights just after 6 a.m. one Saturday last March when Nichols, now a 51-year-old Little League coach, awoke in a sleeping bag directly beneath Yastrzemski's copper plaque in the Baseball Hall of Fame in Cooperstown, N.Y. "We were sleeping on hallowed ground," says Nichols, whose son Ryan, 10, dozed nearby. "You know that when Yaz visits Cooperstown, he stands right where I slept."

See 5 places where kids can spend the night.

Nichols, along with 37 other fathers and Little League players from Westborough, Mass., was taking part in a Hall of Fame program called Extra Innings Overnights—basically, Night at the Museum with baseball uniforms. The program, offered five times a year, began at 6:45 p.m. on Friday, when the group, which included me and my three children, laid out sleeping bags in the Plaque Gallery. For the next two hours, we had the museum to ourselves, looking at exhibits including Curt Schilling's bloody sock and Lou Gehrig's locker (a Yankee!). After snacks and a movie (Rookie of the Year), the group bedded down in the plaque room, a long, soaring space with thinly carpeted alcoves. (Key advice: If you don't bring an air mattress, you'll envy those who do.)

The trip was a bonding experience for all. The dads told stories about long-retired players; the boys sometimes roamed in packs, feeling like they owned the place—which, basically, they did. At lights-out, there was the usual horsing around, along with the 21st-century pastime of texting across the room. But at its core, the trip was a throwback to the old-fashioned pleasures of the father-son sleepover, where surviving for a night without the comforts of home—namely, Mom—lets each generation see the other in a new way. And hear each other: In the morning, the talk focused on the identity of the mysterious high-volume snorer.

Our group left the Hall around 8 a.m. so the staff could clean up and reentered after 9 a.m.—the second day's admission is included in the program's cost. Driving home, I reflected on my biggest concern: how my 12-year-old daughter had fared as the sole female in the group. But as we pulled into the driveway, she asked the question every parent wants to hear at the end of a trip: "Can we do that again next year?" That's what I call a home run.

4 More Action-Packed Overnights to Try With the Kids

Top 10 Most Shocking Mummies in the World