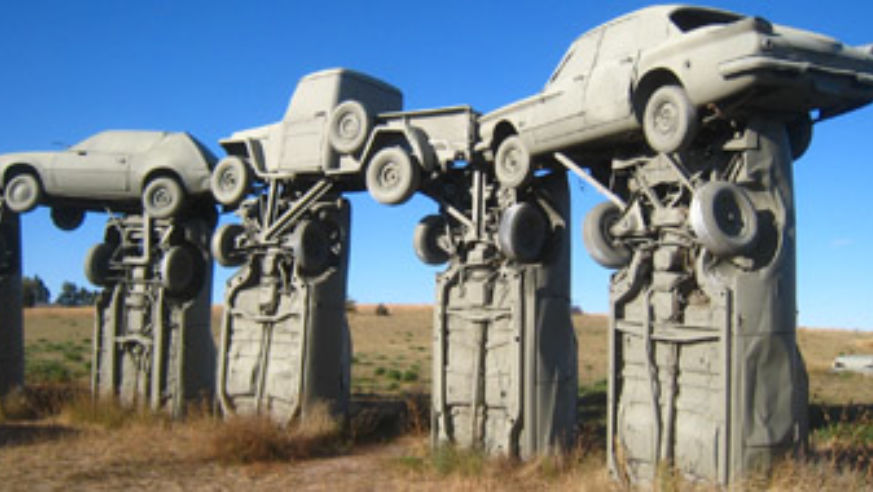 Looking to save on airfare this year, but still hoping to see world monuments? Frustrated that every time you go to see ancient temples, you’re generally directed to a big pile of broken rocks? Unsure where to find a giant ark to store your livestock? Replicas might be the thing for you.

Luckily, the U.S. is the perfect place to find historical (and not so historical) replicas to suit any need. Though not mentioned below, Las Vegas is a veritable hodgepodge of pyramids, statues, Venetian hotels and mechanical camels. For anyone looking to avoid the slot machines, the replicas below offer some unconventional alternatives.

1. Noah’s Ark on 800 acres of land in Grant County, Kentucky

Technically construction on this replica hasn’t started yet, but the ark project comes from the same ministry that managed to fund and construct the Creation Museum, an institution dedicated to proving a literal interpretation of the Bible. Despite countless jokes related to the museum’s human/dinosaur co-existence diorama (somewhere a paleontologist is crying), the New York Times reported that the Creation Museum had over a million visitors in its first three years, so it could be argued that the Ark Encounter will be one of the safest investments of the new year. If all goes according to plan, the ark will eventually be cradled in an amusement park featuring a 100-foot Tower of Babel and special effects depicting the parting of the Red Sea.

2. The Parthenon in Nashville, Tennessee

Tourists might question Nashville’s lesser known title as “The Athens of the South”, but the city has its very own Parthenon to prove it. Funnily enough, this replica is visually closer to the Parthenon of ancient Athens than the crumbling remains left on the current acropolis. The original Parthenon had many of its marble embellishments stolen (or taken for their own protection, as the British might say), and many of the surviving pieces cannot be restored to the original structure. Visitors in Nashville today can see the temple as Socrates or Plato may have seen it while discussing philosophy on the front steps. Afterwards they can stop by the rest of Nashville’s attractions—Willie Nelson & Friends Museum & General Store, the Country Music Hall of Fame and Yazoo Brewery could all be packed into the same trip.

3. Carhenge at the Car Art Reserve in Nevada

The only thing more bizarre than building a Stonehenge replica out of junked cars is having that replica come in second in America’s Top 10 Wackiest Attractions as reported by TripAdvisor (a Toilet Seat Museum in Texas took the top spot). Carhenge is made up of 38 automobiles covered in gray spray paint, assembled in a circle approximately 96 feet in diameter. Hard-core replica enthusiasts may want to consider placing a bid on the reserve—it was recently put on the market for a mere $300,000.

4. The Eiffel Tower in Paris, Texas

When first built, this Texas treasure was in competition with a wooden Eiffel Tower built in Paris, Tennessee. It surpassed its wooden counterpart by 5 feet, but later Tennessee upped the ante another 5 feet proving once and for all that not everything is bigger in Texas. Both replicas have since been put to shame by the 540-foot tall tower in Las Vegas, Nevada. Texas’s tower remains the only replica Eiffel to sport a giant red cowboy hat.

You might be thinking that all these odd monumental doppelgangers are only for Southern states or somewhere out West, but there is at least one hidden up North. Tucked in the heart of Illinois, The Leaning Tower of Niles stands at half the height of its sister city tower, The Leaning Tower of Pisa. The site is complete with four fountains and an impressive 30-foot pool. Not only is the tower more cost effective in terms of flight cost, but it’s free to climb and not swarming with tourists.