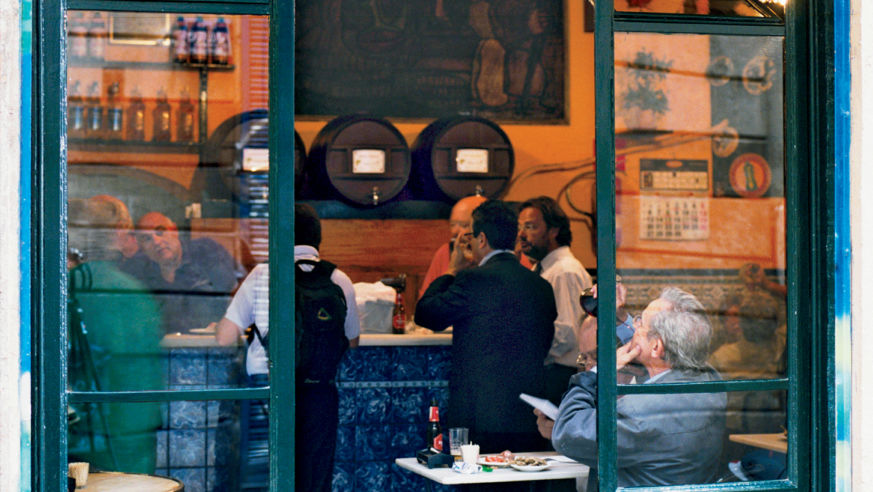 A classic afternoon at La Plata, a 65-year-old restaurant in Barri Gòtic.

We spotlight tapas bars—each in a neighborhood you’ll want to visit anyway—that are the rare local secret.

Beautiful and crazy as it is, Barcelona really is a city you can swallow in small bites. That's true in the most literal sense when you consider its loud and lively tapas bars, which range from rustic spots with sawdusty floors to clean-lined spaces starring globally trained chefs. The bars themselves offer their own tasting menu to the city. More casual than sit-down restaurants, they embody the mashed-up nature of Barcelona's culture. They're trendy yet traditional, Spanish and Catalan, guarded but gregarious. Pull up a stool in your average tapas bar and you're likely to find yourself between a punky teenager and an octogenarian in tweed. And the food: aioli-drenched fried potatoes, ultra-fresh cod, extra-large goose eggs. It's all so good, you'll find yourself thinking one thing: Where next?

With its chalkboard menu and upright barrels that serve as tables, Els Tres Porquets comes off as just one more classic tapas bar. But the black-and-white tiled space has a surprising take on standard fare; fresh mushrooms, goose eggs, tomatoes, and strawberries are on rotating display, depending on the season. The trio behind Els Tres Porquets clearly adore food—whether it's cured ham from Extremadura or the season's first peaches—and their enthusiasm is contagious. Young, dark-haired Xavi Jovells, whose parents also own a restaurant nearby in the Poblenou neighborhood, has been known to march up to customers and offer them prized bites, such as the first slices of a fragrant jamón iberico. Chef Daniel Chavez, who trained at restaurants in New York City and Paris, has a knack for putting a global spin on traditional Catalan dishes, a talent that appeals to the predominantly younger audience drawn to Els Tres Porquets, whose name means "the Three Little Pigs" in Catalan. Sure, the menu has familiar dishes like tuna belly, but instead of being preserved, Els Tres Porquets' version comes fresh and in a flavorful sauce made of honey, soy sauce, and ginger. You've never tasted anything like it. Rambla del Poblenou, 165, 011-34/93-300-8750, open Mon.-–Sat. noon to midnight. Closed Sundays.

NEIGHBORHOOD 101 This traditionally industrial, working-class neighborhood, about a 30-minute train ride from the city center, languished in obscurity until a few years ago. These days, artists are converting warehouses into lofts and galleries, and the neighborhood has begun to welcome cutting-edge musical acts. Rambla del Poblenou, the broad, pedestrian artery, has a handful of sidewalk cafés and leads directly to the beach. Get there Take Metro Line 4 (yellow line) from Plaça Catalunya to Poblenou, about 30 minutes.

A new crop of upscale tapas bars has popped up in recent years, many of them concentrated in the elegant, leafy Eixample district. Five-year-old Bar Mut, just off the bustling Avinguda Diagonal, leads the pack with an airy, brasserie-like space that's as lovely in the afternoon, when it's flooded with sunlight, as it is at midnight, when couples nudge closer together and the sous chef starts packing up for the night. A favorite among Barcelona's acclaimed chefs, Bar Mut's menu includes many small plates typical of the region, but 33-year-old chef Albert Mendiola also serves seasonal specialties. Mendiola likes to experiment with unusual combinations, like a stack of crisp potato gallettes layered with roasted artichoke puree and sea urchin. There's an exposed prep kitchen in the bar itself, but Mendiola is usually at work in the larger basement-level kitchen, directing his three-person team or adding the finishing touches to plates that are as beautifully composed as they are delicious. The lofty ceiling and wine-bottle-lined walls make a charming backdrop for crowd-pleasers such as steamed cockles with olive oil and chives, or braised oxtail with mashed potatoes. The clientele consists mostly of arty Barcelonans, but travelers have started to take note, too, which means that snagging a seat during prime hours can be tricky. Make sure to explore the impressive wine-by-the-glass list (most cost about $5), which in addition to expected Spanish whites and reds includes rarer options from Italy and France. Carrer de Pau Claris, 192, 011-34/93-217-4338, open Mon.-–Sat. 12:30 p.m. to midnight and Sun. 12:30 p.m. to 5 p.m. and 8 p.m. to midnight.

BEST DISH Montadito de foie. Foie gras and caramelized onions sit atop a crusty piece of bread. With the honey and balsamic reduction at the base, it adds up to an incredible interplay of sweet and savory flavors and an explosion of textures. $6.

NEIGHBORHOOD 101 A large swath of the city created in the late 19th century, the Eixample (ay-shomp-la), which means "expansion" in Catalan, is known for its wide, tree-lined avenues and unparalleled art nouveau architecture, including Antonio Gaudí's Sagrada Família. It's also one of the best places in the city for overall feasting, with options ranging from casual Basque tapas bars to Michelin-starred restaurants. Get there Take Metro Line 3 (green line) from Plaça Catalunya to Diagonal, about five minutes.

Of all the iconic Spanish tapas, none is more beloved than patatas bravas, or fried potato wedges. They're served at just about every restaurant in town, but bravas aficionados know that at Bar Tomás, the humble dish is elevated to the sublime. Despite the lack of ambience (fluorescent lighting, napkin-littered floor) and the unlikely residential location, you'll find the tables almost always filled with parents and kids, teenagers fresh off their mopeds, and quickly consumed plates of hot spuds swimming in garlicky aioli and fiery hot sauce. Ice-cold beer, which tempers the hot sauce, flows freely, too, contributing to the boisterous mood. Nothing much changes at 92-year-old Bar Tomás, and that includes the staff. Quique (kee-kay), a hulking waiter who's worked here for nearly 20 years, barks orders at the younger waiters behind the bar, and Antonio, the reticent, mustachioed owner, can be found collecting money at the cash register near the entrance. Antonio is tight-lipped about the recipes for the bar's famously addictive aioli and hot sauce, sharing only that he always uses small red-skinned potatoes and that they're fried in olive oil, as you might expect. Major de Sarrià, 49, 011-34/93-203-1077, open Mon., Tues., and Thurs.-Sun. 12 p.m. to 4 p.m. and 6 p.m. to 10 p.m. Closed Wednesdays.

BEST DISH Patatas bravas. Order a doble mixta, so your potatoes come doused in plenty of aioli and hot sauce, and eat them like the locals do—with a stubby toothpick. $3.

NEIGHBORHOOD 101 Tiny, cottage-like homes and bougainvillea-draped balconies characterize this picturesque neighborhood that was once its own country village. A stroll down Major de Sarrià—a winding pedestrian walkway lined with all manner of boutiques, cafés, and pastry shops—offers a glimpse into the lives of the young professionals and families that live here today. Get there Take the FGC (Ferrocarrils de la Generalitat de Catalunya) train line from Plaça Catalunya to Sarrià, about 15 minutes.

There are only four kinds of tapas at this shoe-box-size bar on the corner of a dark, narrow street, and Pepe, the squat, middle-age waiter behind the counter, doesn't really want to talk you through the choices. Still, Pepe's surliness isn't scaring anyone away. On most summer evenings, you can count on people spilling out of the open doorway. Better to come in the afternoon, when only a few old-timers will be there, arguing over soccer or politics, exactly as they've been doing since La Plata first opened 65 years ago. If you're lucky, you'll catch them drinking wine or beer from a porrón, a traditional glass pitcher shaped like an oil can. It's passed around and each person aims a stream of liquid into his mouth (without the glass touching his lips). Nostalgia rules here: An old-fashioned wooden icebox keeps beer bottles cold, wine is drawn out of dusty-looking barrels, and smoke-stained black-and-white photographs dot the walls. La Plata's owner, Anna, whose parents opened the restaurant, says the menu has hardly changed over the years. Its quartet of simple dishes—small fried fish, tomato-and-onion salad, cured anchovies, and pork sausage—are so familiar to the bar's patrons by now that you won't find a single printed menu in sight. Carrer de la Mercè, 28, 011-34/93-315-1009, open Mon.-Sat. 9 a.m. to 3:30 p.m. and 6:30 p.m. to 11 p.m. Closed Sundays.

BEST DISH Pescadito. The fish on offer (sardines, anchovies, or mackerel) varies depending on the season, but all are tossed in flour then fried briefly in olive oil for a distinctly Spanish take on seafood. If the fish is small enough, go right ahead and pop the whole thing—head, tail, and all—in your mouth. $3.50.

NEIGHBORHOOD 101 One of the most visually spectacular areas of Barcelona, the Barri Gòtic (Gothic Quarter) is a tangle of labyrinthine streets and medieval plazas; throughout, the buildings are steeped in history. The neighborhood sits above the city's first Roman settlement and some of the ruins are intact, so it's a great spot for exploring. Get there Walk from the Plaça Catalunya down the Rambla and take a left on Carrer de la Canuda, about five minutes.

It doesn't get any cozier than La Cova Fumada, a family-run, no-frills spot right off Plaça Poeta Boscà in the city's old fishermen's quarter. La Cova's worn, unmarked façade makes it easy to miss, but inside the arched doorway families and old friends swap stories around eight marble tables with just-caught fish sizzling in cast-iron pans. On most days, brothers Josep and Magi Solé take orders, fill carafes of house wine, and chat with regulars while their 74-year-old mother, Palmira, oversees the preparation of the deeply flavorful Catalan comfort food that emerges from the exposed kitchen in the corner. Because the always-packed restaurant, whose name means "the smoky cave," closes at 3:20 p.m. on the dot on weekdays (and not a minute later), it's best to arrive by noon. You'll want to order a bomba, a hefty potato croquette that comes dabbed with aioli and a house-made cayenne-pepper hot sauce. Josep will probably take your order with a cigarette hanging out of his mouth, and he'll insist that the toasty, crusted bomba was invented by his grandmother, Maria Pla, the original owner, about 65 years ago. Regardless of its provenance, you'll crave another one, but be selective in your excess—everything on offer (griddled seafood tossed with olive oil and parsley, garbanzo beans sautéed with blood sausage and pine nuts) is worthy of seconds. Carrer del Baluard, 56, 011-34/93-221-4061, open Mon.-Fri. 9 a.m. to 3:20 p.m., Thurs. and Fri. 6 p.m. to 8:20 p.m., and Sat. 9 a.m. to 1:20 p.m. Closed Sundays.

BEST DISH Bacalao. A large, perfectly cooked fillet of cod blanketed by a warm, onion-studded tomato sauce that's both sweet and smoky. Order a plate of toasted country bread to soak up any remaining sauce. $7.25.

NEIGHBORHOOD 101 Since the 18th century, Barceloneta, a casual, beachside spot right on the Mediterranean, has been home to the city's fishermen and dockworkers; today, Barcelonans come here to sprawl on the beach and eat paella along the boardwalk. Happily, this sweet little neighborhood, with its colorful laundry flapping in the breeze and old folks trudging toward the sea, still feels like a throwback to another time. Get there Take Metro Line 4 (yellow line) from Plaça Catalunya to Barceloneta, about 15 minutes.