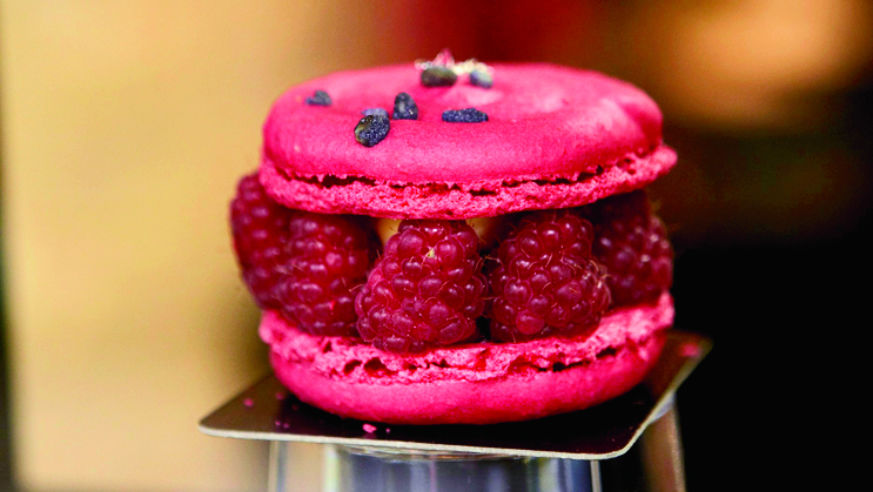 a raspberry macaron at Carl Marletti

In a city that can be explored a thousand different ways, none is sweeter than going patisserie by patisserie.

Whether your perfect day in Paris is defined by tackling flea markets or wandering through charming arrondissements, a well-positioned patisserie can add a delicious reprieve. All the better that a fresh wave of pâtissiers, trained by the masters, has opened a handful of intimate shops around town where they're remaking the monuments of French decadence—be it a Saint-Honoré, a religieuse, a Paris-Brest, or a tarte tatin. Consider them the ideal excuse for a well-timed rest.

3rd arr.
Pain de Sucre
Nathalie Robert and Didier Mathray first met in the pastry kitchen at Pierre Gagnaire's eponymous three-Michelin-starred restaurant 12 years ago. They fell in love and set off on their own to open Pain de Sucre (meaning "sugarloaf"), a simple space with a restored coffered ceiling in dessert-appropriate tones of chocolate brown and caramelized amber. Set on rue Rambuteau in the Marais, the understated storefront is just three blocks northeast from the outdoor benches overlooking Renzo Piano's iconic steel Centre Pompidou and the jungle-gym like Stravinsky fountain. In other words, it's perfect for pastries to go.

EAT IT Nathalie and Didier both have a hand in creating Pain de Sucre's confections, subtly tweaking the giants of French pastrydom like a lemon tart flavored with delicate notes of lime ($6.25).

3rd arr.
Jacques Genin
Self-taught Jacques Genin used to sell his chocolates and caramels solely to restaurants and hotels (the Ritz being one), but when he heard about a space for rent in the hip northern corner of the Marais, he decided to make his goods available to the masses. Genin's 2-year-old, loft-style shop mixes refined details—bas-relief murals, flower arrangements on the counters—with industrial elements such as metal beams and stone walls, giving the space a casual vibe. The street-level tea salon is a case study in comfort, with armchairs where you can sample pastries fresh from the kitchen upstairs. Outside, the Marais's quiet streets are populated by locals picking up loaves from their favorite boulangerie and the occasional savvy tourist, heading to the Marché des Enfants Rouges food market nearby.

EAT IT If you can't make up your mind about what to order, opt for Genin's twist on the Saint-Honoré, the traditional pastry base garnished with vanilla whipped cream and three flavors of cream puffs: chocolate, caramel, and the classic vanilla ($9.25).

5th arr.
Carl Marletti
It's unusual to see a pâtissier running the counter—unless you're talking about Carl Marletti, the owner of this shop of the same name. Every Sunday you can be sure to see him at the counter of his Latin Quarter location. Out front, tiny tables take in views of the tranquil Saint-Médard garden along with some of Paris's best people-watching. A bustling daily market transforms nearby rue Mouffetard into a shopper's delight.

EAT IT Marletti's pistachio religieuse ($5), a house favorite, is made with a vibrantly flavorful pistachio paste imported from Piedmont. He also whips up new batches of mille-feuille ($5.25), also known as a Napoleon, throughout the day, so its perfectly caramelized crunch is fresh no matter what time you drop by.

7th arr., 16th arr.
La Pâtisserie des Rêves
The name "Pastry Shop of Dreams" refers to the store's desserts, but "dreamy" could just as easily apply to the shop's team: Chef Angelo Musa—a winner of the Pastry World Cup and a Meilleur Ouvrier de France, the highest honor a French artisan can earn—partnered with legendary chef Philippe Conticini and hotelier Thierry Teyssier, the man behind the Maisons des Rêves boutique properties in Morocco and Portugal. Together they created two shops: one in the posh 7th arrondissement, one in the museum-rich 16th. The latter is a 10-minute walk from the Palais de Chaillot (which has arguably one of the city's best views of the Eiffel Tower), and it features a salon de thé and an atelier des choux, where cream puffs are assembled before your very eyes.

EAT IT A year of exhaustive edible R & D paid off with a line of classics that includes a Paris-Brest—a ring of choux pastry garnished with praline cream that reveals pockets of liquid praline ($7).

12th arr.
Blé Sucré
Fabrice Le Bourdat worked as a pastry chef in chic palace hotels like the Bristol before opening Blé Sucré ("sweet wheat") in a village-like area near the Bastille. His is a perfected version of the neighborhood pastry shop: The decor is neat but not flashy (a simple slate-gray façade and pale pink painted walls), the prices are reasonable, and his line of confections includes a wide range of flawlessly executed staples from vanilla mille-feuilles to coffee éclairs. Outside, the area hums with people heading to and from nearby Gare du Lyon, a five- minute walk south.

EAT IT The tarte tatin on a thick Breton sablé ($4.25), or butter cookie, and the baba au rhum with whipped cream ($4.75) are two particularly delicious highlights.

Check Out Our Editor-Selected Deals

Confessions of a Hotel Housekeeper