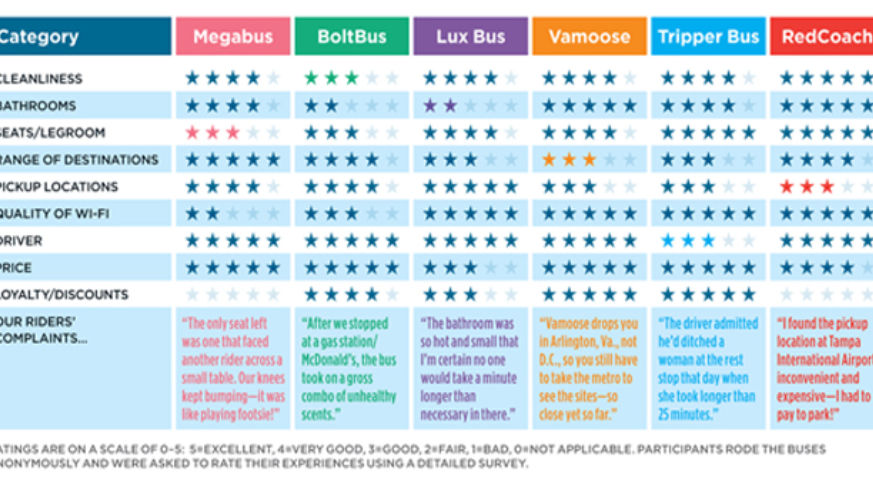 Our intrepid reporters—editors, readers, friends (and moms)—hit the road to evaluate the experiences.

They’re eco-conscious and tech-friendly. Some serve drinks. A few sell tickets for a buck. But the best reason to ride one of the new regional bus lines is as simple as two words: gas prices.

MEGABUS
Midwest & Northeast
Cities Served: 50+
Everything about Megabus is mega. The British brand's blue double-decker fleet (each emblazoned with a smiling cartoon of a driver) now serves over 50 cities in the United States and Canada, making it the biggest player on the block.
If it were an airline, it would be: United Airlines
Contact Info: 877/462-6342, us.megabus.com

BOLTBUS
Northeast
Cities Served: 8
BoltBus is operated jointly by old-school Greyhound and Peter Pan, but it's much hipper than its parents. For example, send a complaint via Twitter, and the issue will often be addressed by the techie team before you step off the bus.
If it were an airline, it would be: JetBlue Airlines
Contact Info: 877/265-8287, boltbus.com

LUX BUS AMERICA
L.A., San Diego & Vegas
Cities Served: 4
Sure, Lux Bus offers door-to-door service between Southern California hotels. But the line's bread and butter is its cushy L.A.–Vegas route: leather seats, free snacks, and free beer and wine so you can start the sin before you hit Sin City.
If it were an airline, it would be: Singapore Airlines
Contact Info: 877/610-7870, luxbusamerica.com

VAMOOSE
Northeast
Cities Served: 4
With service between New York and the D.C. metro area, Vamoose has options for any capital commuter. Senators can choose the $50-each-way Gold Bus (which has added legroom), while interns can pay with campus cash from local colleges.
If it were an airline, it would be: Delta Shuttle
Contact Info: 212/695-6766, vamoosebus.com

TRIPPER BUS
Northeast
Cities Served: 3
Tripper Bus, which runs between New York and the D.C. area, values loyalty: after buying 8 one-way trips, you'll pick up a one-way for free. In addition, each ride includes one $1, one $5, and one $10 ticket—a steal for frequent buyers.
If it were an airline, it would be: Southwest Airlines
Contact Info: 877/826-3874, tripperbus.com

REDCOACH
Georgia & Florida
Cities Served: 16
Debuting last spring, RedCoach still has that new bus smell. And with only 27 business-class leather seats per coach—each reclines to 140 degrees—you'll be relaxing in style. Consider it training for those sunny Florida beaches.
If it were an airline, it would be: Virgin America
Contact Info: 877/733-0724, redcoachusa.com

Confessions of an Oktoberfest Waiter