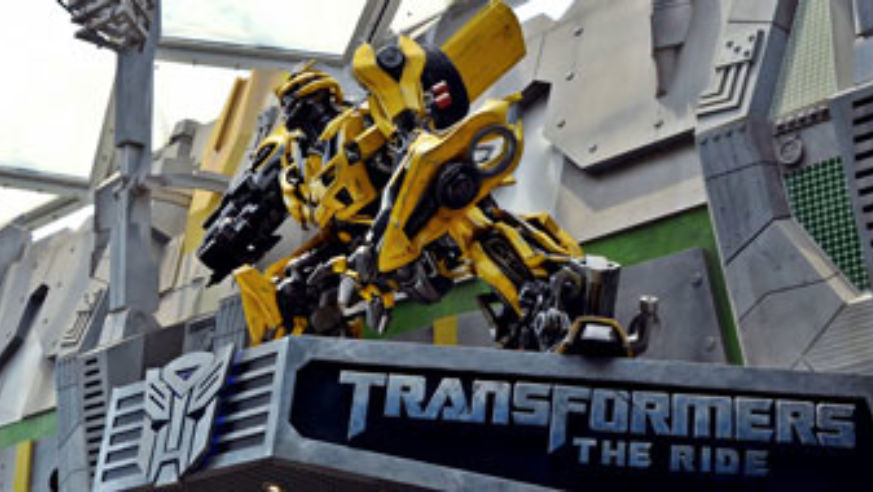 Courtesy Universal Studios Singapore, on which the California ride is based
Transformers: The Ride 3D

This summer's new theme-park attractions are throwing the average roller coaster for a loop. On Friday, Universal Studios Hollywood launches the Transformers ride, with motion-simulator vehicles inspired by the science fiction action film.

Here's are some highlights about Transformers and other new theme park attractions.

At Universal Studios in southern California, you enter the five-minute Transfomers Ride through the a cavern, then ride a vehicle past Autobots and Decepticons fighting each other on 3-D screens overlaid on robotic sets. The $100 million ride is, according to a first-person preview by the editor of Theme Park Insider, Robert Niles, "not just robots moving back and forth and side-to-side. Riding Transformers, you really get a sense of height, and the vertical scale of the figures battling each other." Its Niles's pick as the best ride in Southern California now available. One-day pass to Universal Studios: adults, $80; kids, $72.

Starting June 15 at Disneyland California Adventure in Anaheim, Calif., you enter the new ride themed on the Cars series down a Route 66 through the town of Radiator Springs. Favorite characters, such as McQueen, Mater, Sally, Finn McMissile, and Holley Shiftwell make pit stops, or guest appearances, throughout—moving and talking just like in the movies. Kids can test their driving skills on Radiator Springs Racers. adults $87, kids $81.

Hersheypark, in Hershey, Pa., has a new ride that isn't for the faint of heart: Skyrush is a roller coaster that sends you plummeting 200 feet at 75 mph and includes five zero-G airtime hills. With an 80-degree descent, it has one of the steepest dips at an amusement park in the U.S., and it's the tallest and fastest coaster in the park itself. Skyrush's unique feature is inner/outer seating, with two floored seats bookended on each wing by floorless outer seats. Expect that to become the new industry standard. Adults $57, kids $36.

SeaWorld's outpost in Orlando opened a new ride in April that will appeal to some nature lovers: a first-of-its-kind, 360-degree domed theater that lets you see in 3-D what it's like to be an endangered sea turtle. Visitors to the 7-minute show face an enormous curved screen on which projectors display a computer-generated baby sea turtle named Nyah, and the standing audience will flinch as the baby avoids underwater dangers. SeaWorld admission is adults $82, kids aged 3-9 $74.

SeaWorld's San Antonio location has this month opened a water park Aquatica with a set of educational thrill rides; expect rafts sailing through grottos with stingrays and a "zero gravity" area that simulates weightlessness. Other new attractions include Sesame Street Bay of Play (opened in 2011), a three-acre space with educational activities for young children. adults, $60; kids 3-9, $50.

A new ride themed on Angry Birds, the world's most popular popular smart phone game, opened at Särkänniemi Amusement Park in Tampere, Finland, on April 28. The 12 rides are aimed at young children. The highlight is a being pursued by one of the birds. Day pass to full park: adults, $44; kids, $35.

Which Is Your Favorite Theme Park?

Vote in the Readers' Choice Awards by May 31, under the North American Destinations category.