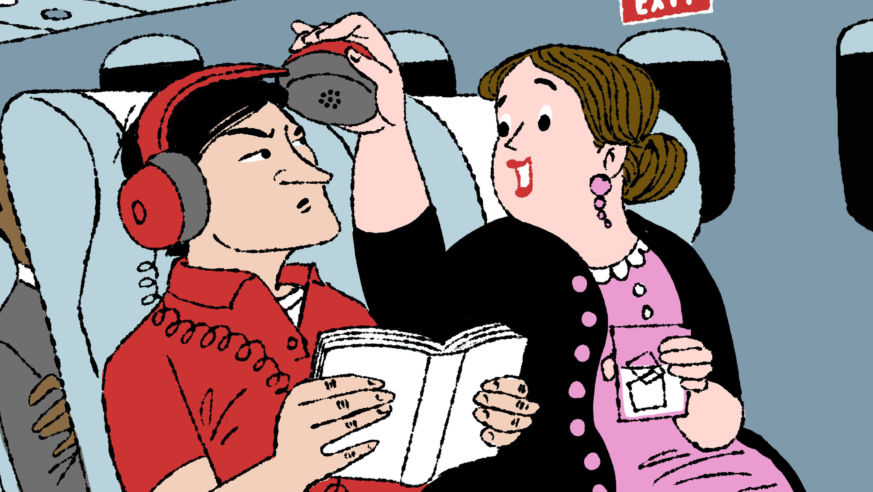 Sometimes, the worst thing your seatmate can say is—anything.

If you look forward to your transit time as a chance for R&R, a chatty seatmate can be your nemesis. Here, six cues to expertly exempt yourself from conversation—plus, what to do if you're the one who's up for small talk.

You've got a fresh copy of the new John Grisham novel, an issue of Budget Travel, and a plum spot—exit row, aisle seat—for your six-hour flight to California. Best of all, you've just shut off your cell phone and are officially out of reach. But before you can even switch on your overhead light and take a cursory glance through the SkyMall catalog, you hear the dreaded question: "So do you live in San Francisco? Or just visiting?"
For many travelers, a chatty-Cathy seatmate is the kiss of death. So what are some subtle, effective ways to fend off conversation when you want to commute in peace? We asked body-language expert Joe Navarro—former FBI agent and author of Louder Than Words and What Every Body Is Saying—for some surefire tips.

Looking someone in the eye is a great way to foster communication, bonding—even flirting. And that's exactly why you should steer clear of it if you want to be left alone. "As soon as you make eye contact, it's like a license to make conversation," Navarro says. But, he continues, "I do a lot of traveling, and I'll tell you, there are a lot of people who just don't get it."
Why is it so hard for someone to take a hint? "People seek the comfort and company of others when they're anxious," explains Maureen Erber, a social psychology professor at Northeastern Illinois University. "So one reason people may insist upon connecting with their seatmates, in spite of signals to the contrary, may be anxiety." Plus, Navarro adds, "There are those who talk just because it's the social thing to do."

2. Turn Slightly Away From the Person

"I have a saying about this: 'Belly away, don't want you to stay,'" Navarro says. "It's actually called ventral (versus dorsal) denial. You rotate so [your seatmate] sees more of your shoulder."
Practically turning your back on someone should work with most seatmates, Navarro notes, since it's a trick that's elementary: "Children at a very young age learn to turn their belly away when they don't want to engage."

3. Have an Object That You're Focusing on

Make it clear that your attentions are elsewhere, Navarro suggests—whether it's a book or a smartphone or listening to music on your headphones. "Or do some writing," he says. Still, he's quick to warn, "You'll still have people who will try to engage."
"While we think that a behavior such as reading a book clearly sends a sign to others, it might not be immediately perceived that way," notes Greg Willard, a social psychologist and research associate at Harvard University's department of psychology. It's helpful in these situations, he says, to try to understand that the person is most likely not being rude—just a bit thickheaded.

4. Close Your Eyes and Lean Back

If all other nonverbal cues are failing, Navarro says, "Just close your eyes and lean back, as if you're trying to get some rest." And, hey, maybe you'll actually drift off while you're at it. The bottom line with Navarro's suggestions, he says, is this: Are your nonverbal cues being read in the way you want them to be?
"People do not always notice the things that we think they've noticed," Willard points out.

5. Answer a "Hello" With a Polite Smile Only

You can respond to a direct greeting, Navarro says, but not with a "hello" or in any other verbal way. In fact, he advises, you shouldn't even nod, which is an invitation to engage. Just flash a polite (not toothy) grin, and then immediately get back to something—anything—that keeps your attention away from the seatmate.
However, Willard adds, "When it comes to the distinction between rejection and ostracism (being ignored completely), research finds that ostracism can hurt in even more profound ways." To really make yourself understood, he suggests, "it is best to [tell someone directly] if you do not want to talk."

If your previous signals fail and your seatmate insists on talking, just be sure to give very curt, short answers. Navarro says, "That indicates: 'I don't want to get involved in conversation.'"
"People generally do not deal well with ambiguity," Willard continues, so instead, be direct and explain that you need to stop talking because, for example, you have to get some reading done. Usually, Willard says, "Any reason whatsoever will do."

What If You WANT to Engage in Conversation?

For every person who doesn't want to chat up a fellow flier, there is someone who does. "Once I sat next to an archaeologist, and we had the most fascinating conversation," gushed one Budget Travel reader. Another said: "It's my favorite part of traveling. We share this world, why not enjoy it together?" Rather than dive right in—for the reasons we've mentioned above—it's best to give signals that you are open to communicating and then look for positive responses, Navarro suggests.
"The best way to engage is to say "hello" and arch your eyebrows or flash your eyes, which communicates, subconsciously, that you are genuinely interested, or that you care," he says. "Even babies recognize this." Tilting your head to the side, he adds, also conveys your interest. And then? Simply follow up with the surefire, "So do you live in San Francisco? Or just visiting?"