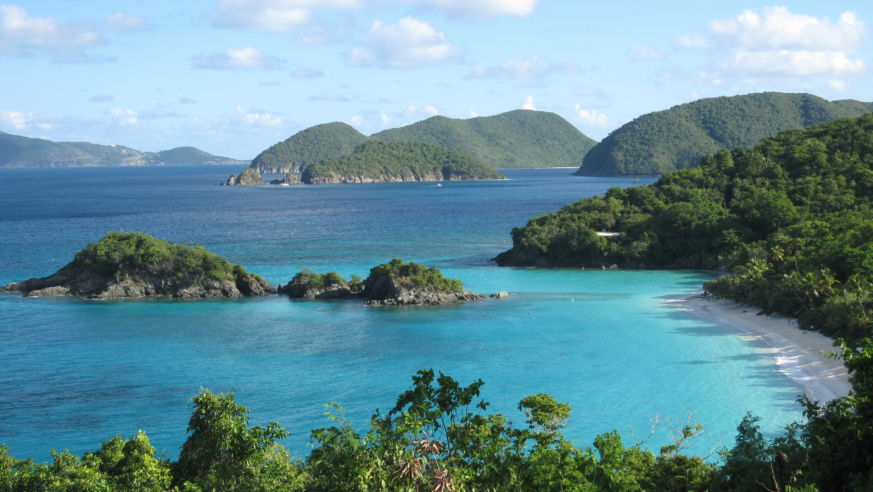 A full 9,500 acres of the island St. John (also known by the nickname "Love City") is protected U.S. national parkland—it even has an underwater preserve you can snorkel.

A nearby tropical paradise, no passport required? Point us to the closest airport and we'll be on our way. If your passport has expired and you need a quickie getaway now, the U.S. Virgin Islands (USVI for short) has all the trappings of an exotic island jaunt, minus the red tape.

1. You don't need a passport to enter the USVI.

Located just to the right of Puerto Rico, the U.S. Virgin Islands have been a United States territory since 1917, so U.S. citizens don't need a passport to get in. With that little inconvenience out of the way, if you're feeling spontaneous and want to maximize your beach time, you can even hop a direct flight to the St. Thomas airport from U.S. cities including Atlanta, Boston, New York, Miami, and Fort Lauderdale. Spirit Airlines often offers short, less-than-three-hour direct flights Fort Lauderdale for less than $300. Bonus: Once you arrive, currency is the U.S. dollar, and there are ATMs on the islands.

2. Fifty islands make up the USVI—but St. Thomas, St. John, and St. Croix are the three most prominent ones.

Discovered by Christopher Columbus himself in 1493, these three islands have unique identities. Remember them like this:

• Cultural St. Croix is known for its historic towns (Christiansted and Frederiksted in particular), shops, and pastel buildings. TRY: Touring the 18th-century slave quarters, sugar factory, and windmill of the 12-acre Estate Whim Museum, the only sugar plantation museum in the Virgin Islands ($10, stcroixlandmarks.com).

• Natural St. John is almost all protected U.S. national park: Two-thirds of it is verdant hills and underwater reserve, plus the striking beaches of Trunk Bay, Cinnamon Bay, and Maho Bay. TRY: Packing a lunch and setting out on the guided three-mile downhill Reef Bay Hike through tropical forests, past sugar mill ruins, and alongside ancient petroglyphs. The $30 fee covers the hike, transportation to the trail head, and a boat ride back to the Visitors Center (nps.gov).

• Cosmopolitan St. Thomas, on the other hand, is known for its shopping and dining. TRY: Lounging on the well-maintained white sands of Magens Bay, which is staffed with Red Cross-certified lifeguards and snack and drink bars, and has been called one of the world's most beautiful beaches ($4).

The 225-yard-long underwater snorkeling trail in St. John's Trunk Bay even has underwater signs to guide you among the coral and sea creatures. Bring the kids—it's an easy swim, and you can rent snorkel gear once you're there (nps.gov).

4. You can casually board a seaplane to island-hop.

Sure, a ferry is always an option, but why not summon a seaplane shuttle as your chariot when you're exploring the USVI? Travel the 44 miles between St. Thomas and St. Croix in about 25 minutes on an airline like Seaborne Airlines or Cape Air, which have multiple daily flights (from $60 one way).

Mark your calendar if you like parties, food, and fanciful costumes: St. Croix's Christmas festival is in December (naturally), St. Thomas holds its carnival the last week in April, and St. John celebrates June through early July. You'll be "limin'" (hanging out) with the locals in no time.

6. They drive on the left side of the road there...in American cars.

Yep, you can rent a car in the USVI just like you can everywhere else (from familiar companies like Hertz, Avis, Thrifty, Budget, etc., to boot), but remember to channel your inner James Bond and motor like a Brit—even though the steering wheel is counterintuitively on the left side too. (Awkward.)