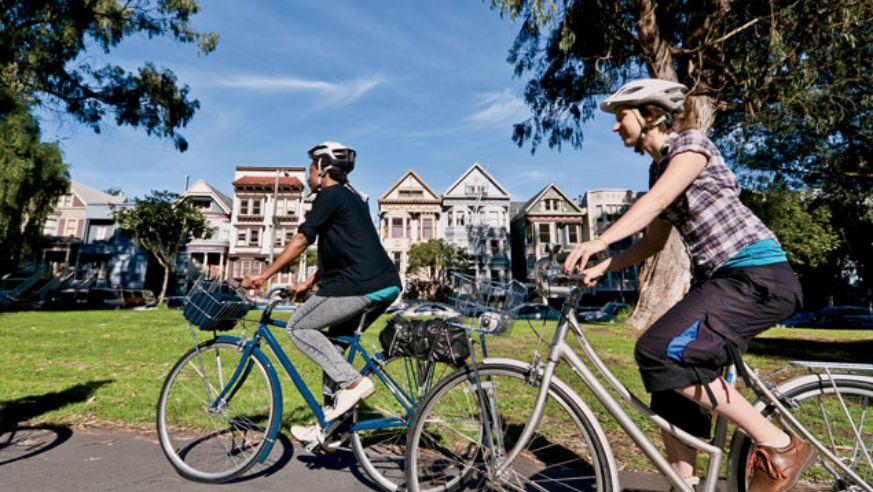 Ride around San Francisco, one of many culinary bike tours around the country

The French aren’t the only ones who can pair a meal with a pair of wheels. A fresh crop of culinary bike tours is leading American city slickers to restaurants that are well worth the trip.

The pace on this three-hour tour is Southern-drawl slow, so don’t count on burning off most of those deep-fried calories. And you’ll consume quite a few along the way at places such as Price’s Chicken Coop, celebrated for its fried bird, and Mert’s, where the house specialty is the “soul roll,” filled with collard greens, black-eyed peas, and chicken. You’ll also sample a few morsels of local history: As you wind through bustling Uptown (home to the NASCAR Hall of Fame) and the post-industrial South End, your guide will run through the Queen City’s history, from its early days as a Native American trading center to its modern incarnation as the South’s banking hub.

Know Before You Go: Gratuities aren’t included in the tour price, so be sure to bring along extra cash to tip your guide and servers. Tours depart from 401 E. Martin Luther King Jr. Blvd., Wednesday through Sunday year-round, $55 (includes bike and helmet).

Don’t be daunted by the city’s famously sloping streets: This six- to eight-mile tour avoids heart-pumping hills in favor of a mellow ride on urban-friendly, ergonomic bikes. Stops aren’t fixed, but you’ll likely cruise to the Mission District for killer Mexican at hole-in-the-wall Vallarta taqueria and Hayes Valley for artisanal coffee at Ritual Roasters. One local favorite is a bit of a moving target: Roaming mobile food market Off the Grid takes its ever-changing roster of food trucks to a different Bay Area location each day of the week.

Know Before You Go: Have your camera ready—tours often pass architectural landmarks (City Hall), as well as pop-culture ones (Twitter’s headquarters). Tours depart from Fulton and Pierce Streets, on the north side of Alamo Square, dates available year-round, $95 (includes food, bike, and helmet).

This leisurely, 10-mile jaunt departs from the touristy French Quarter, but the point of this tour by Confederacy of Cruisers is to highlight how locals live. To that end, bikers spend up to four-and-a-half hours steering their Schwinns through traditionally Creole areas, like Tremé and Faubourg Marigny. Stops vary depending on the day—and the seafood in season—but you can expect staples like gumbo and po’boys. Bonus: Mid-ride, sole tour leader Cassady Cooper shares lessons on music and antebellum architecture.

Know Before You Go: Pork and shellfish are always plats du jour. If you have dietary restrictions, consider one of the company’s other tours, like the History of Drinking in New Orleans Bike Tour. Tours depart from 634 Elysian Fields Ave., Wednesday through Saturday year-round, $85 (includes bike, helmet, water bottle, and tips for the servers).

Fork and the Road

It all started when two food-loving pals began rounding up their friends for bike tours of Chicago gelaterias and taco joints. Now in their fourth year, Fork and the Road’s 12- to 18-mile tours are centered on quirky themes, such as global bakeries (Vietnamese, French, and Middle Eastern) or the Silk Road, with stops at Chinese, Afghani, and Turkish restaurants.

Know Before You Go: Bikes and helmets aren’t included in the tour—or the tour’s fee—so BYO or prepare to rent. The ride starts and ends near Bike and Roll stations, where you can rent wheels for as low as $10 per hour, or $20 for an all-day rental through chicago.bcycle.com. Tours depart from Intelligentsia Coffee (53 E. Randolph St.) or Kitchen Sink Café (1107 W. Berwyn Ave.), check site for dates, $50–$65.

Know Before You Go: If you supply your own wheels, Pedal Bike Tours will knock $10 off the tour price. Tours depart from 133 SW 2nd Ave., Tuesday through Saturday year-round, $69 (includes bike and helmet).

Launched this March in conjunction with the annual Cherry Blossom Festival, International Bites by Bike will run throughout 2012. Itineraries aren’t set yet, but rides during blossom season played to the D.C. power-lunch set, with stops at sit-down restaurants instead of food trucks, in areas like Dupont Circle and U Street. A typical outing let riders sample one dish at three spots: Southern-themed Eatonville, Asian-tinged Scion, and swanky bistro 1905.

Know Before You Go: Although you’ll be in bike lanes, if you’re not comfortable with the idea of cars whizzing by, this tour may not be ideal for you. Tours depart from the Old Post Office Pavilion, 1100 Pennsylvania Ave. NW, check site for dates, $89 (includes bike, helmet, and food).

Andy Potter guessed that most visitors to the city never make it to the hip but less-developed East Side. So he and his wife debuted the East Austin Bike Tour, a roughly six-mile, four-hour trek that shows off the area’s ethnic restaurants and funky retro food trailers. A recent agenda included snacks from Argentina (Buenos Aires Café), Japan (Love Balls Bus), and West Africa (Cazamance trailer).

Know Before You Go: The tour typically stops at a brewery, where riders are free to imbibe (the fee includes two alcohol samples). Helmets aren’t mandatory for adults here, but ask for one, especially if you’re boozing. Departure points vary by tour, Fridays year-round, $69 (includes food, bike, helmet, and drinks).—Nicole Frehsee

10 Restaurants that Started a Food Movement

6 Ways to Keep Your Stomach Safe Anywhere on Earth