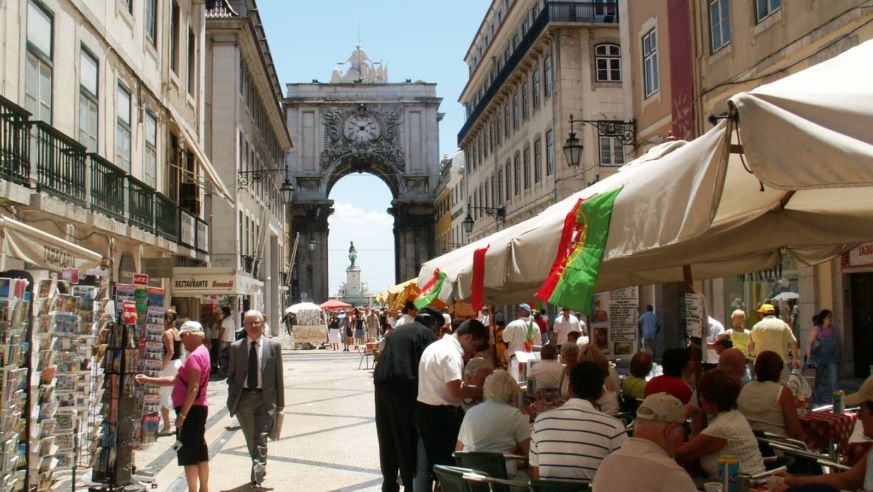 Weigh the cost of booking a room where you want to be versus staying too far from the city center to save a buck.

It's easy to get wrapped up in doing all the touristy things and forget to seek out more interesting and off-the-beaten-path cultural experiences, like concerts, street festivals, and native dishes. Having been to more than 50 countries so far, I've developed seven rules that I think can help make traveling more enjoyable and rewarding, even if you're on a very tight budget.

Sleep where you want to be
Once, I traveled to Lisbon for the weekend (something you can do when you already live in Europe, lucky me!). When I booked the flight, there was an offer for a luxury hotel for a relatively cheap price, so I booked it. Bad move. Sure, the hotel was upscale and beautiful, but it was also in the business district, which means that the area was totally dead on the weekend and miles away from the historic town. In terms of enjoying the city, any single-star hotel right downtown would have been much better. The lesson? You want to sleep comfortably, of course, but beyond that, sleeping is sleeping. It's much more important to be close to what you came for.

Smile, mime, and try to say a few words
Sometimes people get very nervous about traveling to countries where they don't speak the language. Once, I traveled from Mexico to Venezuela knowing maybe 50 words of Spanish total (though I did pick up a few more by the end of the trip). Even with my low level of Spanish, it wasn't all that hard to get around. In many places we traveled to, English was scarce, but people appreciated that we tried to use the local language. Apart from that, miming and smiling usually works wonders, so don't be afraid to look a little silly. When I am confronted with somebody with whom I don't share any language, I usually talk to them in Dutch (my native language). Slowly and with lots of hand movements, I can usually get my point across. (If all else fails, check out the phrasebooks in our Triposo mobile app!)

Learn when to listen—and when to ignore—local advice
I was in Namibia and wanted to cross to Zimbabwe through the Caprivi Strip. The bus was canceled, and the local travel agent said there were no more buses for the rest of the night. We asked what our chances for hitchhiking looked like, and they told us to ask the men who worked at the gas station down the street. As it turned out, they had their own (mini) bus system with continuous departures to Zimbabwe. We had an excellent trip and got to see a completely different side of Namibia. The lesson? The locals are, of course, a great source of first-hand information when traveling. However, they have their own prejudices and perspectives, so while their input is important, it's not the end of the discussion. If you don't like the answer you get from one person, go ask another! Sometimes you need to talk to a few different people before you get the whole story.

Know when to trade time for money
Another time, I booked a trip with some friends on a boat traveling from Java to Sumatra. Once aboard, I discovered that my tickets placed us in third class. That meant an overcrowded iron compartment 10 meters below sea level. On top of that, the trip would apparently take 72 hours. My friends and I considered the situation for ten minutes, then grabbed our bags and bolted for the airport. That night, while sitting on our porch overlooking a tropical river, sipping a cold beer with orangutans howling in the background, we thought about how we would still be traveling for another 60 hours had we taken the boat... Yikes! Travel in third world countries can be very cheap, and that's great. It means you can see and do things you might not be able to do elsewhere. But sometimes you have to snap out of the cheapskate mindset and realize that you can buy a lot of time with a little more money and that is often 100 percent worth it.

Readjust your appetite for risk
Getting around in Kenya's matatu buses are undoubtedly much more dangerous than the subway in Berlin or New York. In fact, it's safe to say that the matatus would be outlawed as death-traps in many places around the world. So why would you take them when visiting Kenya? Well, if you use the same risk calculations when traveling as you do at home, you won't be able to go very far, and your visit probably won't be worthwhile. In my mind, since you're only taking these risks for a limited amount of time, it's fine. Higher risks for a limited amount of time in return for extraordinary experiences is a good trade-off in my opinion.

Check the weather report
While in Morocco, I decided to take an excursion to the sand dunes of the Sahara. It hadn't rained there in ten years. Guess what? That day, it poured! While it's true that most places travelers visit have more stable weather than Europe or the U.S., nothing is ever certain. Most places are nicer with sun and if you leave your schedule open, you can always hop on a plane or a train to where the sun is shining. Use your smartphone to check the weather and don't be  afraid to be spontaneous if it will result in a better trip.

Don't go cheap on food all of the time
If you're traveling on a budget, meals are often a great place to save some dough. Years ago, I was traveling with my brother (and now business partner) in Syria on a tight budget. Falafel three times a day is indeed a cheap way to fill your stomach, but it gets old fast. Only much later did I discover that I had missed out on the best parts of Syrian cuisine by being too cheap to eat in a nice restaurant. So my advice is to always take one night and splurge on the best food you can find. The memories will be well worth it, and your taste buds will thank you.