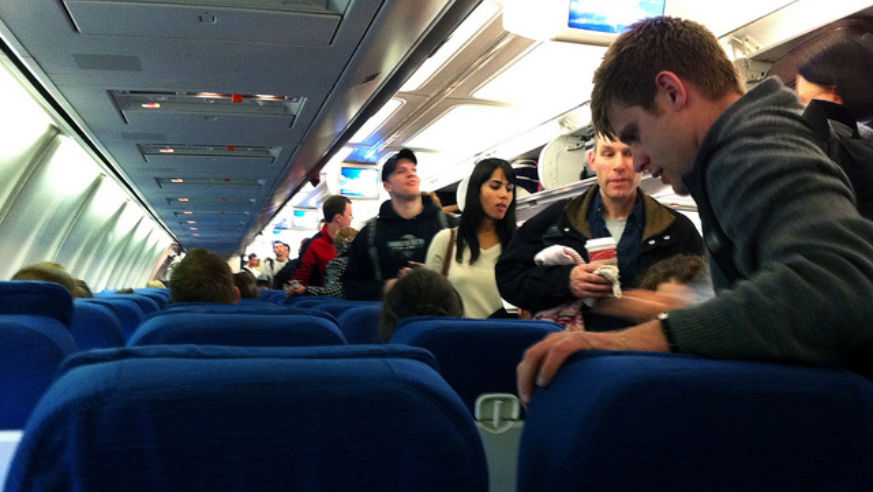 A lot of you felt changing the boarding process would make flying easier.

What is the one thing you wish airlines would do to make flying better? We recently posed this question to our audience on Facebook and Twitter, and you certainly had a lot to say. We had a hunch the airlines were driving you crazy, but were stunned to see how much. Based on your answers, here are seven things airlines should do to make flying easier for everyone.

Improve customer service
Many of you complained about grumpy flight attendants, unfriendly representatives at the gate, and a lack of communication between airline staff and passengers when delays occured. Laurie Fundukian put it quite simply, "Communicate with passengers and don't lie to us about delays." Another traveler, Tracey Phillips said that airlines should return to the days where flying was a special experience. "Airlines used to be more concerned with making their customers happy and comfortable instead of simply getting as many bodies shoved in as cheaply as possible," she said, adding that a great customer service experience would lead to more customers. Mary Ingersoll Dirksen told about her recent ordeal while flying from Kentucky to Oregon on United Airlines, an experience that involved flight bumping and little-to-no communication about delays, which resulted in missed connections and having to pay for a hotel because the delay was not the airline's fault. Another traveler, Jennifer Ansbach, put it more bluntly: "Treat us like people."

Add more leg room and wider seats
This category got the biggest amount of responses—whether you're tall or short, everyone could use a little more leg room. For some of you, it goes beyond that: Judy Dion LaMance said, "Stop treating passengers like cattle. Give us a human sized seat with room to exit the row without everyone getting up." Traveler Amy Bacharach voiced another common seating complaint. "Definitely get rid of reclining seats unless they add at least six more inches of space. Reclining on today's flights is rude and inconsiderate." Some of you even compared airline seating to that of Amtrak, noting that if their seats could be wider, the airlines should be able to provide the same level of comfort. In the words of Kim Hale, "Wider seats with more leg room. I dare to dream."

Get rid of baggage fees
A lot of you were absolutely adamant about baggage fees. Some said to choose one fee, either for checked bags or carry-on pieces, while others used profanity to express their aggravation with being charged to carry luggage at all. Susan Flagg offered a compromise, "I would suggest no fees for one checked bag and fees for carry-on bags. It would expedite loading and unloading passengers, while at the same time eliminating the hassles of someone trying to cram an oversized bag into the overhead bin." Kimberly Sparks simply said, "Eliminate or lower baggage fees...Southwest has figured it out."

Improve the boarding process
You also thought the boarding process could use an overhaul. Gini Johnson said airlines should simplify things by always boarding from the back of the plane first. "It is more efficient than waiting as people put their luggage overhead." She also says airlines should let people with tight flight connections get off the plane first. Jill Masse Stokes said the "zone" boarding only leads to more crowds at the gate and complicates things when bags no longer fit in the overhead compartment by the time you board—she added that eliminating baggage fees would lead to less carry-on bags, and that would solve the overhead bin dilemma. Another traveler, Andrea Dillon, said a seat-by-seat boarding process may help (as in window seats, then aisle seats), since waiting for people in aisle seats to unbuckle and move around to let in the window seaters also takes time and leads to longer lines.

Bring back food—and make it better
Some of you insisted on bringing back hot meals and a wider variety of free food options while onboard. Marie Rodgers said, "Make sure you have enough food for everyone. Also, have something nutritious. There has to be something better than chips and candy, especially when you run our of everything else." (Until then, we recommend bringing along your favorite snacks.)

Enforce carry-on rules
A few of you mentioned how irritating carry-on rules can be in terms of bag sizes and where to put them onboard, but even more so when you're the only person following them. Erin Cramer said, "Try to maintain some order with where passengers put their carry-on luggage. The last few flights I've been on, passengers in the back have had their carry-ons in overhead bins in the front and vice versa. It causes headaches for everyone." Denise Marasco, said, "You should only be allowed to put your carry-on in the overhead bin above your own seat. Not wherever you feel like it. It would make boarding and unloading so much faster."

Start kid-free flights
Another major trend was complaints about babies crying on the plane and how kid-free flights would be preferable. (After a three hour flight from Rome to Dublin this summer in front of a six-year-old with kicking abilities that rival David Beckham, I'm starting to become a fan of this.) One traveler complained about babies being allowed into first class, saying that people don't pay that kind of money to have a screaming child behind them. Others advocated family friendly flights, while Mary Michaels suggested that airlines, "Charge a little more for the ticket prices for an adults-only flight. This would be especially beneficial for adults on those long overseas flights where all you want to do is catch some shut eye."

Do you agree with these demands? Sound off in the comments below!