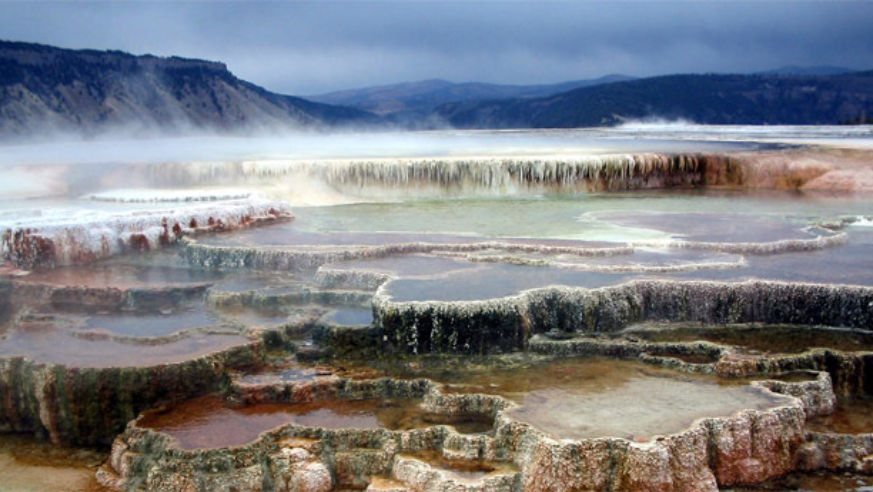 No offense to the nation's capital, but the landmarks of our heritage extend far beyond the District of Columbia.

Sears Tower (Willis Tower)
It's fitting that the country's tallest building, the Sears Tower (we haven't come to terms with the new name either), is in the same city that built the first skyscraper, the Home Insurance Building, demolished in 1931. Chicago's innovation sparked a worldwide race that continues to redefine city skylines from London to Dubai to Taipei. There's simply no better way to experience those early architects' remarkable vision than to stand on The Ledge at Skydeck Chicago, a transparent observation box that suspends you 1,353 feet above street level, on a wisp of glass just one and a half inches thick.

Gettysburg
The site of the Civil War's bloodiest battle and of one of Abraham Lincoln's most famous speeches, Gettysburg National Military Park is a lasting memorial to the devastation caused by, and the reasons for, the war that remade the union. In its successful efforts to fend off encroaching development, Gettysburg also reflects the struggles of many historic sites to preserve the sanctity of their land. nps.gov/gett.

Yellowstone
Yes, other National Parks are stunning (Grand Canyon and Yosemite come to mind), but Yellowstone, signed into being by President Ulysses S. Grant in 1872, was the very first in the world—and established an early precedent for land conservationists internationally. This majestic park, bordered by Wyoming, Montana, and Idaho, preserves an enormous natural bounty: It is home to 10,000 hot springs and 300 geysers, numerous lakes and rivers, and wildlife such as bighorn sheep, bison, grizzly bears, and more than 1,000 gray wolves. nps.gov/yell.

New York Harbor
It's still easy to imagine the bay as millions of immigrants might have perceived it on their way to the United States: the promise of the Statue of Liberty, the judgment of Ellis Island, and the hope of Manhattan's skyscrapers rising in the distance. Emma Lazarus's ode to the huddled masses, inside the Statue of Liberty's pedestal, is a timeless reminder of our common bond as immigrants, a history that stretches from Jamestown to the current day.

Monticello
Why Thomas Jefferson and not George Washington, you ask? It's undeniable that Washington was the greater warrior, but it was Jefferson who authored the Declaration of Independence and helped define our claim to liberty—the reason we fought in the first place. Monticello, filled with more than 5,000 of his prized artifacts, like botanic microscopes, an illustrated engraving of the Declaration of Independence, and elk antlers from the Lewis and Clark Expedition (which Jefferson sponsored), is a fascinating exhibition of the progressive, transformative ideas of its owner. monticello.org.

Graceland
Born in Mississippi and raised in Memphis, Elvis Presley incorporated the homegrown sounds of the Delta blues and country music into his songs, and then shared them with the rest of the world. Graceland, his home, is a similar melting pot of styles and tastes. Like his music, it's American through and through. Among the highlights: two private jets named Lisa Marie and Hound Dog II, five gold-plated showerheads, and in the car museum across the street, 10 of the King's favorite rides, including his famous pink Cadillac. elvis.com/graceland.

Pearl Harbor
The bombing of Pearl Harbor transformed a sleepy, remote naval base into a fiery catalyst for America's entry into World War II. Within the space of a few hours, the U.S. Pacific naval fleet was devastated, more than 2,300 servicemen died, and the nation united around a common cause. It's hard to imagine a more poignant memorial than the Alfred Preis-designed bridge that hovers over the midsection of the sunken battleship, the USS Arizona, which remains the underwater grave for 1,177 of her crewmen. nps.gov/valr.

Historic Ebenezer Baptist Church
The struggle for racial equality has taken place all over the country, but for Martin Luther King Jr., it began in Atlanta at the church where he was baptized, delivered his first sermon, and served as co-pastor with his father until his death in 1968. His soaring speeches clarified the goals of the civil rights movement and extended the country's promise of freedom; his example of nonviolence remains an astounding contribution to the country's history of dissent.

Note: The parish has grown into a larger building across the street (where visitors can attend services); the historic church is now part of a National Historic Site that includes his birth home and grave. The church is closed until the end of 2009 for restoration. nps.gov/malu, historicebenezer.org.

WHAT, NO GRAND CANYON?

In trying to come up with a list of places every American must see, we knew we'd raise some hackles. We considered options like the Grand Canyon, Mount Rushmore, Ground Zero, Philadelphia's Independence Hall, the Trail of Tears, the Inside Passage, and the Golden Gate Bridge, among others—before publishing our final list.

We suspect you'll have something to say on the subject. So we invite you to sound off below: Feel feel to agree, to disagree, or to nominate and defend your own iconic American spot. And if you have photos or videos, all the better. Upload them through myBudgetTravel, and tag them "iconic America."