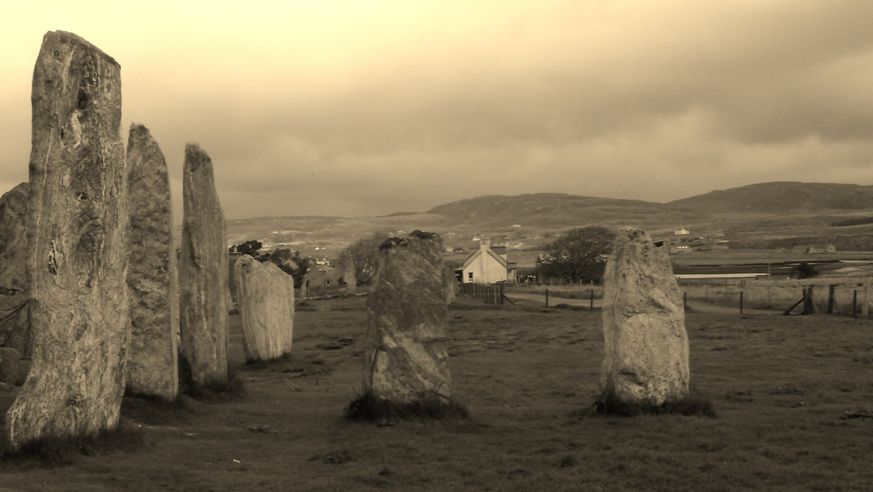 Callandish Stones, in the Outer Hebrides, are a romantic reminder of Scotland's ancient past.

You've probably heard of Stonehenge on Salisbury Plain, and the White Cliffs of Dover are certainly no secret. But have you ever been to Thor's Cave, the Brimham Rocks or Speedwell Cavern? Here we list just eight of the UK's unusual but unsung sites; each an awesome masterpiece courtesy of Mother Nature. So next time you're enjoying a vacation in our fair isles, you can visit natural landmarks without the excessive crowds.

Situated in the heart of the Derbyshire Dales, you'll find spectacular Speedwell Cavern. A large underground vault that you navigate by boat, its limestone depths house superb stalactites and stalagmites. If you have the time, why not visit its neighboring cave? Although it's named after a rather rude British word for the Devil's rear end, it's an impressive sight nonetheless!

Loughareema Lake has got to be one of Northern Ireland's strangest sights; if you can see it, that is. Also known as the "Vanishing Lake," its bed near Ballycastle is made of leaky chalk, so when peat isn't plugging its bottom, the waters drain rapidly underground. You'd have no clue it was there if it weren't for the local sign: Even engineers were fooled into building a road right through it!

There are many standing stones on the Isle of Lewis, but the collection at Callanish (or Calanais, in Gaelic) is the best known of them all. Monolithic rocks dating back at far as 3,000 B.C., they're a romantic reminder of Scotland's ancient past. Admire the three sets of stone circles as they rise proud against a Hebridean sunset: The pink and russet hues are an experience not to be missed.

Thor's Cave is a large natural cavern, nestled in the Manifold Valley of Staffordshire. Its entrance, an impressive arch about 30 feet high and 24 feet wide, is located more than 200 feet above the ground in a steep, limestone cliff, offering panoramic views of the valley. At its ancient heart, remains of extinct animals, jewellery, and pottery shards have been found dating back to the Stone Age.

Abergwyngregyn might sound like a mouthful, but this sleepy village in Wales is just a few miles from Aber Falls. Known as Rhaeadr Fawr Falls in Welsh, the 100-plus-foot-high torrent spills out over a rocky sill, situated along the picturesque coastal trail, the North Wales Path. With Bronze Age settlements and plenty of picnic benches in the area, it's long been a popular spot for a sunny afternoon.

A bizarre collection of rock formations on the Brimham Moor, North Yorkshire, this superb series of landmarks boasts an enviable location. Situated in some 50 acres of the Nidderdale Area of Outstanding Natural Beauty, you'll find towering rocks with names like the Watchdog, the Dancing Bear, the Sphinx and the Turtle. Try viewing them from all angles to guess the name before you hear it!

Fingal's Cave is trickier to reach than the other natural landmarks on this list, but if you can make the boat trip to the Isle of Staffa, you won't regret it. Part of the Inner Hebrides, Staffa is an uninhabited and entirely volcanic island, home to a number of strange sea caves. The structure of Fingal's Cave, however, is unique: Formed solely from hexagonally joined basalt columns, the cathedral-like cavern inspired composer Felix Mendelssohn's "Hebrides Overture."

A gargantuan man carved into the slopes of Windover Hill, East Sussex, the Long Man of Wilmington's been around for a very long time! No one knows exactly when he first came about, or why the unusual drawing is there, but that's all part of this enormous chalk figure's allure. Measuring in at around 200 feet tall (he's the tallest in the United Kingdom), the enigmatic gentleman holds a stave in each hand.