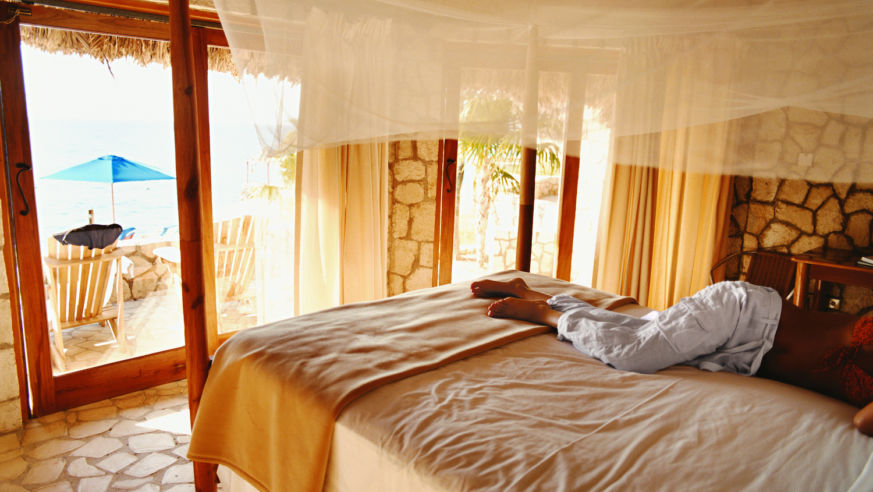 Each year, Budget Travel scouts out undiscovered hotels in popular destinations, from Italy to California wine country. Here, we pull the best of our picks from around the world, all for less than $210 a night.

Rockhouse Hotel, Jamaica
Seclusion isn't easy to come by in the party town of Negril, with its sprawling resorts and thumping dance beats, but that's exactly what Rockhouse delivers, primarily to hip couples and families hoping to avoid anything close to a spring break experience. Rockhouse's rounded, thatch-roof villas are strung atop a low cliff carved with stairs that lead down to the warm waters of Pristine Cove. The 20 villas peeking out of the jungle right at the cliff's edge start at $220 a night, but the long buildings set a bit farther back are easier to pull off—five studios with sea views ($150) and nine standard rooms with garden views ($125), all with minibars, safes, A/C, and mosquito netting around four-poster beds. Guests chill out at the 60-foot horizon pool, take yoga classes, or stroll along the property's serpentine paths and stepping stones, which inevitably lead to quiet nooks, isolated beach chairs, and what most people say are the best sunset views in Jamaica. The action on Seven Mile Beach—including the nightlife hub of Jimmy Buffett's Margaritaville, live reggae on the sand at Alfred's (Tuesday, Friday, and Sunday), and Roots Bamboo (varies)—is a quick $5 to $10 cab ride away. Closer to your cabana—right next door, actually—is Pushcarts at Pirates Cave, where patrons eat curried goat before jumping off the cliff and swimming into the sea cave underneath. 876/957-4373, rockhousehotel.com, from $125.

Albergo California, Positano, Italy
Maria Cinque makes a point of chatting with every one of her guests, if not at check-in (which her son Gianni sometimes handles), then at breakfast the next morning. She's particularly delighted to meet Americans, as she and her husband Antonio lived in the Bronx for nine years, returning to Italy in 1974 to run a family hotel five minutes' walk from the center of Positano—and to teach their children "what it means to be Italian," in Maria's words. Six of the 15 guestrooms are in the original Palazzo Bruno, dating from 1777, including four upstairs rooms with 18th-century ceiling frescoes. Many regulars prefer the ground-floor rooms 51 to 55 because they open directly onto the magnificent, long entrance terrace and enjoy postcard views of Positano framed by ivy trailing off the shady trellis. Rooms without sea views (they actually look out to a wall) cost $65 less—an option certainly worth considering, since all guests have access to the terrace. Each of the California's rooms is spacious, and seems even more so due to minimal furnishings. At sunset, small groups gather on the terrace to sip wine, plan the next day, and pinch themselves, realizing that they've got the same view as the chichi Le Sirenuse hotel down the street for one-third the price. 011-39/089-875-382, hotelcaliforniapositano.it, from $200, breakfast included, closed mid-November to mid-March.

Fundana Villas, Corfu, Ionian Islands, Greece
If there's any doubt whether Spyros Spathas values his heritage, just look at the reception area of his Fundana Villas, where a more than 200-year-old stone olive press serves as a reminder of the Spathas family's six generations of local history. It's been 29 years since Spathas converted his farm's stables and outbuildings into 12 guest bungalows, but the accommodations have been updated with flat-screen TVs and modern kitchenettes. And the views from the rooms are as glorious as ever: No. 10 has two wrought-iron balconies that look out on the Ropa Valley, and No. 12 takes in the green slopes of Mount Pantokrator to the northeast. A guide for the Greek National Tourism Organization for more than 35 years, Spathas maintains a half-mile hiking path to the 18th-century Monastery of St. Onoufrios, open every other Sunday, and leads weekly botanical walks through the area. His 26-year-old son, Foivos, just opened a traditional Corfiote restaurant on the grounds, serving dishes such as veal with garlic sauce and pan-fried artichokes from Fundana's gardens. If you feel inspired to venture off-property for dinner, stop in at Elisavet's Taverna in the nearby village of Doukades. There, the grandmotherly proprietress sits in front of her establishment encouraging visitors to try the kokoros pastitsada—rooster over macaroni—a local specialty she's been making for 20 years. 011-30/26630-22532, fundanavillas.com, from $67, breakfast $9.

Landmark Vineyards, California Wine Country
For people who harbor fantasies of running away and starting their own winery, Landmark has the answer: two guest rooms right in the middle of a working vineyard, where, from your front door, you can watch the grapes growing and being harvested. Seeking an escape from the rapidly suburbanizing town of Windsor (20 miles north), Landmark's founder, Damaris Deere Ford, relocated the winery in 1989 to a spectacular piece of property at the base of Sugarloaf Ridge in Kenwood. She also brought in her son Michael Colhoun and daughter-in-law Mary as partners, making it a real family business. Ford is the great-great-granddaughter of John Deere, and the John Deere company's signature forest green pops up throughout the property, whether on a pair of rocking chairs or on an antique 1946 tractor near the front gate. The white-shuttered, stand-alone Cottage sleeps up to four and is ideal for families—it has a bedroom, a foldout couch in the living room, a washing machine and dryer, a small front porch, and a spacious, fully equipped kitchen. The smaller Suite has two twin beds (which can be pushed together), a fireplace, and a private patio with views of Sugarloaf Ridge and Hood Mountain. Both rooms are a stone's throw from the bocce court and California mission-style tasting room, so guests can sip freely, knowing it's a quick stumble home through the vines. 707/833-0053, landmarkwine.com, from $170.

Les Deux Frères, Roquebrune-Cap-Martin, French Riviera
Go up—past the crowds, past the noise—to the tiny cliff-top village of Roquebrune-Cap-Martin. Stop to gasp at the panorama from the tiny town square, and notice the lovely dining terrace to your right. It's attached to the restaurant of the intimate Les Deux Frères, in a 19th-century stone building that was once a school. A mahogany bar fills the lobby; a narrow staircase leads up to the 10 small, pretty rooms. Each has a name indicating its theme: Provençal, Africain, Marine, and so on. Views range from lovely to stupendous; depending on your room's orientation, you might look out on the town square, the rugged hills, or (if you get the full frontal) the cliffs, the sea, and, in the distance, Monaco. 011-33/4-93-28-99-00, lesdeuxfreres.com, from $100, closed late November to early December.

Amor de Mar, Montezuma, Costa Rica
An Adirondack-style lodge houses Amor de Mar's 11 rooms, paneled in dark wood and decorated sparely, so as not to distract from the views (best from the second-floor porch). Two rooms share a bath, but the others are private. A patio restaurant serves breakfast and lunch, emphasizing simple fare like tropical smoothies and homemade breads. The wide front lawn gently slopes toward a rocky point, where there's a tide pool big enough to swim in. It's a five-minute walk to the nearest sandy beach, and thrill seekers will be happy to know that Amor de Mar is close to the famed Montezuma Waterfall Canopy Tour, a zip line that whizzes through treetops and down over waterfalls ($50 for two hours). 011-506/2642-0262, amordemar.com, from $70.

Posada Que Onda, Akumal, Riviera Maya, Mexico
Even though it's now thickly settled, Akumal, Mayan for "Place of the Turtle," still has room for turtles, which return each spring to lay eggs in nests along the very beaches where they were hatched. It's the oldest resort town in this part of Mexico, a former coconut plantation with an extraordinary coastline that was rediscovered by a diving club in 1958. Akumal has maintained the easygoing style that first attracted those divers to its waters. It has also been popular with families because its shallow, sandy bays could have been designed with kids in mind. The same could be said of the Posada Que Onda: Half of the hotel's pool, for instance, has a built-in shelf where kids can play. (Adults use it, too, sitting in water from the waist down under the blazing sun.) Posada Que Onda is not on a beach—the closest, Half Moon Bay, is a 10-minute walk away—but it's only 50 yards from excellent swimming in Yalku lagoon. Guests can borrow the hotel's snorkel equipment and bikes at no charge. Large rooms have cool, white-tiled floors and are adorned with local art and artifacts. Especially spacious is a bi-level suite with two terraces; the upper terrace provides a view of the lagoon and the Caribbean. Kids love the restaurant, too, because it features homemade pastas. 011-52/984-875-9102, queondaakumal.com, from $60.

Mount Haven Hotel, Penzance, Cornwall, U.K.
Orange Trevillion was drawn to Penzance, at the end of Cornwall, because of the town's proximity to St. Michael's Mount, an ancient craggy island that looks a lot like a lopsided volcano. "It's a sacred place," says Trevillion, an eccentric with carrot-colored hair (of course) who believes that four of the Earth's energy lines come together here. Formerly the site of a Benedictine priory and rumored to have once been home to a giant, the island got its name when a fisherman claimed to have seen the Archangel Michael there many years ago. Trevillion and her partners bought Mount Haven in 2001. They knocked down walls and reconfigured the old coach house to maximize views of St. Michael's Mount and the ocean. Most of the 18 rooms look out on the water. They have a distinctly Asian feel, with silk bedspreads and throw pillows covered in embroidered fabrics from Trevillion's frequent trips to India. (Room 6 is the quietest, away from both the front desk and the terrace.) Even the restaurant, where many dishes are flavored with curry and lemongrass, has views of the Mount. But the best seats are on the terrace: You can see the island rising steeply out of the water, a medieval castle on its tippy-top. (Owned by the National Trust, the castle is open to the public.) At low tide, when people stroll across a granite causeway to visit, it appears as if they're walking on water. Beyond Mounts Bay and Penzance, the city made famous by Gilbert and Sullivanm is Land's End. 011-44/173-671-0249, mounthaven.co.uk, from $206, includes breakfast.

Tenuta di Roccadia, Carlentini, Sicily, Italy
In 1988, Pietro Vacirca gave up the family clothing business to buy an abandoned 19th-century farm built on the site of a thousand-year-old Cistercian convent. "Finding Roccadia was like finding a beautiful woman," Pietro says. "So I got married—for the second time. First my wife, then Roccadia." Five years later, Pietro opened Tenuta di Roccadia as an agriturismo with horseback riding and hiking trails. Arranged in long buildings draped in flowering vines, the 20 guest rooms are large, with sturdy wooden furnishings and wrought-iron bed frames; six of the rooms feature lofted sleeping areas built of rough timbers. A patio looks over citrus groves in a valley to the snowcapped peak of Mount Etna beyond. Roccadia's olive and citrus groves, almond trees, and sheep provide most of the ingredients for the preserves, liqueurs, honeys, cheeses, and whatever else smells so good in the kitchen. Four-course dinners (starting at $28) begin promptly at 8 P.M. in the dining room, where old farm implements hang under a high wood ceiling, or on the terrace in summer. 011-39/095-990-362, roccadia.com, from $98, including breakfast.

Vote for the Coolest Small Towns in America