Last week, Travelocity released its 2011 Traveler Confidence Report, a survey in which 1,400 Americans were asked about their vacation plans for the coming year. And the results are surprisingly positive! It turns out that, in spite of all the negative travel-related news we hear every day—from riots in Egypt to rising baggage fees to invasive TSA checks—Americans are still excited about getting out there and exploring the world. It seems 2011 will be a good year for travelers and the travel industry alike.

Here are the numbers: 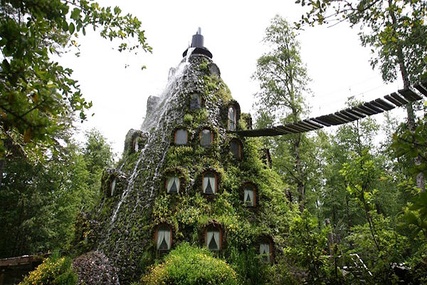 4 reasons we have Chile on the brain

We were excited to learn yesterday that Chile plans to invest $4 billion to renew its airline fleet between 2011 and 2013. Even before this news, however, we've had Chile on the brain in a big way. In putting together our November issue a few months back, I came away with a new entry for my own personal Travel Bucket List: a week of stargazing, pisco sours, and midnight horseback rides at the Elqui Domos astro lodge, near Chile's Atacama Desert. But the country has several other new attractions to add to its appeal: This month the downright surreal 150,000-acre Huilo-Huilo Biological Reserve is adding yet another weird hotel to its roster. The Andean rainforest reserve, 530 miles south of Santiago, already has one hotel shaped like a baobab tree (aptly named the Baobab Hotel) and a 13-room Magic Mountain Lodge, a conical, plant-covered cross between a gnome's hat and a hobbit-hole (pictured). Somehow, they're topping even those architectural marvels with their upcoming 19-room addition, A World Fungi, which will take the form of a giant mushroom. Considering that starting rates for the existing properties bust our budgets a bit, we'd opt to stay in one of the reserve's ten Canopy Village treehouse cabins, with five-person accommodations from about $83 per night, and just wander around the wackier buildings like a confused tourist, while taking advantage of all the other attractions on site&mdash;from hiking trails and hot springs to fly-fishing excursions and minigolf. (Huilo-Huilo Biological Reserve, cabins $83, huilohuilo.com) In April 2010, the Transatacama railway made its maiden voyage, carrying passengers through a day-long exploration of some of the most scenic&mdash;or, at least, most historic&mdash;sections of the Atacama Desert, one of the world's driest expanses. The 62-mile round trip includes two meals, an on-board musical performance, and stops at the Precolumbian Cerros Pintados geoglyphs, with over 300 individual large-scale rock drawings; the colorful village of La Tirana, home to one of Chile's most vibrant religious festivals, Fiesta de la Tirana; and of course, a handful of abandoned mines and spooky, preserved mining towns. The train departs Saturday mornings from the coastal city of Iquique, and returns around 7pm. (Ferrocarríl Transatacama, classic tour $168, transatacama.com) A significantly less dusty experience awaits at the new (and exceedingly charming) Palafito1326 Boutique Hotel, opened in October 2009 in the village of Castro, on the Chiloé archipelago 726 miles south of Santiago. The 12-room property takes its architectural cues from the 19th-century houses of the Gamboa neighborhood in which it was built&mdash;propped up on timber stilts along the water's edge, using salvaged larch shingles for the exterior and native wood for the floors of the guest rooms. The overall vibe is upscale rustic: Think modern fixtures, a neutral palette, fluffy textiles woven from local wool, and large windows, many of which overlook the Gamboa River and Castro's fjord. Elevated walkways connect the rooms with large terraces and a light-filled communal living and dining room. (Palafito 1326, doubles from $92, palafito1326.cl) Have you been to Chile? If so, tell us your favorite places in the country! More from Budget Travel: 25 Breathtaking Winter Scenes Vote now in our Readers' Choice Poll Top Budget Destinations for 2011

It's been one of the stormiest winters in recent memory&mdash;and we're not through yet. To beat the winter blues, we went in search of your most blissful, stunning photos of the season, from a sunrise over snowy Lake Tahoe to a fairy-tale castle in Germany. And whatever you do, don't miss irresistibly sweet photo #4 of a polar bear keeping her cubs warm. See all 25 reader photos in our slide show. RECENT READER SLIDE SHOWS Coastlines | Funny Travel Signs | Wildlife NOW IN SEARCH OF... We're collecting your photos of cherry blossoms. Upload them through myBudgetTravel, tag them, and check back in the coming weeks for a slide show of the best submissions.

Which movie best represents your hometown?

Throughout the month of February, the Museum of Fine Arts Boston will play home to a film series called "Cinema and the City." The screenings will celebrate movies that are closely linked with the cities&mdash;all in the Americas&mdash;in which they are set: Vertigo in San Francisco, Do the Right Thing in New York, Chinatown in Los Angeles, City of God in Rio de Janeiro, Los Olvidados in Mexico City, All the President's Men in Washington, and The Friends of Eddie Coyle in Boston. Fittingly, the screenings will take place in the museum's brand new Art of the Americas wing. The $504 million, 121,307 square-foot project, which opened in late November 2010, is comprised of 53 galleries of art from North, Central, and South America. The film lineup got me thinking. Sure, destinations like New York and Los Angeles are widely represented on camera, but what about smaller towns and unsung cities? I grew up in Tampa, a place which has served as a backdrop to many films over the years. But two stick out for me that represent my hometown well: Edward Scissorhands and the upcoming Anna in the Tropics. Tim Burton's 1990 fantasy was filmed around the Tampa Bay area. Although the city is never mentioned by name, the movie captures perfectly the manicured lawns and pastel cookie-cutter homes of Tampa's suburban sprawl. On the other end of the spectrum is a movie that is still in the development stages: the upcoming feature film adaptation of the 2003 Pulitzer Prize winner for best drama, Nilo Cruz's Anna in the Tropics. Set in Tampa's historic Ybor City neighborhood, the play tells the tale of a lector who reads classic novels (like Leo Tolstoy's Anna Karenina) to workers in a Cuban-American cigar factory in 1929. Poetic and romantic, it's a piece of literature that has hopefully stirred a few travelers to come check out Tampa as a tourist destination. I hope the just-announced film adaptation does the same. Which movie best represents your hometown? If a film has never been set where you live, which movie best captures the spirit of your town or state? See more from Budget Travel: Top 10 Beaches From the Movies Does a Disaster Movie Turn You On (Or Off) to a Destination?

One of Budget Travel's top tips for taking sharper vacation photos is to shoot during the "golden hour," around sunrise and sunset&mdash;when the wash of light that bathes scenery in a soft glow. But when you travel to a new location, you may not know the times for dawn and dusk. One tool to look up peak photography times is Golden Hour. This free app launched in October and is available via iTunes. If you prefer, you can find the same information on any laptop or mobile device with a Web connection at golden-hour.com. In addition to the golden hour, you may want to know when the "blue hour" is so-called because the sun hasn't yet come up but the sky is lightening up to a pleasant shade of blue, and already spectacular landscapes appear even more so. In this case, you'll want to fire up the free Twilight Calculator. And if you're choosing in advance from a couple of different vantage points for shooting, you may prefer SunCalc, a new site that overlays information about the Golden Hour with a view of the sun's trajectory, so that you can see what direction as well as what hour you should shoot from. TIP: You should also invest in a heavy, sturdy tripod for the low-light conditions. Feel free to share your own tips about travel photography in the comments. MORE FROM BUDGET TRAVEL My Take: A half-dozen reader photos we've showcased in Budget Travel magazine 25 travel-inspiring photos from readers Readers' best sign photos