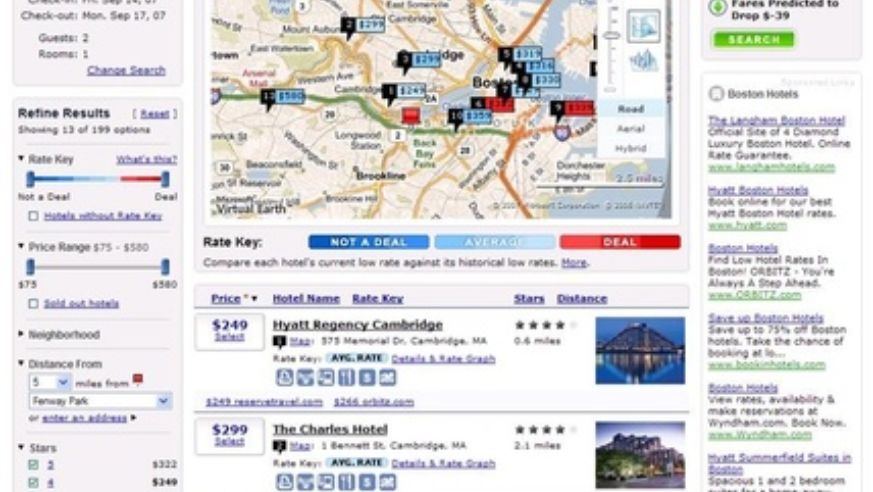 The airfare prediction website Farecast is taking on hotels, offering rate advice for major properties in 30 U.S. cities. Rather than predict rates, the site tells you if the rate at any given hotel is a good value when compared with the hotel's rate history and other factors.

You plug in your dates and preferred neighborhoods to stay at your destination, and then you add your wish list of preferred amenities. The site maps hotels that meet your criteria, along with the lowest rates available and advice on whether to book one or keep looking. As explained to us by Farecast CEO Hugh Crean: If a hotel rate is highlighted in red, it means that the rate is a relatively good deal when compared with the hotel's past history, local demand, and other factors.

The buying tip, called a Rate Key, tells you if a hotel's rate is unusually low given its past pricing history and other factors, such as the demand for rooms in the city on particular dates.

Farecast crunches the numbers on hotel rate data that it receives from Orbitz and other sources. The site doesn't sell hotel rooms but sends you to these sources for booking.

Currently, the buying tips for hotel rates are only available for 5,000 hotels in 30 U.S. cities. Also, Farecast does not collect rates directly from major hotel chains, which often guarantee the lowest rates by booking on their websites.

Farecast has made its name as a website that predicts whether fares on a route will rise or fall within the next week. In July, Farecast had more than 500,000 users, according to the Boston Globe. It's the first company to bring data-mining techniques to hotel rates, giving it a head start on its competition.