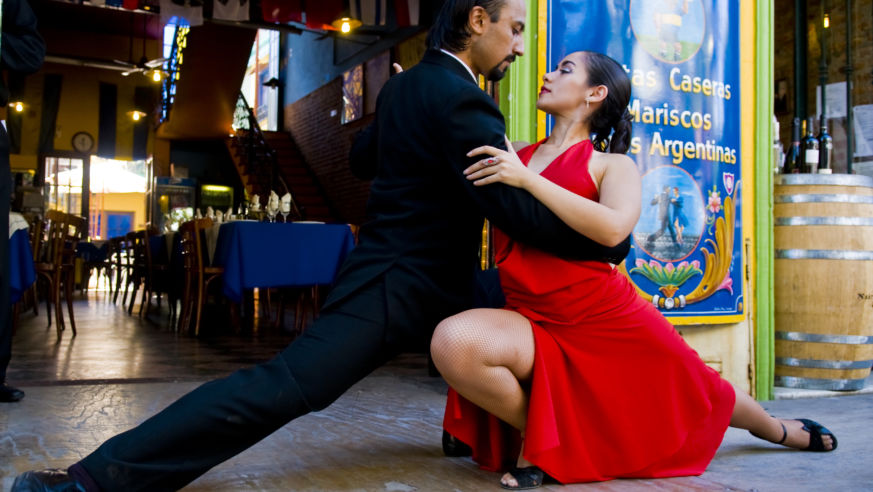 Buenos Aires isn't Europe, but the architecture, museums, street life, and plentiful cafes and late night restaurants make it feel like a big city in Spain or Italy. Most city residents, called porteños, trace their origins just a few generations back to Europe, mostly Italy and Spain but also Russia and Eastern Europe.

The city's gorgeous architecture is an eclectic mix, though to view much of it you'll have to walk on gritty streets and ignore the graffiti. A highlight is Teatro Colón, the lushly decorated Beaux-Arts performance hall that is home to the opera, orchestra, and ballet. The guided tour in English is worth the 130 pesos (discounts for seniors & students), and you might be lucky enough to glimpse performers rehearsing. A better way to appreciate its great acoustics is to book tickets to a performance in advance of your visit—unless you are willing to try standing room.

Recoleta Cemetery is a must-see. The Cemetery is like a tiny city built for munchkins, with sculpture-covered mausoleums 20 feet high and grouped closely together along narrow paved walkways. Admission is free. Fifteen pesos gets you a map to the 4800 tombs of the elite, and also to the cemetery's biggest draw, the grave of Eva Peron, the Argentinian First Lady from 1946 until her death in 1952. To learn more about Evita's decidedly non-elite background, visit the Evita Museum (admission fee), housed in a mansion Evita converted into a temporary shelter for rural women migrating to the city. The museum features photographs from her early career as an actress and magazine pinup, newsreel of her good works, and a sampling of her gowns. Eva Peron still has a hold on Argentine people. Her image is used in ads for current political figures, appears on restaurant facades, in public art, and in graffiti.

Visit the Latin American art museum, MALBA, to see a Frida Kahlo self-portrait, be introduced to other Latin American painters and sculptors, and enjoy the light and air of its soaring modern interior and glass-walled cafe. (Admission 45 pesos, discounts for students & seniors, half-price Wednesdays.) The decorative arts museum, housed in the luxurious former palace of a family that lost its fortune in the 1930's, also has a lovely café with indoor and outdoor seating. A quirky museum is Zanjon, an urban archeological site, with guided tours in English for 120 pesos.  Zanjon is a gutted 19th century mansion that, after the yellow fever outbreak of the 1870's, served as an overcrowded tenement shared by immigrant families. Its cisterns, artifacts, and underground tunnel give a glimpse into three centuries of urban life. By contrast, the Immigration Museum is a missed opportunity, a single room that barely skims the surface of the immigration story that has shaped Argentina, and has no English explanations.

One legacy of Buenos Aires' Italian roots is its delight in ice cream. It is such an integral part of Buenos Aires life that ice cream shops often stay open after midnight and on major holidays such as Christmas or New Years Day and - incredibly—many will even deliver to your door. Dulce de leche is not just a rich caramel flavor but its own food group. It crops up in morning pastries, as a topping for coffee, in desserts, and most memorably in ice cream. Expect to see at least five varieties of dulce de leche ice cream on the menu. Good ice cream chains include Freddo and Persicco. Better yet, try one of the artisanal heladerías that make small batches, such as Faricci, also with multiple locations. Cadare is a hole in the wall that may make the best ice cream in the world. Try the bittersweet chocolate (chocolate amargo), samboyón (like eggnog), chocolate chip (chocolate granizado), and of course dulce de leche.

Reflecting their Spanish roots, Buenos Aires eats dinner late: 10 p.m., 11 p.m., even midnight. While restaurants open at 7, few locals arrive before 9 and you may have better luck getting a table at 7:30 or 8.

A visit to Buenos Aires must include grilled beef. Steakhouses, called parillas, are plentiful. While the highly recommended parillas Don Julio and La Cabrera were booked during our visit, we lucked into thoroughly delicious steaks at a nearby restaurant that did not specialize in beef, LeLe de Troy. If you go to the parilloChiquilin, which was good but not great, skip dessert and walk a few blocks for outstanding ice cream at Cadare (see above). Wash all that steak down with Malbec, an Argentinian red wine. Every grocery store, even tiny ones, have a wine aisle, about $5 a bottle.

Buenos Aires is a great walking city in part because there are plenty of welcoming spots to rest. You are never more than a block from the next café. An espresso or café con leche comes with a gracious extra—a tiny cookie or bite of corn bread.

And the many parks are rejuvenating nature breaks. The tranquil Japanese Garden is especially lovely, with koi ponds, tiny bridges, benches studding the walking path, and landscaped grounds that somehow muffle noise from the street. Admission fee of 40 pesos; the ice cream kiosk and elegant tea house are extra. There is no admission fee for the slightly down-at-the heels Botanical Garden, which features outdoor sculptures, a green house, flowering shrubs, and shade trees, plus park benches and imperious stray cats lounging in the sun. Also free is wandering the ParqueTres de Febrero, shaded by trees and used by picnickers, joggers, and families. Kids may enjoy the many small playgrounds that dot the Ricoleta and Palermo neighborhoods.

Different neighborhoods (barrios) have distinct personalities. For cafes, restaurants, and boutiques, both glamorous and funky, visit the tree-lined streets of the Palermo barrios—Palermo Hollywood, Palermo Soho, Palermo Viejo, and Palermo Chico. Lining the streets of Recoleta are upscale apartment buildings built in lush early 20thcentury styles. The Once neighborhood is home to observant Jews and has kosher restaurants, like the family-friendly Romini Pizzeria which serves up thick crusted pizza with gobs of gooey cheese, and Kehot, which sells Judaica. Chine is a miniature Chinatown, with Asian grocery stores, tea houses, sushi, and other restaurants born out of recent waves of immigration. The subway (subte), at less than a dollar per trip, is a quick way to jump between neighborhoods.

At first we resisted going to a tango show because it seemed too touristy. But ultimately I was glad we did see one, and glad we waited until we had some cultural context for Argentina's sexy signature dance—like that tango originated in the immigrant slums of Buenos Aires and became "respectable" in Argentina only after Parisians embraced it in the early 20th century. The Esquina Carlos Gardel, an elegant 500-person theater, showcases pairs of professional tango dancers. It also serves dinner. This splurge can be more affordable if you skip dinner and buy tickets only to the show, then ask for a discount for paying in dollars rather than pesos.

Bring U.S. dollars. You may get discounts if you pay in dollars instead of pesos and the black market exchange rate is much higher than the official rate.

Since Buenos Aires is in the southern hemisphere, the seasons are the opposite of the U.S. Our winter is their summer. January-February is the equivalent of July-August and temperatures can reach 90-100's.

Porteños love their dogs. And the sidewalks, littered with dog poop, are proof. Watch your step.

Sarah Ricks is a Clinical Professor at Rutgers Law School-Camden and a lifelong travel junkie.