Readers pack in nominees for overrated destinations A follow-up from the LAT's own list of places, which included Paris. [Los Angeles Times]

Dollar goes a long way on winter trip to Iceland Fun fact: "sales of horse meat—cheaper than beef—have been rising with the bad economy. [Yahoo]

Glastonbury hippies claim local Wi-Fi network is damaging their "ley lines" Is it the Wi-Fi, or just an excess of Facebook? [Gadling]

One town that won't let you down Finding a good time in Chicago. [Chicago Tribune] 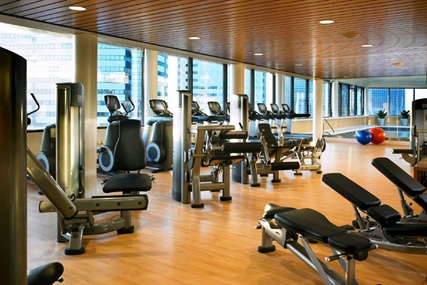 Sheraton makes it easier to stay fit while traveling

Sheraton has launched a health program at four U.S. hotels, with plans to expand it to their 406 properties worldwide throughout 2009. It's the most impressive fitness-for-travelers program we've seen at any major hotel chain. Collaborating with professional sports training company Core Performance, Sheraton Fitness has installed pristine new gyms with treadmills, ellipticals, and weight machines at hotels in San Francisco, Phoenix, Seattle, and Woodbury, Minn. Each fitness center displays illustrated instructions for travel-specific workouts&mdash;ranging from the 30-minute Jet Lag Buster (which guides you through balances with balls and stretches with rope) to the 60-minute Road Warrior (which tacks on free weights and cardio)&mdash;so you can make the most of the equipment. If you prefer more privacy, you can order a bag containing a workout mat, foam rolls, stretch rope, and massage stick to your room at no charge. Don't know how to use them? The bag also includes workout cards. Plus, guests can check out free 30-minute video routines on in-room TVs. The program also extends to food. On-site restaurants will now serve healthy options, such as a scrambled egg white and turkey wrap and a portobello burger, which can all be delivered right to your door. Crashing with the family? Anyone can download four complimentary 20 or 30–minute workouts designed to fit into your travel schedule at sheratonfitness.com. Here are starting rates right now for the first hotels to provide this innovation: Sheraton Phoenix Downtown $219 Sheraton Seattle (1400 6th Avenue) $179 Sheraton Fisherman’s Wharf $159 Sheraton St. Paul Woodbury $139

How rock bands save on lodging

More than 900 bands belong to Couchsurfing.com, a network of travelers looking to crash for free on strangers' sofas. Half of those musical groups joined this year, reports Spin. They're among the site's 470,000 members. Why do musicians like couchsurfing? Spin interviewed The Shackeltons, a post-punk band from Chambersburg, Pa., to find out. The band members say the site has saved them more than $5,000 on lodging costs during 109 nights on the road. But what the band likes best about the site is getting to meet interesting people. Some examples: A mother and daughter in Billings, Montana, who wanted to increase their "couch-surfing karma"; three art students in Fargo who cooked them a spaghetti dinner; and a father and son in Bismarck, North Dakota, who gave them three bottles of home-brewed kombucha tea. That would be music to the ears of a lot of budget-conscious travelers. [Spin] MORE RESOURCES Airbedandbreakfast is a site that enables anyone with an airbed (or couch or bed) to rent it out for the night.

Scotland wants you to taste its quintessential dish in the land where the idea of cooking liver, oatmeal, and onions inside a sheep's belly was first dreamed up. Really, it's not so bad&#8212;and just because my name is MacNeil doesn't mean you can't trust me. I'm not the only fan. In fact, the country's national poet, Robert Burns, loved the stuff so much he dedicated an entire ode to it. Each year, on his January 25th birthday, every self-respecting Scot holds a Burns Dinner in honor of the man and recites the Address to the Haggis before serving it with a lot of whisky. If you think you have to be there in order to get what all the fuss is about, well, you're in luck: Last-minute discount packages to experience Burns Night in Scotland were just announced. The three-night deals to Edinburgh or Glasgow start at $499 and include a traditional Burns Night Supper, a city tour, transfers, breakfast daily, and either an evening at a local pub or a ghost tour. This January is even more special because it's the 250th anniversary of Robert Burns’s birthday, and Scotland is using the occasion to launch Homecoming 2009, a yearlong series of events celebrating Burns and other Scottish favorites such as whisky and golf. As for the "neeps and tatties" usually served alongside haggis? Don't look at me&#8212;you're on your own there! RELATED Scotland's Big Bard Year: Robert Burns's Festivities

Our online trip coaches always have inside information and tips for us. Stephen Keeling, author of the first-edition "Rough Guide to Puerto Rico," recently told us about a nifty festival happening this weekend on the island. Here it is, in his words: The Hatillo mask festival (Festival de las M&aacute;scaras) is one of Puerto Rico's most exuberant celebrations, so you are in for a real treat! Held on December 28, the festival actually commemorates King Herod's attempt to kill baby Jesus by ordering the murder of all first born sons. These days it's a big party; the men of the town wear florid masks and costumes to collect money for local churches or charities (with as many pranks as possible), there's a big parade with floats, lots of mouth-watering food and plenty of music and dancing. Given the thousands that turn up to celebrate, visiting the festival can be tricky! The best way would be stay near the town: the Parador El Buen Caf&eacute; is a decent three-star hotel on the main highway just outside Hatillo. Once there, the hotel should be able to help with local taxis. Failing that, you can drive to Hatillo from San Juan in around one hour, but I'd leave really early! PREVIOUSLY In time for the holidays, "Scared of Santa" photos Exclusive: New York's holiday windows as festive as ever