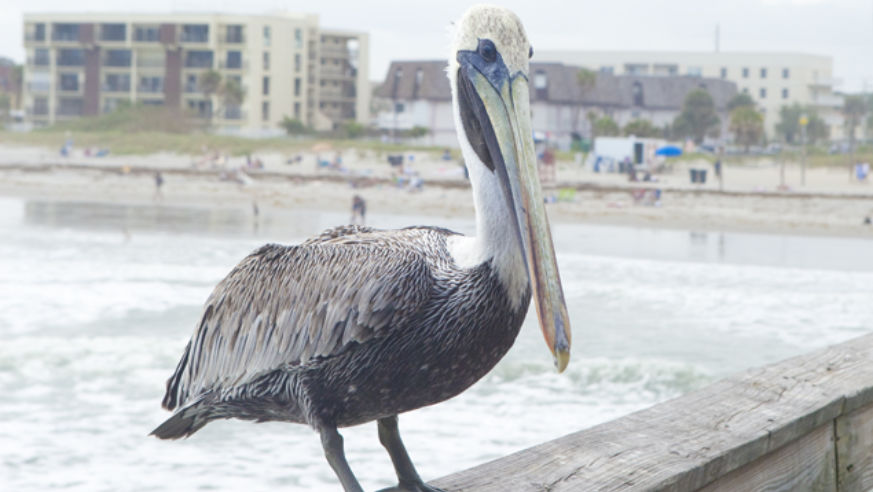 If you've got three days and a tank of gas, the beautiful beach towns of Florida's "Space Coast" make for a perfect winter getaway!

It was my second day at the Orlando theme parks, and I was waiting in yet another long line when I spotted what I assumed was an animatronic squirrel. "That's amazing," I mused to my family. "Those inventive Disney engineers managed to make that mechanical squirrel seem so lifelike." "Mom?" asked my younger son, sounding slightly worried. "I think that might be a real squirrel." We all looked at it. "I can't really tell," my older one faltered. We were in a kind of stupor. For the past 48 hours, everything we touched, saw, sat on, or ate was a calculated part of the theme park experience.

What this vacation needed, I decided then and there, was balance. So leaving the big admission fees, long lines, and ersatz charms of Orlando behind, we took a three-day detour to Florida's Space Coast. There, about an hour's drive from downtown Orlando, in the shadow of the incredible Kennedy Space Center at Cape Canaveral (a must-see for families with kids), we enjoyed the funky sensibility and down-to-earth prices and had some up-close experiences with nature that became the centerpiece of our vacation.

The Space Coast, a scenic, 72-mile stretch roughly between Titusville and Melbourne, is in transition. Back in the 1960s, it was at the white-hot center of an ambitious national space program—the area is so rocket-crazy that the locals even had the area code changed to 321. The beachside towns along the Atlantic coast became a powerful draw for big-domed rocket scientists and future-minded tourists who lined up to gawk at the frequent liftoffs.

Visitors today are discovering the area's terrestrial pleasures: hiking, surfing, scuba diving, and swimming. "Our greatest asset has always been our beach access," says Rob Varley, the Space Coast Office of Tourism's executive director. That goes for visitors and locals alike: "I can make an appointment to see my lawyer," Varley says, "but I know he'll cancel if the surf's up!"

As I drove east into Titusville from Orlando, I did something for the first time during my trip to Florida: I rolled down the window and shook out my ponytail, content to let the breeze, not a sub-zero air conditioner, ruffle my hair. A string of strip malls soon gave way to Titusville's historic downtown—a few sleepy blocks of late-19th-century brick buildings along the Indian River. By the time I had driven through, on Route 406, to get to the Merritt Island National Wildlife Refuge (fws.gov/merrittisland, day pass $5 per car), my family had replaced our mouse-ear hats with binoculars.

The 140,000-acre preserve consists of brackish estuaries and marshes, home to egrets, herons, manatees, feral hogs, tortoises, and American alligators. We sampled a few hiking trails, from a quarter-mile to five miles, that were perfect for family members, especially the ones with short legs. Less physical, but no less rewarding, was the Black Point Wildlife Drive, a seven-mile road that allowed us to steer straight into the habitats of bald eagles, osprey, and cartoonish-looking roseate spoonbills.

We spent the rest of the afternoon at pristine Playalinda Beach, part of Canaveral National Seashore, across the water from the Space Center. It's a great place to observe—but not disturb!—nests of giant loggerhead turtles.  At sunset, we headed to the five-room Casa Coquina Bed and Breakfast (4010 Coquina Ave., Titusville,casacoquina.com, from $79) for the evening. A tall suit of armor greets you in the lobby, and local legend has it that Al Capone, who wintered in Titusville in the 1930s, rested his head and his guns here.

If most theme parks are generic enough to appeal to the average American, Cocoa Beach is just the opposite: excessive, exuberant, and defying good taste at every turn. The hub of tacky T-shirt shops, hotels, and restaurants—think large neon signs and bubble-letter ads pinned on every available surface—is redeemed by its unpretentiousness.

You've got to love a place that's home to the Mai Tiki Bar (401 Meade Ave., Cocoa Beach, cocoabeachpier.com, beer at happy hour $1.35), the Mai Tiki art gallery (251 Minuteman Causeway, Cocoa Beach, maitiki.com), and a "Welcome to Cocoa Beach" sign flanked by—what else?—a tiki torch. What all that tiki really means is that the beach is never far away. Even the cheapest hotels have, if not a view of the ocean, then at least the sound of lapping waves floating through your open window. Cocoa Beach's six-mile stretch of white sand plays host to world-famous surf competitions and was the stomping ground for surf legend Kelly Slater. It's also home port to the two retail monoliths that have grown up in his shadow: Ron Jon Surf Shop (4151 N. Atlantic Ave., Cocoa Beach, ronjonsurfshop.com, lessons from $50, surfboard rentals $10 a day) and Cocoa Beach Surf Company (4001 N. Atlantic Ave., Cocoa Beach, cocoabeachsurf.com, hourlong group lessons $40 per person, four-hour surfboard rentals $30). Both stores sell plenty of tchotchkes—fake plastic leis, bamboo back-scratchers—as well as more serious surfer garb like rash guards and board shorts. Both also rent gear and offer surf lessons. Bonus: Cocoa Beach Surf Company has a massive, 5,600-gallon tank with blacktip sharks and exotic fish, which my kids loved.

Down the street, we checked into the oceanfront South Beach Inn (1701 S. Atlantic Ave., Cocoa Beach, southbeachinn.com, doubles from $90), where our basic room had a pull-out couch and was comfortably big enough for my family of four, before heading to dinner. On the north edge of town, we discovered Roberto's Little Havana (26 N. Orlando Ave., Cocoa Beach, robertoslittlehavana.com, Cuban sandwich and black beans $7.25), a cozy, family-run spot specializing in seafood and Cuban fare. I opted for a savory Cuban sandwich, served with an ample side of black beans topped with freshly cut onion.

From Cocoa Beach, Highway A1A winds south past a series of appealing, well-maintained public beaches. My family didn't make it 20 minutes before pulling over to get some sand between our toes. At the beach across the street from Patrick Air Force Base, we found gentle waves and a foot-friendly, sandy bottom. You can always see pelicans bobbing on breaks, and if you arrive early enough, as we did, you can spot what the natives boast about, too—regular visits from families of dolphins.

Next door, locals also favor family-run Sun on the Beach (1753 Highway A1A, Satellite Beach, sunonthebeach.co, breakfast $7), where the owners import their own brand of Lowcountry cooking to Florida. "Everybody comes here," our waitress told us without a gram of false modesty. And for good reason. At lunch, fried chicken dipped in buffalo spices is served on top of buttermilk waffles. But even food this good couldn't keep us indoors for long.

After lunch, we made a stop at Hatts Diving Shop in Melbourne (2006 Front St., Melbourne, hattsdiving.com, open-water scuba class from $299). "We want to introduce all different kinds of people to scuba diving," says co-owner Starr Hatt, who exudes the implacable calm of someone who's spent a fair bit of time underwater. Hatts offers an open-water scuba course where, for the cost of renting equipment and gassing up a boat, you and your family (kids must be over 12) get easy-to-follow instruction to help get you face-to-face with the sea world's own version of Technicolor. Yes, theme parks are fun, but it's also nice to be reminded that when it comes to locations where you can find once-in-a-lifetime thrills, it's not such a small world after all.