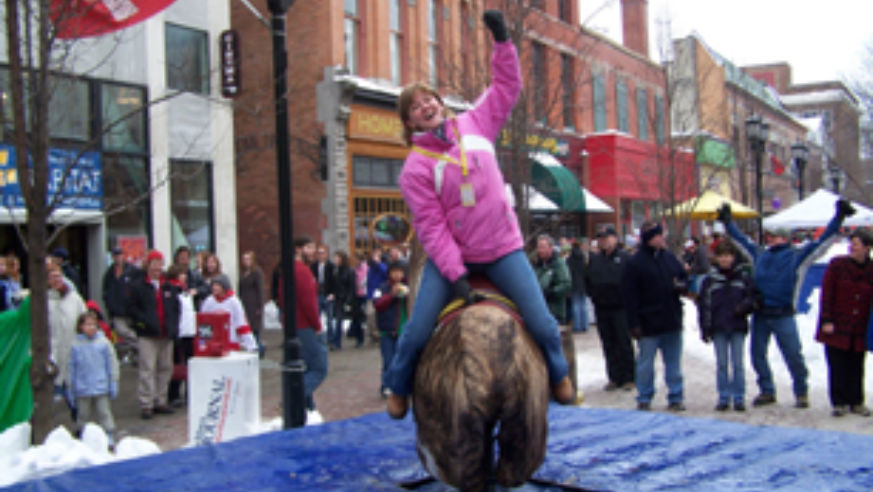 Ithaca has come up with a clever idea that other cities should copy. The town of about 30,000 residents in central New York state is throwing a party for teachers Feb. 16-24—which is when hundreds of thousands of teachers are on break for "Winter Recess."

A teacher can receive discounts on dining (such as 15 percent off a meal at the famous Moosewood restaurant) and lodging (such as an $89 a night rate at the downtown Holiday Inn, which is 40 percent off the standard rate). "Bring your school ID, your union membership, or a note from your principal, and you're in," says IthacaLovesTeachers.com.

Here's a photo of Newfield, N.Y., teacher Lisa Miller riding a mechanical bull at last year's Winter Recess teachers fest. The ID tag she's wearing is the V.I.T. (Very Important Teacher) pass that can be used to get discounts around the city.

This year, concerts include Taj Mahal and Lyle Lovett. (Teachers can get free beer and wine at the concession stand. It could get crazy!)

There are educational events, too, such as a reading by novelist Denis Johnson, winner of the 2007 National Book Award.

Food will be a big theme at the party. Ithaca has more restaurants per capita than New York City...

The town's emphasis is on organic and gourmet food. I recommend that you grab a latte at one of the Gimme Coffee shops, or try a dish of shrimp and grits at Maxie's Supper Club (which offers surprisingly good Southern comfort food for a Yankee restaurant). During "Winter Recess" week, both of these places have buy-one-get-one free offers for teachers.

When Ithaca first launched this promotion a year ago, officials claimed that it was the first citywide festival for state public school teachers. Here's hoping that other cities copy the concept—especially some cities in warm weather destinations. More details at IthacaLovesTeachers.com

[Of course, you don't have to be a teacher to enjoy many of the events. For example, many parents may want to take advantage of winter recess to scout higher education options for their kids, such as at Ithaca's Cornell University and and Ithaca College. Each school has well-regarded programs in hospitality and culinary training, in case any of you have children interested in joining those parts of the travel industry.]