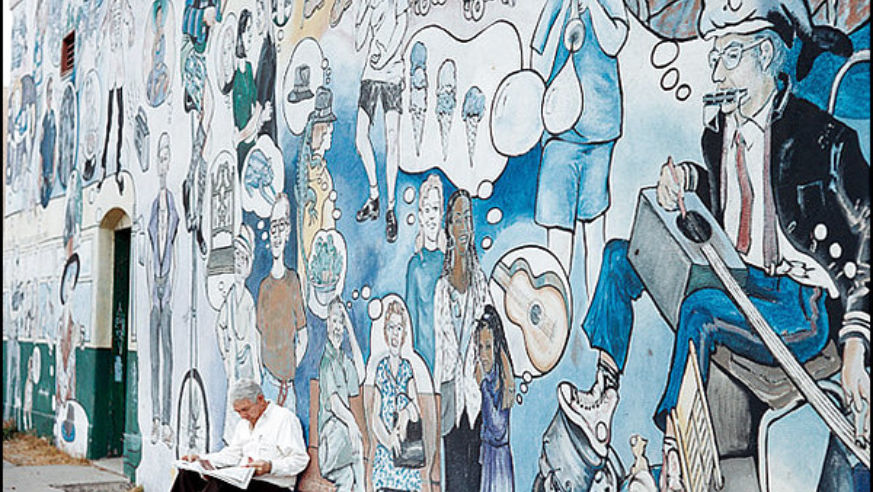 The revitalized Arizona city is ideal for a three-day trip: You can stay somewhere funky, eat amazing Mexican food, and even pick up a new fetish

It's 10 p.m. at the Hotel Congress, the neon-lit epicenter of bohemia in Tucson. In Club Congress, the hotel's cavernous nightclub, a local avant-garde French pop singer, Marianne Dissard, is warbling a French song about love's "little lies" with unusual forcefulness. She's accompanied on electric guitar by her husband, the improbably named Naim Amor. But while there's nothing flawed about Naim's guitar playing, there's no mistaking who's the star of this show. A documentary filmmaker and all-around Tucson scenester, Dissard has the martini-sipping crowd of about 75 wrapped around her finger.

"Tonight is a very special night for me," she says, squinting through the glare of the stage lights. "I am celebrating the 10th anniversary of when I moved to Tucson. I feel so glad I found this amazing, diverse, artistic city. I love you all."

The audience whoops loudly. "You tell it, sister!" one man shouts.

Earlier that afternoon, an innkeeper was using similar adjectives to describe Tucson: "It's arts-oriented, tolerant, and culturally diverse," said Jeff DiGregorio, co-owner of the Royal Elizabeth B&B Inn, in a 128-year-old adobe mansion downtown. "I'm biased, but I think we're very intellectual, too."

All this enthusiasm can get suspiciously fervent, but there must be something to it. Tucson, 120 miles southeast of Phoenix, has long been known as a laid-back Southwestern cowboy city with near-perfect weather; lately, the town of 510,000 is making more noise. Says DiGregorio, "Tucson has the culture of L.A., but with the intimacy of Santa Fe."

The 1930s-era Hotel Congress has one foot in the past and the other in the present. There's an Old West-style bar (the Tap Room), a sleek separate restaurant (the Cup Café), retro rooms, and neon signs throughout.

Then again, not everyone wants to sleep above a nightclub. The Royal Elizabeth--or The Liz, as it's known around town--is furnished in a style DiGregorio calls an "antiques medley," where pieces from the Victorian, craftsman, and art deco eras casually coexist.

DiGregorio, a Tucson native, and his partner, Chuck Bressi, were living in Washington, D.C., when they saw the building online and bought it sight unseen. Two weeks later, they moved to Tucson and got to work. Bressi handles the books and the cooking--and amuses guests with his quiet wit. DiGregorio, meanwhile, is a walking encyclopedia of downtown history. He also always seems to be around to help when it's time to make dinner plans.

The restaurant where he's most likely to send guests is the nouveau Mexican Café Poca Cosa. Suzana Davila, the café's waifish chef, is a former model from Guaymas, Mexico, and she imported her love of mole, a rich sauce made with chocolate, red wine, and chilis. Handwritten chalkboard menus at each table change daily. If a diner gives Davila carte blanche, she'll recommend her favorite: a chocolateless Oaxacan mole verde--made from pumpkin seeds, pistachios, cilantro, and serrano peppers.

Another part of downtown, along 4th Avenue, is considerably funkier. There are counterculture bookstores, and, this being the Southwest, there are shops selling therapeutic crystals. The unofficial mayor of the avenue is Dominique Francesca. She's often found standing in the doorway of Café Jinx, surveying the scene. Francesca is also an artist and photographer, and the café's expert cook; her baby spinach frittata and dark French Roast coffee are hits with the rock bands rolling through Tucson.

Francesca hasn't always been a fixture here, though it often seems that way. She explains that she spent half of the '90s "getting my head together" on a road trip in her Chevy Suburban. Upon arriving in Tucson, she ditched her Suburban for a room at the Hotel Congress, and met artists who convinced her to settle in town for good. "The city has quite a funky groove," she says. "I guess I sort of feed off it."

A mission beyond downtown

Like so many Western cities, Tucson has its share of sprawl. It's worth braving for the ghostly San Xavier del Bac Mission (1950 W. San Xavier Rd., 520/294-2624, free), near the Tohono O'odham reservation southwest of town. Built by Franciscans in 1797, the white adobe church has spectacular arches, domes, and towers. One of the better craft stands outside the mission is a Hopi jewelry shop called Loo-Lol-Ma's. What stands out are the fetishes, alabaster Zuni charms that come in different animal shapes.