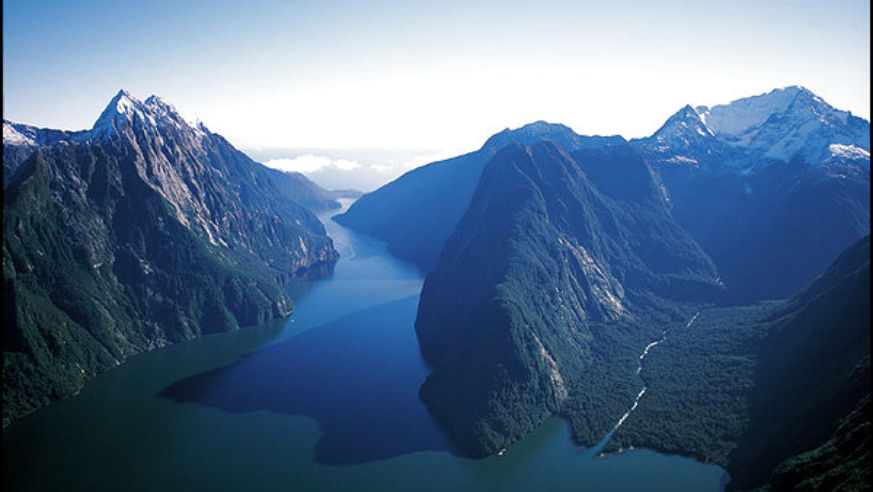 Milford Sound, one of the world's wonders

Six years ago, Jeff and Linda Lowe sold their home in Santa Barbara, Calif., quit their jobs, and relocated to Kailua, Oahu. They live off a few rental properties they own, spend a lot of time at the beach, and travel as much as they can. "Our latest trip was a last-minute, 28-day cruise around South America," said Linda, who is 53, like her husband. "We fell in love with Chile and the Patagonia region, especially the penguins."

In mid-February, the couple is starting an adventure that'll make nine-to-fivers even more jealous: They're off to New Zealand and Australia for five weeks, and they asked us to help plan the trip--specifically in New Zealand, where they'll be for most of their vacation. "We'd like to see as much as possible," Linda wrote to us.

The first thing we did was talk the Lowes out of a 12-day cruise from Auckland to Sydney, because it would be difficult to spend all that time at sea and still see everything they wanted to on land. A regional upstart airline, Pacific Blue, has flights from Christchurch, on New Zealand's South Island, to Melbourne, for $154.

The Lowes are starting off in Auckland, on the North Island, and working their way south in a rental car. We told them that making hotel reservations more than a day in advance is rarely necessary. Two essentials: a detailed road map (bought locally at any bookstore) and a reliable accommodations guide from the country's automobile association (available for free at almost every hotel in the country).

Jeff and Linda were curious about a festival happening February 17 to 20 in Napier, in the Hawkes Bay region. After an earthquake destroyed Napier in 1931, the city was rebuilt in the pastel colors and art deco style popular at the time--giving Napier its claim to fame and the genesis of the annual Brebner Print Art Deco Weekend. Everyone dresses up in vintage suits, top hats, and flapper dresses for jazz concerts, dances, and a big Great Gatsby Picnic. No need to bring along costumes, we told the Lowes; a couple of stores in town rent 1930s-style clothing for $3.50 and up.

"We're interested in the cultural similarities between the native peoples of New Zealand, Australia, and Hawaii and want to meet some of the Maori," said Linda. On the drive from Auckland to Napier, the Lowes are planning on a stop in Rotorua. The city is known for two main reasons--a third of the population is Maori, and it is near one of the most volcanically active areas in the world. A good place to learn about both is the Whakarewarewa thermal village, where the entrance price includes a guided tour of the village, access to its mud pools and hot thermal lakes, and a performance of traditional Maori song and dance. In Wellington--the capital, and the country's best all-around town--the Te Papa Tongarewa Museum is a must. Admission is free, and there are Maori sailing vessels, a marae (traditional meeting place), and hundreds of native artifacts.

From Wellington, the Lowes will board a three-hour ferry and then spend about three weeks on the South Island. After several days of leisurely driving down the coast, it's time to meet with some of Jeff and Linda's favorite creatures. A colony of blue penguins puts on a nightly show at Oamaru, three hours south of Christchurch. Returning from an industrious day of fishing just after dusk, the birds hop along adorably from rock to rock, back to their nests, while a crowd views from a respectful distance.

Another two hours south, at Dunedin (duh-nee-din), the Lowes are detouring east out onto the Otago Peninsula. Near the end of the road is the Royal Albatross Centre, where, with a little luck, they'll see a few of the giant birds. Most people turn around here, but we directed the Lowes to the Natures Wonders Naturally tour, at a sheep farm on the ocean's edge. Visitors ride on ultrarugged eight-wheel ATVs while the driver occasionally spins 360's in the mud, and there are chances to get up-close views of penguins and baby fur seals along the coast.

"Stewart Island seems interesting, though we don't know much about it," said Linda. The third largest of New Zealand's isles, where nearly 85 percent of the land is a national park, is home to a few hundred full-time residents. We advised the Lowes to take the ferry over from Bluff. The South Sea Hotel, which has quiet units with kitchenettes behind the main building, is a short walk from the wharf. We told the Lowes to look into a guided tour of the bird sanctuary on nearby Ulva Island, run by a Maori woman named after the island.

The South Island's west coast is the focus of their final 10 or so days in New Zealand, and they saved the best scenery for last. The first stop is Milford Sound, one of the world's wonders, with countless waterfalls and sheer cliffs that shoot out of the sea more than a mile high. Since there isn't much in the way of lodging nearby, we recommended the Lowes go for the overnight cruise on the Milford Wanderer, which includes bunks, meals, and the use of sea kayaks.

From there, we set the Lowes on the prettiest path to Christchurch: up through the lakes and mountains of adventure capital Queenstown; through the lakeside town of Wanaka (wah-ni-kuh); past the snowy trio of the Mount Cook, Fox, and Franz Josef glaciers; and, finally, across Arthur's Pass National Park, which is filled with vistas of rivers and mountain peaks that'll overwhelm the average digital camera's memory card.

If our suggestions don't suffice, the Lowes can talk to a local at Tourism New Zealand's 24-hour toll-free number. Have a blast! We nine-to-fivers are indeed jealous.