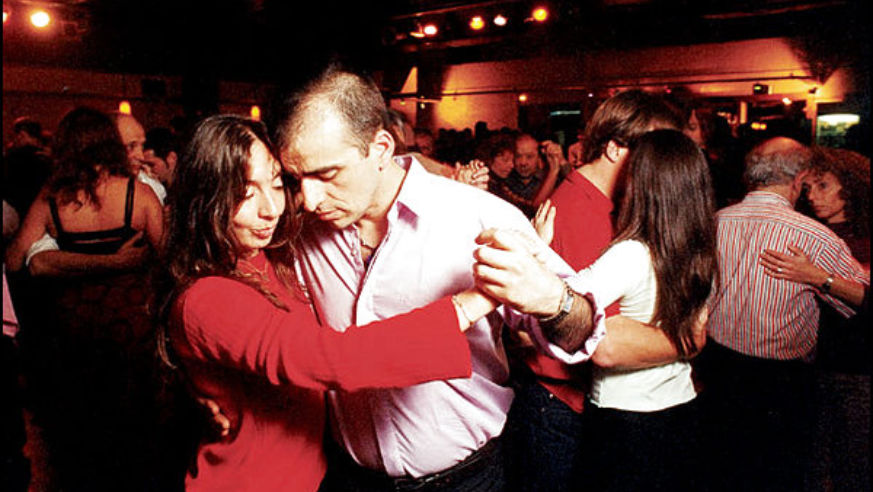 South America's most sophisticated city sure knows how to kick up its heels. But you better pace yourself: primetime is way north of midnight.

Most restaurants don't fully get swinging until at least 10 p.m. The classic place to go is a parrilla, a barbecue restaurant where tender cuts of beef are seared over wooden coals by a parrillero in a bloodstained apron. Bife de chorizo (sirloin), morcilla (blood sausage), and chinchulines (tripe) are all liberally slathered with either chimichurri (sauce of parsley, garlic, olive oil, lemon, and other assorted herbs) or salsa criolla (finely chopped tomatoes and onions). The casual Desnivel, in the historic San Telmo district, is always packed with locals. With a cheap glass of wine, the bill usually comes to about $7 a person.

An imposing man named Carlitos serves whatever he feels you should eat at Don Carlos, a parrilla in the shadow of La Bombonera soccer stadium in the Boca neighborhood. He'll begin by putting down plates of croquettes, marinated peppers, or pizzas. Then he'll ask how hungry you are. To Carlitos, "a little hungry" means very hungry, and anything else means you're a Texas rib-eating champion. Either way, it's wise to have skipped lunch. Carlitos keeps an eye on the sizzling bife de lomo (filet mignon) and juicy sweetbreads while watching the televised horse races. He'll focus on making sure you're finished before placing down desserts--tiramisu, bread pudding, and the Argentine version of flan: crème caramel garnished with whipped cream and dulce de leche (a spread of caramelized condensed milk). Finally, he'll scribble the price he feels is right on the tablecloth. For people he doesn't know, it's usually around $15; friends pay about $5 less.

The buzzy neighborhood of Palermo has more chic places to eat and drink than you can keep track of. Bar El Diamante, a tapas restaurant in a converted house, is more cozy than aggressively hip. On warm nights, the rooftop makes an ideal setting for enjoying small plates of delicious grilled meats, fish, and pastas (a four-course meal with wine is $18). Nearby, at Thymus, the chef is trained in the classical French tradition. He turns out artful dishes such as wild mushroom salad, grilled loin of venison, and chocolate soufflé. A three-course tasting menu starts at $13. For a little more of a splurge, Oviedo, in the posh Recoleta neighborhood, serves Spanish-style seafood in a room with warm bistro lighting. A three-course prix fixe is $20 to $25, depending on the wine.

The next few hours are best suited to laying low over drinks. At the old-timey locals' bar Lo de Roberto, dusty bottles, faded photos, and worn lyric sheets line the walls. Order a bottle of Vasco Viejo wine ($4), some seltzer ($1), and a bucket of ice-and mix it all up. Guitarists and tango singers wander in after midnight, and the owner Roberto will sternly shush anyone who dares to talk while they play.

For better quality wines, Gran Bar Danzon is a downtown lounge favored by sommeliers. Danzon sells dozens of Argentine wines by the glass, most of which are hearty cabernets and malbecs from top labels such as Catena and Weinert. Each glass comes with a ticket, in Spanish, explaining the flavors and properties of the wine.

The Faena Hotel + Universe is a year-old boutique hotel in Puerto Madero, the docklands district. Rooms start at $300, but the scene's what you come for anyway, and you can get enough of a taste at the patio pool bar, open in summer. The drink list leans heavily toward champagne, and white-cushioned banquettes provide a comfortable place to sit back and scope out all the beautiful people.

In a Palermo warehouse, a dance club called Niceto has a Thursday night international hip hop/electronic-music party called Club 69, where a campy mix of breakdancers and transvestites find common ground ($7 cover for women, $9 men). Club information is always changing, but the free monthly Spanish-language magazine Wipe, found at most Palermo stores and restaurants, has up-to-date bar and party listings.

With all the overproduced tango shows advertised around town, it might seem like tango is a tourist trap. Do as locals do; avoid Vegas-style productions for a traditional, under-the-radar milonga (dance hall). Different milongas take over clubs on various nights. One lively weekend spot is La Viruta Tango, in a Palermo community-hall basement ($2 cover). To the tune of squeezeboxes and violins, you might find yourself pressed up against locals, sweeping around the dance floor, as the light of morning erases the darkness.

Last year, Mariano and Pablo Gimenez opened the Bo-Bo Hotel in a 1920 mansion in the Palermo district. Six of the seven rooms--all of which have free Wi-Fi--are themed to modern art movements. The Minimalist Room has ecru walls and white bedspreads; the Pop Room references the 1960s with a plastic orange chair and a photo of a Ford Falcon.

For the seventh room--on the top floor, with a terrace and a skylit Jacuzzi--the brothers abandoned the art theme and named it the Argentina Room (left, $120). Each morning, a free breakfast of croissants, yogurt, and café con leche is served in the restaurant. Guatemala 4882, 011-54/11-4774-0505, bobohotel.com, from $80. --Celeste Moure