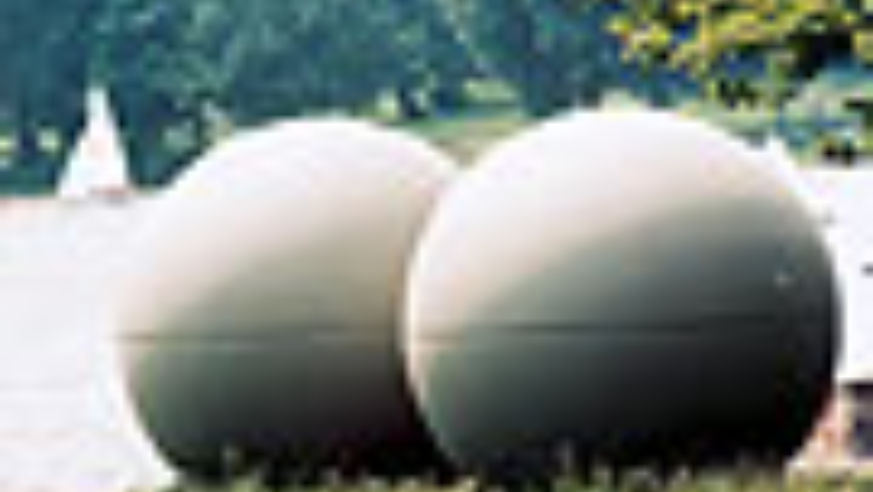 This summer, Sculpture Projects Munster will feature outdoor installations by 37 artists. Here are some highlights.

Sculpture Projects Münster is one of Europe's largest outdoor art exhibits, but it's only held once a decade (skulptur-projekte.de). This year, 37 artists will explore how art can transform public space. Don't worry if you can't make it to Germany between June 17 and September 30: Thirty-four works from the previous exhibitions are still on display in the city. Launch the slide show to see three past favorites and to preview one of this year's installations.

1977 Giant Pool Balls
Swedish-born Claes Oldenburg--famous for oversized versions of everyday objects--planned to transform Münster into a colossal billiards table. Limited funds, however, yielded just three concrete balls, each nearly 12 feet in diameter, installed next to man-made Aa Lake. Locals were slow to embrace Oldenburg's work--in fact, at installation it was ridiculed as an eyesore--but now it's a beloved symbol of the city.

1987 Cherry Pillar
Inspired by a dead cherry tree that stood in a drab downtown parking lot, German artist Thomas Schütte said he'd like to "garnish" the site with cherries. The popular sculpture eventually prompted the conversion of the lot into a pedestrian plaza with a café and a fountain. For this year's Sculpture Projects, Schütte will construct a miniature high-rise building atop the plaza's fountain.

1997 The Sanctuary
Herman de Vries built a circular brick wall 10 feet high and 46 feet in diameter on Münster Castle's grounds. Inside is an untouched patch of land that viewers can spy through four portholes. "Within this space, nature is free from human intervention," the Dutch artist said at the time. "What will nature do here? It will do something." What it did was turn into a riot of weeds and brambles, contrasting with the castle's manicured gardens.

2007 Sorry-Installation (Archaeological Site)
Atop a small mound in the city center, Belgian artist Guillaume Bijl dug a deep hole and then placed a 14-foot-tall shingled church spire inside. (It's a play on the city's name: Münster means "cathedral" in German.) To make it look like a true archaeological dig, Bijl sprayed concrete to mimic layers of soil. A surrounding balustrade allows people to peer into the pit--and into a past that never was.