A rare peek at Homeland Security's files on travelers

The oversize white envelope bore the blue logo of the Department of Homeland Security. Inside, I found 20 photocopies of the government's records on my international travels. Every overseas trip I've taken since 2001 was noted.

I had requested the files after I had heard that the government tracks "passenger activity." Starting in the mid-1990s, many airlines handed over passenger records. Since 2002, the government has mandated that the commercial airlines deliver this information routinely and electronically.

A passenger record typically includes the name of the person traveling, the name of the person who submitted the information while arranging the trip, and details about how the ticket was bought, according to documents published by the Department of Homeland Security. Records are made for citizens and non-citizens who cross our borders. An agent from U.S. Customs and Border Protection can generate a travel history for any traveler with a few keystrokes on a computer. Officials use the information to prevent terrorism, acts of organized crime, and other illegal activity.

I had been curious about what's in my travel dossier, so I made a Freedom of Information Act (FOIA) request for a copy. I'm posting here a few sample pages of what officials sent me.

[An I.P. address is assigned to every computer on the Internet. Each time that computer sends an e-mail—or is used to make a purchase via a Web browser—it has to reveal its I.P. address, which tells its geographic location.]

The rest of my file contained details about my ticketed itineraries, the amount I paid for tickets, and the airports I passed through overseas. My credit card number was not listed, nor were any hotels I've visited. In two cases, the basic identifying information about my traveling companion (whose ticket was part of the same purchase as mine) was included in the file. Perhaps that information was included by mistake.

Some sections of my documents were blacked out by an official. Presumably, this information contains material that is classified because it would reveal the inner workings of law enforcement.

I have grayed out other parts of the documents because they contain information, such as my passport number, that I'd rather not share. The parts I've blocked out are colored gray to distinguish from the government censor's black marker.

Here's the lowdown on the records.

The commercial airlines send these passenger records to Customs and Border Protection, an agency within the Department of Homeland Security. Computers match the information with the databases of federal departments, such as Treasury, Agriculture, and Homeland Security. Computers uncover links between known and previously unidentified terrorists or terrorist suspects, as well as suspicious or irregular travel patterns. Some of this information comes from foreign governments and law enforcement agencies. The data is also crosschecked with American state and local law enforcement agencies, which are tracking persons who have warrants out for their arrest or who are under restraining orders. The data is used not only to fight terrorism but also to prevent and combat acts of organized crime and other illegal activity.

Officials use the information to help decide if a passenger needs to have additional screening. Case in point: After overseas trips, I've stood in lines at U.S. border checkpoints and had my passport swiped and my electronic file examined. A few times, something in my record has prompted officers to pull me over to a side room, where I have been asked additional questions. Sometimes I've had to clarify a missing middle initial. Other times, I have been referred to a secondary examination. (I've blogged about this before.)

When did this electronic data collection start? In 1999, U.S. Customs and Border Protection (then known as the U.S. Customs Service) began receiving passenger identification information electronically from certain air carriers on a voluntary basis, though some paper records were shared prior to that. A mandatory, automated program began about 6 years ago. Congress funds this Automated Targeting System's Passenger Screening Program to the tune of about $30 million a year.

How safe is your information? Regulations prohibit officials from sharing the records of any traveler—or the government's risk assessment of any traveler—with airlines or private companies. A record is kept for 15 years—unless it is linked to an investigation, in which case it can be kept indefinitely. Agency computers do not encrypt the data, but officials insist that other measures—both physical and electronic—safeguard our records.

I wonder if the government's data collecting is relevant and necessary to accomplish the agency's purpose in protecting our borders. The volume of data collected, and the rate at which the records is growing and being shared with officials nationwide, suggests that the potential for misuse could soar out of hand. Others may wonder if the efforts are effective. For instance, I asked security expert Bruce Schneier Schneider about the Feds' efforts to track passenger activity, and he responded by e-mail:

"I think it's a waste of time. There's this myth that we can pick terrorists out of the crowd if we only knew more information."

On the other hand, some people may find it reassuring that the government is using technology to keep our borders safe.

Oh, one more thing: Are your records worth seeing? Maybe not, unless you've been experiencing a problem crossing our nation's borders. For one thing, the records are a bit dull. In my file, for instance, officials had blacked out the (presumably) most fascinating parts, which were about how officials assessed my risk profile. What's more, the records are mainly limited to information that airline and passport control officials have collected, so you probably won't be surprised by anything you read in them. Lastly, there may be a cost. While there was no charge to me when I requested my records, you might charged a fee of up to $50 if there is difficulty in obtaining your records. Of course, there's a cost to taxpayers and to our nation's security resources whenever a request is filed, too.

However, if you are being detained at the border or if you suspect a problem with your records, then by all means request a copy. U.S. Customs and Border Protection is required by law to make your records available to you, with some exceptions. Your request must be made in writing on paper and be signed by you. Ask to see the "information relating to me in the Automated Targeting System." Say that your request is "made pursuant to the Freedom of Information Act, as amended (5 U.S.C. 552)." Add that you wish to have a copy of your records made and mailed to you without first inspecting them. Your letter should, obviously, give reasonably sufficient detail to enable an official to find your record. So supply your passport number and mailing address. Put a date on your letter and make a copy for your own records. On your envelope, you should conspicuously print the words “FOIA Request." It should be addressed to “Freedom of Information Act Request,” U.S. Customs Service, 1300 Pennsylvania Avenue, NW., Washington, DC 20229. Be patient. I had wait for up to a year to receive a copy of my records. Then if you believe there's an error in your record, ask for a correction by writing a letter to the Customer Satisfaction Unit, Office of Field Operations, U.S. Customs and Border Protection, Room 5.5C, 1300 Pennsylvania Avenue, N.W., Washington, D.C. 20229.

Readers' Photos: A slide show of our fave shots

We've gotten a huge number of great photos from travelers&mdash;over 4,000 have been uploaded to date. Click here to see a slide show of our current favorites, and don't forget to upload your own photos, Travel Journals, and videos to myBudgetTravel. You'll have to register, but you'll only have to do it once, and you'll also be able to comment on and rate articles and other readers' contributions. 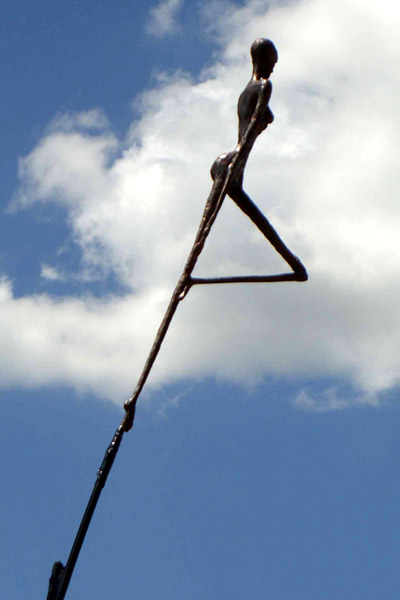 Do men have better travel experiences than women?

We recently published a Q&A; with Alex Boylan, star of the upcoming show Around the World for Free. In response, the female travel writer who runs the blog Less Than a Shoestring had an interesting response. She singled out one of the stories Alex told about how in Kenya he had hitchhiked to a Maasai settlement in a rural area filled with armed men. "I think that is an amazing experience I probably would have passed on," says Hilary, who goes by the pen name PoetLoverRebelSpy. "When faced with a risky choice," she says, "women are more likely to err on the side of caution." PoetLoverRebelSpy notes "how gendered travel can be." She thinks that many places and experiences were open to Alex because he was a young man, and not a woman traveling solo. She clarifies: "This is not to imply that women couldn't do this trip or that women *shouldn't* travel anywhere these men did, or that we are somehow inherently more fragile or weak than male travelers. But at the same time, women do consider the risks of rides or offers of accommodation from strange men, traveling in areas of unrest and even being out after dark differently from their male counterparts. Further, female travelers are harrassed and targeted in ways that men on the road are not. I'm sure it's not possible to quantify the difference that this confidence and access makes, but I believe more effort should be made to note it." What do you think?

In time for the holidays, "Scared of Santa" photos

During the weeks leading up to Christmas, in every shopping mall in every town, parents line up with their fidgety kids for an adorable photo of them on Santa's lap. Only it doesn't always work out that way. And hundreds of readers of the Chicago Tribune submitted the photographic proof. Two of the newspaper's editors, Denise Joyce and Nancy Watkins, collected and captioned 250 of the most astounding shots of Santa poses gone awry and published them in the recently released book Scared of Santa: Scenes of Terror in Toyland ($10). To get you into the true spirit of the holidays, click here for a slideshow of our 15 absolute favorites, with condensed captions from the book. Ho, ho, ho&mdash;or rather, Ha, ha, ha! PREVIOUSLY Photos: New York’s Holiday Windows as Festive as Ever Our Monster List of Travel Gift Roundups 12 Ways to Survive Holiday Travel 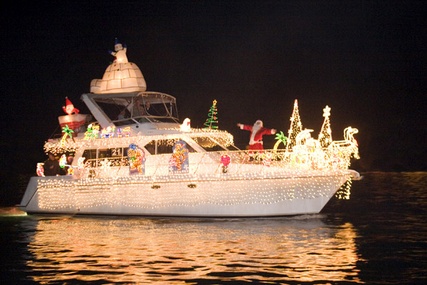 California's Newport Beach Christmas Boat Parade, an event likened to the Tournament of Roses (the huge parade before the Rose Bowl football game), is celebrating its 100th birthday this year. About 100 boats are participating, from kayaks to huge yachts. They'll parade around 14 miles of Newport Beach's bay and channels, in view of businesses, homes, and public beaches (there's a detailed map and timetable here.) The parade usually attracts 1 million viewers a year&mdash;and boat owners really get into it. Word is that some have spent $50,000 adorning their yachts in Christmas lights, creating elaborate scenes with huge Christmas trees, gingerbread men, candy canes, and Santas (surrounded by palm trees&mdash;this is Southern Cali, after all). The parade has been around in some incarnation for 100 years, but it wasn't until 1946 that the event was moved from a summer contest to a holiday one. In that year, city employees decorated a barge with a lighted Christmas tree that they towed around the harbor, entertaining residents with live Christmas caroling. Newport Beach is an Orange County resort town on one of California's skinny peninsulas that jut out into the Pacific. Wednesday through Sunday, 6:30 p.m. (finishes around 9:00 p.m.) At 6:25 p.m. on Wednesday, there will be fireworks to celebrate the parade's 100th birthday. Organizers suggest you arrive early to avoid traffic and to get parking; all the city's lots will be open. MORE Seattle also has a holiday boat parade And so does Portland PREVIOUSLY Exclusive: New York's holiday windows as festive as ever