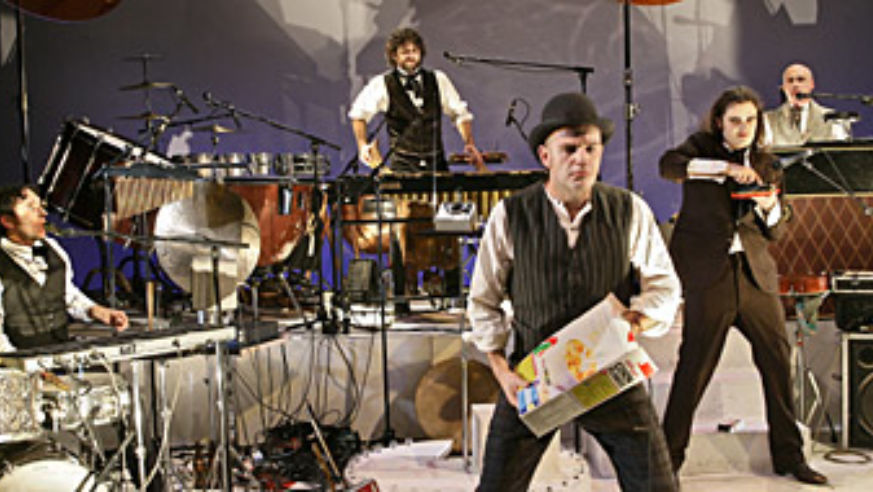 Paris may possibly be the furthest thing one can imagine from the Wild West. But for one month this fall, a rip-roaring show called "The Spaghetti Western Orchestra" brought a little bit of the mythical frontier to a corner of the 11th arrondissement. And the show comes to the U.S. for a tour toward the end of this month.

The modern-day cowboys are actually a group of Australian musicians playing the songs of Ennio Morricone, an Academy-Award winning composer of American western films like A Fistful of Dollars (which starred Clint Eastwood). Even if you have not seen the movies, most of the songs are instantly recognizable. At one recent performance, even French members of the audience were able to join in for a sing-along of sorts to the theme of Le Bon, Le Brut et le Truand (from The Good, The Bad, and the Ugly).

"The show is popular wherever we play it," said Graeme Leak, one of the musicians, in an e-mail interview. "It reminds people of the old days of cinema when you left the theater with almost a euphoric feeling."

Anyone who came to the show expecting a full orchestra may have been surprised to find just five musicians on the stage, although the performers do play 100 instruments between them. In addition to a full range of traditional instruments, the performance features sound effects using cornflakes, clinking bottles, and a rubber glove.

"The Spaghetti Western Orchestra" also is not just a concert. The five musicians each play a character: the bank teller, the lie teller, the young feller, the "raconteur" (storyteller), and the mysterious "goldschmeller." Skits and stories are interspersed between the songs, both to pay homage to and poke fun at the old western films, complete with "gun shots" and creaky hinges.

The performers have perfected their cheesy Western accents, even though they are native Australians. In Paris, most of the dialogue was spoken in English, with a few terribly pronounced words in French thrown in to make the audience laugh.

"Whenever we arrive in a new country it takes a few days for us to work in the right mix of language and references," said Leak, who plays the bank teller. "We are not multi-lingual, but we try to include some words and references in the language of our host country to bring the audience closer to us."

The language barrier didn’t seem to be a problem in Paris, as the few hundred audience members laughed, clapped and sang along (with cue cards). At the end of the performance the musicians returned for three curtain calls, eventually leading to a standing ovation.

The "Orchestra" first came together in Australia in 2000. Stints at the 2006 Edinburgh Festival and the 2007 Montreal Jazz Festival proved a great success, and the show has since played in in the German cities of Hamburg and Cologne.

The American tour dates are as follows:

October 24 at the State Theater in New Brunswick, N.J.

October 27 at the Flynn Center for the Performing Arts in Burlington, Vt.

October 28 at the Hopkins Center for the Arts in Hanover, N.H.

October 31 at the Carlsen Center in Overland Park, Kans.

November 6 at the Del E. Webb Center for the Performing Arts in Wickenberg, Ariz.

November 7 and 8 at the Scottsdale Center for the Performing Arts in Scottsdale, Ariz.

November 10 at the UT Tyler Cowan Center in Tyler, Tex.

Ticket prices range from $20 to $55, depending on the venue. For more information, visit spaghettiwesternorchestra.com.