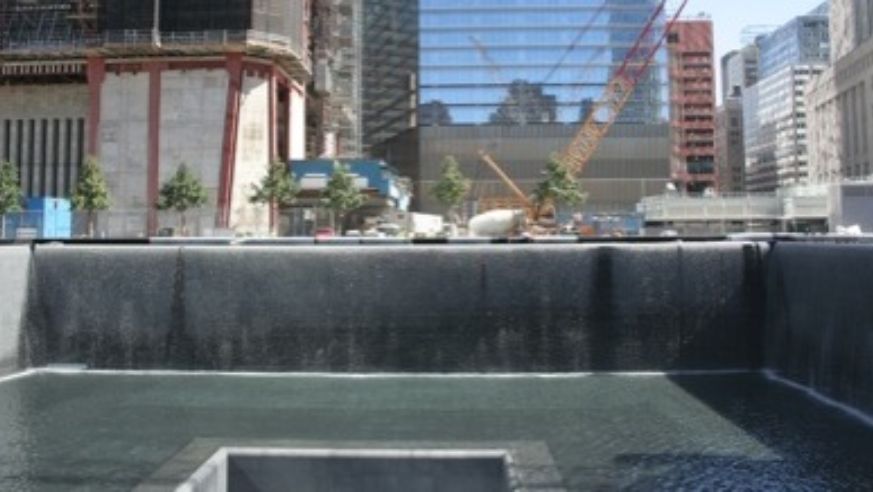 One month before the 10-year anniversary of 9/11, I got a preview of the National September 11 Memorial in Lower Manhattan, which will be open to victims' family members on Sept. 11, 2011, and unveiled to the public one day later.

The memorial plaza sits on eight of the 16 acres that comprise the redeveloped World Trade Center site, and consists of twin memorial reflecting pools in the footprints of the original twin towers, around which are inscribed the 2,982 names of the people who died in the attacks on Sept. 11, 2001 and on Feb. 26, 1993.

Rather than arrange the names alphabetically, they are arranged by what organizers call "meaningful adjacencies," so that, for instance, all the first responders are grouped together, those that died in World Trade Center North are grouped together and those that were on Flight 11 are together. Friends and family of the victims could also request that names be placed next to one another that had particular meaning or significance to them.

There will be kiosks where visitors can go to search for names and their placement on the memorial by name, company, flight, tower or even hometown.

The rest of the plaza consists of more than 150 trees, all of which are oak, except for one, a Callory Pear tree, also known as the "survivor tree." It was at the World Trade Center on Sept. 11 and the Parks Department rescued it from the rubble. It had been reduced to a stump, but has since sprouted new branches.

At the center of the plaza lies the Memorial Museum, which is slated to open in 2012.

To visit the site, guests have to reserve a visitor pass online at 911memorial.org. Passes are free and can be reserved as far as six months in advance. There are daily limits, which is why The National September 11 Memorial & Museum at the World Trade Center Foundation, Inc. recommends reserving online. The entrance to the site will be at Greenwich and Liberty Streets. When it opens, the memorial will still be surrounded on all four sides by construction. Hard hats not required.

U.S. urges travelers to be vigilant in aftermath of bin Laden death