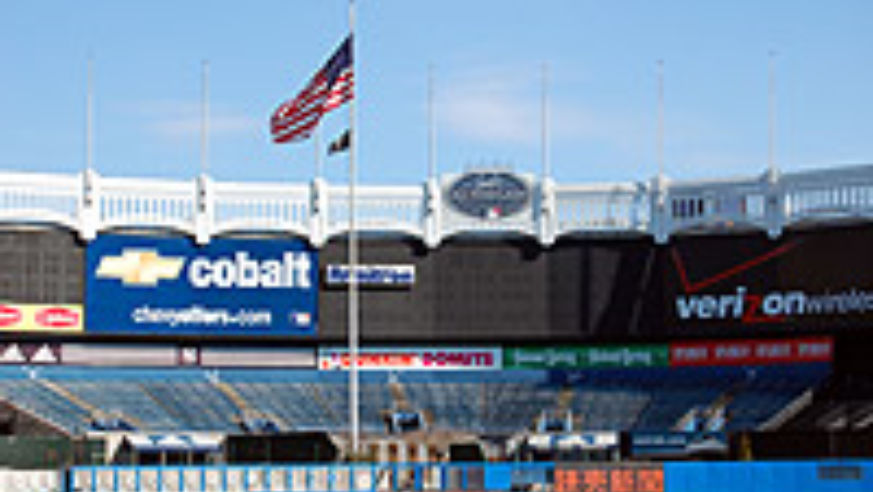 View photos from a tour of Yankee Stadium, including a sneak peek at the new stadium taking shape across the street.

If baseball is a religion, then Yankee Stadium is its grand cathedral. In its 85 years of existence, "The House That Ruth Built" has played host to some of the greatest moments in baseball history—as well as the greatest players.

But with its destruction imminent, and a new stadium slated to open in 2009, now is your last chance to take in the history of baseball's grand old lady. As game tickets are hard to come by, there's no better way to do so than to take the Yankee Stadium tour.

Check out my slide show and read all about my tour of Yankee Stadium after the jump.

I discovered the benefits of attending ballpark tours as opposed to actual games last year when my wife and I visited Seattle. The Safeco Field tour was much shorter than a game (45 minutes vs. three-plus hours) and easier to schedule (10 a.m. vs. 7:30 p.m.). The tour also granted us access to areas a casual fan would never see. And it was a huge bonus not having to sacrifice a night of our trip for two teams we couldn't care less about.

Back home, I told my wife that as a lifelong Yankees fan, I had to tour Yankee Stadium before it was destroyed. Recently, I was fortunate enough to make the trip to the Bronx.

The Classic Tour begins at the Yankee Stadium press gate. Your guide will lead you up the winding ramps to the Press Box, where you can sit in the same seats as the reporters who cover the game. You get a firsthand look at how a sportswriter sees the game.

From there, it's down an elevator to the Yankees' clubhouse, where the players dress, eat, shower, and work out. No photography is allowed in this inner sanctum, but there's plenty to see. Lockers line the walls, and above each is a replica of the famed Yankee Stadium frieze. If you look closely in the back left of the room, you'll see the locker of beloved team captain Thurman Munson—untouched since his tragic death in a plane crash in 1979.

Next you'll head to the field level for a chance to sit in the dugout. You can see what every major league ballplayer sees when he's not out on the field. You'll also see why most of these players lean against the railing during games rather than sit down. It turns out the view from the bench isn't all that good!

You'll then walk along the outskirts of the field (be sure to stay off the grass!) to left field and Monument Park—the most famous location within Yankee Stadium. It's a shrine to all of the legendary players who have donned the pinstripes over the years. You'll find monuments to Hall of Fame players like Babe Ruth, Lou Gehrig, and Mickey Mantle, as well as plaques for non-players, like the one for long-time stadium PA announcer Bob Sheppard.

Depending on the season, there are more than half a dozen tour guides. If you're lucky, though, you'll get Tony Morante. Not only is he the head honcho of the tour department, but he's also been a Yankee employee for fifty years, so you know he's got his share of really good stories!

The Yankees haven't officially announced an end date for the tours, as they haven't even finalized when the old stadium will be destroyed. They're still in the midst of planning special events to commemorate the end of an era, including a Papal Mass on April 20 and the hosting of the Major League Baseball All-Star Game on July 15.

MORE INFO Yankee Stadium tours are held most days except on weekends when the Yankees are home and weekdays when the Yankees have a home day game. Through March 16, 2008, prices are $15 for adults and $8 for children (14 and under) and seniors (60 and over). The tours end then, and resume on April 8, with prices rising to $20 for adults and $15 for children and seniors. For full details, visit the official site of the New York Yankees.