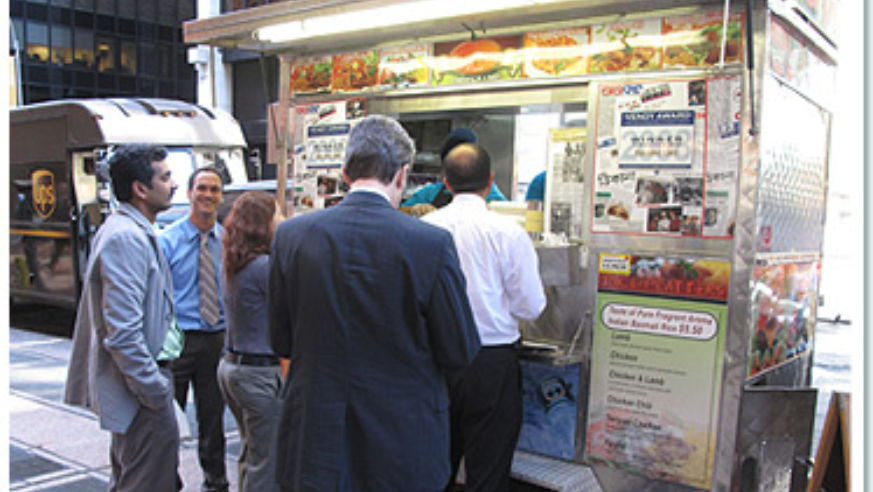 ROCKEFELLER CENTER
Korean: Bapcha (formerly Bulgogi & Kimchi)
John Lee's 6-year-old cart got a makeover this summer: a new name, a modern look, and, many say, a more inspired take on his dad's Korean recipes. The food is complex and exciting without overwhelming the uninitiated. Deeply seasoned meats like a slightly sweet beef galbi (grilled short rib), a tender barbecued beef bulgogi (sliced and sautéed) and dak galbi (spicy grilled chicken) are ladled over sticky rice, with a salad of scallions, onions, peppers, carrots, and cold cellophane noodles ($8)—or, at the adjacent sister cart manned by Lee's cousin, over your choice of brothy noodles ($5–$9). Ask for extras like soy sauce, hot sauce, and kimchi ($1), which is fresh and crisp with a bite that doesn't kill your taste buds. 49th St. between 6th and 7th Aves.

EMPIRE STATE BUILDING
Middle Eastern: Rafiqi's
Fans rely on the multicart chain for "clean meat, clean counter," according to the three guys working this particularly popular Rafiqi's cart—which feeds hundreds daily. The chicken and lamb, combo or separate, over rice ($5) or stuffed in a pita ($4), keep the crowds pleased. Both meats are tender, highly spiced, steaming-hot off the griddle, and served with hot sauce and a sophisticated white sauce (a little mayo, a little tzatziki, and vinegar). The warmed, doughy pita soaks up all the juices, and an untraditional bar of raw peppers, onions, black olives, corn, and shredded cheese jazzes up that typically sad side salad. Broadway between 31st and 32nd Sts.

GROUND ZERO
Trinidadian: Shirley's
The laid-back and likable Shirley has been dishing out her home cooking for many years—first at a storefront called Trinidad and Roti, and, since 1995, in her very busy Financial District cart. The best recipes from her native Trinidad include a rich chicken curry: three pieces of juicy, bone-in dark meat slow-cooked in a mild orange curry, with steamed cabbage (or carrots or yams) on a bed of rice and peas. The beef roti wraps tender boneless beef, potatoes, split peas, and chickpeas in a not-too-greasy flatbread that absorbs the stew without falling apart. You'll most likely need hot sauce, since Shirley is light on the spice, and don't be shy about requesting extra gravy on your rice (small $6, large $8). Whitehall St. between Bridge and Pearl Sts., 646/436-9974 (no name out front).

TIMES SQUARE
Indian: Biryani Cart
Although cart competition is fierce in Times Square, Meru Sikder, a former banquet chef for a New Jersey Hilton, recently added a second, adjacent cart to feed the hundreds who line up for his 2009 Vendy Award winning food. The kati (like an Indian taco with a chapati wrap) are superb—try the King Koti Roll (a spicy chicken tikka marinated in yogurt and spices) or the sweet/spicy Chennai roll (tandoori chicken in a Thai-style chili sauce). The Chicken Biryani has many layers of flavor: chunks of soft meat over basmati rice are dusted with spices, doused with real raita and hot sauce, and paired with mango pickle, egg korma, and shredded salad (two kati for $6, biryani $6). 6th Ave. and 46th St.

GRAND CENTRAL TERMINAL
Eclectic American: Magdy's
Magdy's appeals to a more American palate with its well-known Philly cheesesteak: slightly greasy, very tasty shredded beef covered in melted American cheese on a hard roll ($4). But the real winner here is what Magdy—a former restaurant cook who has been in this same spot for 15 years—calls "chicken scampi over rice." It's a fresh take on the common street-cart dish of chicken over rice that is often Indian- or Middle Eastern-spiced. The bite-size pieces of white meat chicken are simply coated in salt, garlic, and black pepper, and perfectly grilled. It comes with saffron rice, fresh tomatoes, sweet sautéed onions, and just the right amount of red and white sauces. Service is speedy, so don't be put off by the typical lunchtime lines. Magdy's wife, Jennifer (who quit her job as a schoolteacher to help), takes your order and money while you wait, and two extra grill guys bag and prep. 46th St. and Park Ave.

WASHINGTON SQUARE PARK
South Indian: N.Y. Dosas
Even nonvegetarians line up for Thiru Kumar's Vendy Award winning South Indian crepes. The best is arguably the Pondicherry, a delicate, flaky lentil-and-rice-flour pancake loosely wrapped around curry potatoes, crunchy lettuce, and finely chopped vegetables, accented by coconut chutney and served with a side of spicy sambar. It's insanely tasty for something so healthy, and so cheap ($6). Kumar, who is somewhat of a neighborhood hero, is so friendly and enthusiastic about his food that he's even been known to give it away, occasionally throwing in a side dish or an entire meal. Bypass the dosa line by quick-ordering an appetizer like the crispy delicious drumstick (soy protein on a sugarcane stick, dipped in chili garlic sauce) at the side window. W. 4th St. at Sullivan St.

CARNEGIE HALL
Greek/American: Carnegie John's
The modestly charming chef John has been in this spot next to Carnegie Hall for 12 years, and his one-man cart is so busy with regulars that he often runs out of the coveted chicken over rice. His chicken is amazing—a simple, marinated breast griddled and then grilled to order and delivered with a tzatziki that's thick with cucumber and not from a squirt bottle. The rest of the menu is similarly impressive because the quality meat is not drowned in sauce or spice and John has mastered the grill/griddle technique. The champion cheeseburger goes from griddle to grill and then back to the griddle for a charred, juicy patty that's then covered in thick slices of American cheese and a bun that's been griddle-toasted on both sides. It's the best $4 burger in Midtown.56th St. and 7th Ave.

MoMA
Jamaican: The Jamaican Dutchy
O'Neil, the cart's cook, makes a hearty curry goat that's long-stewed with terrific, subtle curry flavor. His herb-rubbed jerk chicken is the real thing—incredibly moist dark-meat chicken falling off the bone with heat that you feel in the back of your throat. Everything is served with steamed cabbage, naturally sweet fried plantains, and rice and peas (or dumplings). Don't miss the specials posted out front. Also of note: Stew peas are most certainly not vegetarian (rather, they're stewed beef and pigs' tails, bones and all!), and O'Neil and his sidekicks are on island time, so be patient (meals $8–$12). 51st St. between 6th and 7th Aves., twitter.com/Jamaicandutchy.

Video: How to get Broadway tickets for less.