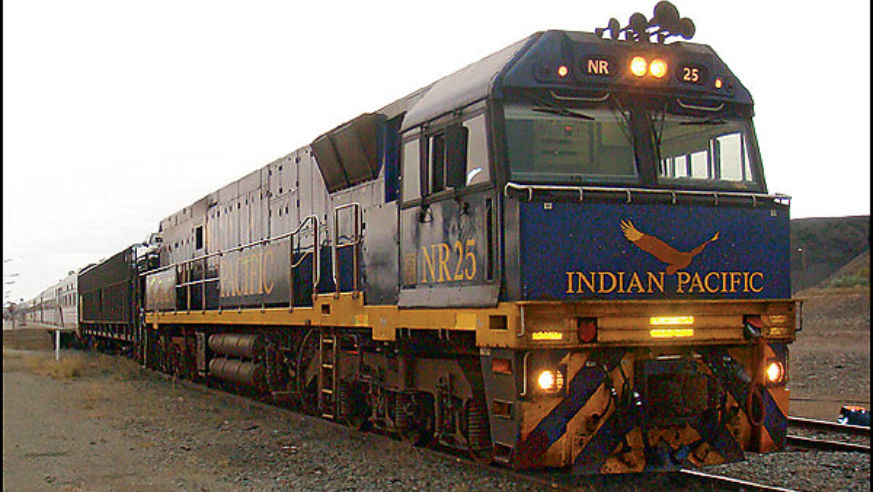 A trip on Australia's Indian Pacific is on every train buff's life list. Rey Kirkman of Salem, Ore., took copious notes, so you'll know exactly what to expect.

For many years, I looked forward to riding the Indian Pacific across the length of southern Australia, from Sydney to Perth. At 2,700 miles, it's one of the world's longest train trips. But when I searched for concrete information on what to expect, I found it hard to locate. Now that I've made the journey, here's the information I wish I'd had.

BASICS Great Southern Rail has operated the Indian Pacific since the rail line was privatized in late 1997. It's a three-day, three-night journey that leaves twice weekly in both directions between Perth and Sydney. Most travelers say that going from Sydney to Perth—as I did—works best because you're assured of seeing the famous Blue Mountains in daylight.

ITINERARY After winding through Sydney's suburbs, you gradually climb through the Blue Mountains, crossing the highest point near sunset. The scenery then changes to ranchland; by mid-afternoon you arrive in Adelaide, a seaside city that feels more like Omaha than Sydney. After Adelaide, you're really in the Outback. Built to accommodate railroad workers, the little towns along the way have no outside access except by rail. (Most of the houses are now empty.) The one major stop is at Cook, where the train is serviced. This marks the beginning of the Nullarbor Plain. Plenty of kangaroos live out in the low grasses, but they're usually seen only at dusk and dawn. (We never saw any—perhaps the train scares them off.) The third evening is in Kalgoorlie-Boulder, an active open-pit mining town; unfortunately, you arrive after the stores close. The final morning, the train descends into Perth, a beautiful portion of the trip. The scenery is similar to California's Central Valley, complete with live oaks.

THE TRAIN The quarter-mile-long train has 15 carriage cars, which were built about 1970 under license from the Budd Company, an American manufacturer. They're the familiar fluted, stainless-steel cars of America's streamliner period, and they're well maintained, constantly refurbished, and clean. Unlike traditional streamliners, these trains have no dome cars or rear observation cars.

TICKETS The cost of a double cabin in Gold Kangaroo class is about $1,779 per person (single cabins are also available); in Red Kangaroo class, it's $1,223 per person, while a Red Kangaroo coach seat is $639. Only Australians are eligible for senior discounts, and I found no advance or last-minute discounts. You can book via gsr.com.au.

GOLD KANGAROO CLASS Most Americans travel in Gold class. Double cabins are a tiny 5 x 7 feet, which is smaller than a comparable Amtrak cabin. There's a thin closet for hanging garments but no room for carry-on bags of the size that fit in aircraft overhead bins. Couples should share a single collapsible bag that can be stored beneath the lone bench seat. Each double Gold-class cabin has a shower stall and a toilet. But these trains don't use rocket toilets like the ones on Amtrak and planes. Rather, the toilets rely on gravity for draining. Picture a shallow toilet or washbasin that folds out from the wall; "flushing" occurs when you fold the toilet or basin up. Meals are included in the Gold-class fare.

RED KANGAROO CLASS A sleeper cabin in Red Kangaroo class is about the same size as a single cabin in Gold, and passengers share a toilet and shower facility at the end of the car. Food and all beverages cost extra. It's also possible to book a Red Kangaroo coach seat: All seats are assigned; they recline and are two abreast. Passengers in these seats share the Red-class bathroom facilities.

ELECTRICITY Each cabin has a 220-volt outlet and a 110-volt outlet (designated for shaver use, the latter can also recharge camera or computer batteries). Because of power surges, Southern Rail recommends passengers run their delicate electronics on battery power. Hairdryers are available for a $5 refundable deposit.

SLEEPING People tend to imagine that the lull of the rails and a gentle rocking motion will make sleeping on a train comfortable. The reality is that the roadbed isn't always smooth and the train wheels "hunt" back and forth on the rails, so the train bounces as it goes. Train sleep is punctuated by little jarring bumps all night long.

BAGGAGE Checked luggage is strictly limited to two bags per passenger that weigh no more than 44 pounds each.

STAFF Each car is serviced by a cabin attendant who doubles as a server at meals. I estimated the ratio to be about one staff member for every 25 passengers. Consequently, staff members are always rather busy and not readily available.

DINING The Gold and Red classes each have dedicated dining cars, and passengers are required to use the lounge and dining cars of their class. The Red-class dining is basic microwaved fast food, served buffet style. You can bring your own food aboard in Red class, but the only take-out food available along the way is in Adelaide and Kalgoorlie-Boulder. The Red dining car is an austere monument to Formica and linoleum. Gold dining is a cut above Red, but by no means achieves the level of the best of Amtrak. Qantas Airways caters the train, and Gold food quality is about what one might expect in Qantas's business class. Portions are small: Dinner is an appetizer course of soup or a tiny continental-style garnish "salad," followed by one of four entrées—fowl, fish, meat, or vegetarian—that rarely come with side dishes. Breakfasts in Gold class are disappointing: an uninspired fruit plate or a "cooked breakfast" akin to something you'd get at a McDonald's. The train has no room service; between mealtimes, a limited assortment of junk-food snacks is available in the lounge cars.

BEVERAGES Tea and instant coffee are complimentary in Gold class. Wine and spirits are obtainable in the Gold lounge car, but they're not included in your fare. The wine selection is solely Australian and is reasonably priced.