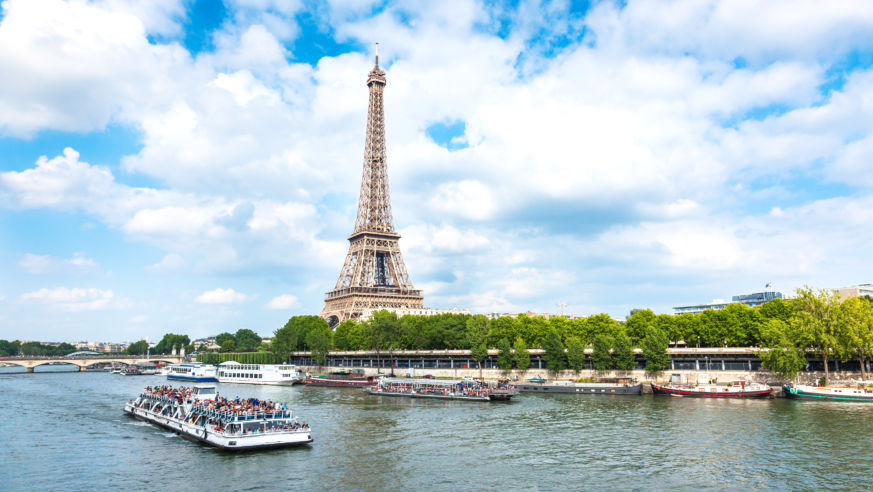 Does a cruise on the River Seine sound good right now? Enter to win an eight-day Avalon “Paris to Normandy’s Landing Beaches” cruise for two in a Panorama Suite, including all meals, port excursions, and airfare vouchers!

The best way to see Europe this year just might be a leisurely river cruise down the continent's most storied waterways, where the crew will serve up amazing food and wine, fascinating tours of beautiful cities, and the opportunity to pack an awesome variety of sights into one extraordinary week.

There's a good reason why we chose European river cruising as the cover story for Budget Travel's March/April 2015 "Dream Trips" issue. A vacation odyssey on one of Europe's great rivers is like cruising in a floating B&B. You'll savor distinctive local cuisine and the fruits of the continent's vineyards, make daily stops for guided tours (or alone time!) in gorgeous, historic cities, and appreciate the warmth and expertise of a crew that loves introducing travelers to some of Europe's most desirable destinations. Ready to get started?

There's a reason the world's most famous waltz is named for this dazzling river-music and history come alive as you pass through some of Europe's most beautiful towns.

Why it's a dream trip: Say the word Danube. Do you hear music? Maybe that's because the river's namesake waltz, Johann Strauss's "On the Beautiful Blue Danube," is as famous as the river itself. Or maybe it's because a cruise on this historic waterway (which stretches more than 1,700 miles from Germany's Black Forest to the Black Sea) can take you to two European music capitals, Vienna and Salzburg, and send your spirits dancing like one of Vienna's stately Lipizzaner horses. You'll drink in Central and Eastern Europe's dramatic landscape and history on one of the many popular Danube cruises. Depending on which cruise you book, stops along the way may include Germany's storybook cities such as Passau and Nuremburg, Budapest, Hungary (with its iconic Castle Hill, Buda Castle, and Chain Bridge), and Austrian locales like Vienna (where you can see the Lipizzaner horses in action, as well as visit the Hapsburg Palace and sample one of the city's irresistible tortes), Melk's 1,000-year-old Benedictine monastery, and the music-mad city of Salzburg (home to Europe's biggest music festival, and where Wolfgang Amadeus Mozart was born and The Sound of Music was filmed).

Make it happen: You'll find the Danube on the itineraries of several major river cruise lines, and Viking (vikingrivercruises.com) and Avalon (avalonwaterways.com) make it possible to cruise a portion of the river for a week, making stops for guided tours and day trips, starting from under $2,000 per person.

Insider tip: Longer, more ambitious Danube cruises (as well as cruises on other iconic European rivers) are available from Viking and Avalon, as well as from Scenic Cruises (sceniccruises.com) and Emerald Waterways (emeraldwaterways.com) for those who want to see as many of its 1,700-plus miles as they can!

See the real-life forests and castles that inspired fairy tales (not to mention Disney movies) along a river that's been mythologized for centuries.

Why it's a dream trip: You can sail from the Netherlands to Switzerland, passing through ancient cities, forests, and castles that transport you to another place in time. When your Rhine cruise starts in Amsterdam, as many do, you can immerse yourself in gorgeous colors (both natural and man-made) with flower-field panoramas and the exceptional art collections at the Rijksmuseum (known for its Rembrandts, Vermeers, and more) and the Van Gogh Museum, each of which has undergone a major renovation in recent years. The Anne Frank House is a touching reminder of Europe's troubled past, and the Oude Kerk is one of the classiest churches you'll see on the continent. Sail along the "middle Rhine," where you can ogle riverside vineyards, the forests that inspired tales such as Hansel and Gretel and Rumpelstiltskin, and mind-blowing castles that teeter on precipices over the water. Spend some time getting to know the castles and cathedrals of smaller German and French cities such as Cologne, Heidelberg, and Strasbourg before arriving in Basel, Switzerland, for a visit to the incredible Fondation Beyeler art collection and day trips to the Alps.

Make it happen: The Rhine is a staple of the European river cruise business, and you can find cruises starting from under $2,000 that will take you from Amsterdam to Basel over the course of a week, including guided tours.

Insider tip: If you're planning to visit in the spring, ask whether your trip will coincide with Amsterdam's eye-popping Tulip Time.

From the City of Light through Claude Monet's favorite natural setting to the historic beaches of Normandy, a cruise on this river packs an emotional wallop.

Why it's a dream trip: Frankly, a cruise on the Seine, typically beginning and ending in Paris, is one way Budget Travelers can stand in solidarity with the people of the city in the wake of this winter's terrorist attacks. Now more than ever, we echo Audrey Hepburn's famous line in Sabrina: "Paris is always a good idea." As seen from the water (whether you're on a multicity river cruise or one of the many local river tours available) the City of Light is perhaps more beautiful than ever, with its many bridges, the peerless façade of Notre Dame beckoning from shore, and of course must-see museums such as the Louvre, Musée d'Orsay, Musée de Cluny, and Musée Picasso, and that well-known tower (once derided as an eyesore!). But wait till you sail out of Paris on your way to Monet's garden at Giverny, where, surrounded by the flowers and botanicals depicted in Monet's paintings (water lilies, anyone?), you'll feel as if you've literally stepped into an Impressionist painting. Spend some time in charming towns such as Rouen (don't miss its half-timbered houses and distinctive astronomical clock!), Conflans, and Les Andelys, and then sail on to the beaches of Normandy on the English Channel, where the largest fleet in history made its historic landing on June 6, 1944, turning the tide of WWII. A stop at the American Cemetery is a moving reminder of the sacrifices made here just over 70 years ago.

Make it happen: A Seine cruise, offered by all the major river cruise lines, will often make a round trip, taking you from Paris to Normandy and back (making different stops on the return leg), and a weeklong cruise with guided tours will start at under $2,000.

Insider tip: When you're on your own in Paris, you can get closer to some riverside sights by hopping on a local boat tour. Ask your cruise director for recommendations.

Why it's a dream trip: A stunning natural setting, inspiring art, and some of the world's finest wines! The walled city of Avignon has been protecting staggeringly beautiful works of art and architecture since the 14th century, when it was home to series of popes. Don't miss the Palais des Papes and the incredible interior of Chapelle St.-Jean. Your boat will then wind its way to Arles, perhaps best known as the site of some of Van Gogh's most famous landscape paintings, but also home to the ultra-contemporary architecture of the Fondation Vincent Van Gogh building and the ultra-ancient (and well-preserved) Roman theater and amphitheater. You'll stop in Lyons, where the meticulously restored old city ("Vieux Lyons") beckons with winding streets, antique shops, tempting charcuterie (cured meats) and selfie-worthy covered passageways known as traboules. Ready to wet your whistle? You'll cruise through wine country, which can include a Burgundy wine tour and tasting before heading back to Avignon.

Make it happen: Round-trip cruises on the Rhône out of Avignon are a little pricier than other weeklong river cruises, but you can still pack in several days of guided tours starting from just under $2,000.

Insider tip: Instead of loading up on French wine to bring home, have it delivered instead. You'll save yourself a hassle and save the wine from unpredictable temperature changes that can destroy its flavor.

From Berlin's museums and awesome monuments to Prague's architectural wonders, this lesser-known cruise option is a true odyssey across centuries of European history.

Why it's a dream trip: Stand in front of Berlin's Brandenburg Gate and pinch yourself: Once the epicenter of Cold War tensions, the majestic monument now stands as a proud symbol of the new Berlin. The city is welcoming visitors, including families, like never before, with bicycle-friendly streets, cutting-edge cuisine, and many museums, including the Gemaldgalerie am Kulturforum, reward visitors with boastworthy works of art your friends haven't seen yet. On your cruise, you may stop in Potsdam (where Frederick the Great's Sanssouci is said to have been built to rival Versailles) and Dresden (with its amazing Zwinger Palace, which includes a major museum featuring Old Master paintings). Then it's on to Prague, whose beauty and imaginative architecture often surprise the first-time visitor: In fact, many Budget Travelers report back that the city's historic Charles Bridge, Prague Castle, St. Vitus Cathedral, and Old Town Square were their very favorite sights in Europe!

Make it happen: Elbe cruises tend to be a little longer and more expensive than those of the better-known European rivers, but a 10-day cruise with guided tours (and bragging rights when you get home!) can be found for around $2,600.

Insider tip: You'll see more of Berlin on a bicycle! It's one of the world's most cycle-friendly cities, with wide bike paths that are off-limits to cars and pedestrians.