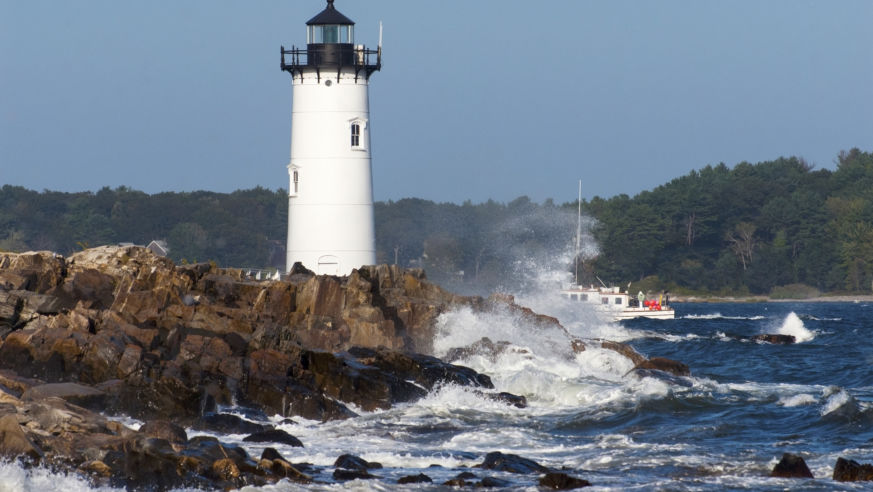 Charming Portsmouth, NH, is an easy weekend escape from most points in New England.

From the New England coast to the Wild West, it’s not too late to book one of these easy, unexpected getaways for your holiday weekend.

Memorial Day weekend (May 25 - 27) serves as the unofficial start of summer. Never mind that the holiday is a few weeks in advance of the June 21 solstice and that many school-age kids face one more month of school. The three-day weekend still provides a taste of summer delights to come.

While many folks will spend the weekend grilling, shopping, or hitting up local hot spots, some will choose to hit the road. In fact, AAA predicts that nearly 42 million Americans plan to travel for Memorial Day 2019. Keeping in mind that the purpose of the holiday is to honor those who have given their lives in defense of the United States (its original designation was Decoration Day, dating back to the end of the Civil War, when Americans decorated the graves of those who had given what President Abraham Lincoln famously called "the last full measure of devotion" to their country), the Budget Travel editors have rounded up travel experiences that go well beyond the well-trod tourist path. Here, five exceptionally affordable getaways that are a relatively easy escape from urban areas and that also offer unique history, culture, and natural beauty—plus insider tips for getting the most out of your visit.

New England history and culture in a charming, walkable city

Why you’ll love it: Walking the brick sidewalks of Portsmouth, NH, can feel like stepping back into Colonial days, a fitting way to commemorate the holiday. As the third-oldest city in the U.S., the seaport certainly boasts ample history, from hands-on experiences at Strawberry Banke Museum to the Wentworth-Coolidge Mansion to waterside Prescott Park, and the charming North Church. Even some of the eateries here will, in addition to serving you tasty fare, surround you with New England history, including a repurposed ferry terminal that is now now the popular seafood restaurant Old Ferry Landing, and a 19th-century ships chandlery-turned-bistro, Black Trumpet.

Artisans and makers in the Hudson River Valley

Why you’ll love it: Whether you arrive in town via car or train, the sweeping views of the Hudson River will be your first glimpse of what Beacon has to offer. Before departing the waterfront for Main Street’s unique shops and food, you must experience the Dia:Beacon museum with its world-class collection of modern and contemporary art by masters such as painter/sculptor Frank Stella and "light-sculptor" Dan Flavin. Grab a pint at Hudson Valley Brewery before (or after) you make your way up the town’s main thoroughfare (Beacon’s Main Street literally ascends a gentle hill) to admire the work of local artists and “makers” who have transformed Beacon’s centuries-old manufacturing legacy into a decidedly chic, imaginative contemporary scene. No chain stores or outlets here, just one-of-a-kind and often surprising hand-crafted gifts and food, including the knitters at Loopy Mango boutique, the baking geniuses at Glazed Over Donuts, the mixologists at the Roundhouse, and an array of other shops and eateries. Keep an eye out for painter Rick Price’s murals on the exterior of the public library and both the exterior and interior of Tito Santana Taqueria (yum!). Beacon is also a stone’s throw (well, a short drive) from other Hudson River Valley hot spots such as Minnewaska State Park across the river in Ulster County, and the Franklin D. Roosevelt Presidential Library and Museum in Hyde Park. It's no wonder that Beacon earned the title "Coolest Small Town in America 2018."

Insider tip: Zora Dora Micro Batch’s low-key exterior on Main Street is the gateway to incredible handcrafted gourmet paletas (popsicles), offering an evolving array of flavors including a mind-blowingly delicious pineapple, sea salt, and red pepper paleta you must taste to believe. Zora Dora earned a spot on Budget Travel’s list of the best ice cream shops in the U.S.

Memorial Day weekend festivities: The Franklin D. Roosevelt Presidential Library and Museum, in nearby Hyde Park, will host commemorative events all weekend long, including an exhibition devoted to the 75th anniversary of the June 6, 1944, D-Day invasion.

Why it’s a bargain: Hotels in neighboring communities from $79; Airbnb for two in Beacon from $67.

A visit to Orange Beach (and its neighbor Gulf Shores) allows travelers to essentially enjoy two long weekends in one: The first vacation consists of the justly popular attractions that have been drawing Southerners here for generations, including the 30+ miles of Gulf of Mexico waterfront along the coast of what locals refer to as “Pleasure Island” with white-sand beaches, waterparks, zip lines, and fishing. The second vacation—which you can enjoy at exactly the same time—consists of a lesser-known and decidedly wilder side of the Gulf Coast, including the Backcountry Trail through Gulf State Park, 25 miles of trails ideal for cycling, running, or just strolling; and Graham Creek Nature Preserve in nearby Foley, boasting nearly 500 acres of habitat for kayaking or canoeing. And, this being the Gulf Coast, you’ll have access to fresh seafood favorites like shrimp and grits and a variety of platters that have kept travelers returning to Orange Beach and its neighboring communities for years.

Insider tip: Go beyond the beach with a half-hour drive west to Bon Secour National Wildlife Refuge for kayaking and canoeing amidst migratory songbirds and sea turtles, and sign up for one of the excellent educational guided tours. (Important: Locals gently remind you to pack insect repellent and sunscreen and sun-protective clothing to ensure a comfortable and safe adventure in Bon Secour.)

Memorial Day weekend festivities: Run in the Paradise Island 5K on May 26, hear country star Thomas Rhett at the Wharf Amphitheater on May 26, and “ooh” and “aah” at the fireworks at Sparks After Dark at the Wharf the evening of May 27.

A vibrant urban community in the midst of the Wild West

Why you’ll love it: While South Dakota is renowned for wild spaces such as Badlands National Park and Custer State Park and for jaw-dropping feats of monument carving at Mount Rushmore and Crazy Horse Monument, many U.S. travelers don’t realize that Rapid City, nicknamed the “Gateway to the Black Hills,” can serve not only as a home base for exploring those famous spots but also as a vibrant urban destination in its own right, home to a variety of live music venues and arts and cultural institutions and festivals. Spend some time on the charming town square, drop by The Journey Museum & Learning Center for interactive exhibits, the Dahl Arts Center for cultural exhibits and free “art adventures," and get up close and personal with Rapid City’s ancient past at APEX Gallery, on the campus of South Dakota School of Mining & Technology, with its fine collection of fossils and minerals. And, of course, you shouldn’t miss the aforementioned wild spaces and monuments, which can all be happily squeezed into your three-day weekend in Rapid City: Mount Rushmore is about a half-hour drive, Crazy Horse Monument is less than an hour, Custer State Park is about a half-hour, and Badlands is less than an hour.

Insider tip: Off the city’s main square, look for Art Alley, an informal community art gallery with cool murals devoted to the region’s history and culture.

Memorial Day weekend festivities: Visit the May 25 - 27 open house at the Crazy Horse Monument to honor veterans and those who gave their lives in defense of the U.S.

An easy escape from: Minneapolis (a 90-minute flight from under $300 round trip) or Chicago (a two-and-a-half-hour flight for under $350); Rapid City is not an easy driving distance from any major urban area.

A genuine fishing village that welcomes newbies like family

Why you’ll love it: Morro Bay is first and foremost an authentic seaside community on the central coast of California. While it’s been a popular vacation spot for central coast residents for generations, the town has managed not to evolve into what experienced travelers would diplomatically refer to as “a little touristy.” We’d love to encourage discerning weekenders from the Bay Area and Southern California (and beyond) to discover Morro Bay’s welcoming locals and under-the-radar delights while appreciating its authenticity. Morro Bay will happily accommodate a variety of travel tastes: Want to chill on a beach and do practically nothing? There’s a beach for that. Want to learn to surf? Lessons are available. How about exploring a gorgeous lesser-known state park, kayaking the town’s eponymous bay, or pedaling your family in a rented surrey around the charming downtown? Gear rentals are an easy walk from comfortable lodging such as the Landing at Morro Bay (with views of the bay and iconic Morro Rock from many rooms) and the super-fresh seafood at Tognazzini’s Dockside Restaurant (stop by the fish market behind the restaurant for Instagrammable tableaus).

Insider tip: The immensely delicious breakfast burritos at Frankie & Lola’s combine an old-timey diner aesthetic with Mexican chorizo and cheese and are so big they can serve as both an ample morning meal and a hearty snack or lunch whilst exploring the coast.

(All lodging estimates were accurate when we published this story, but as Memorial Day gets closer, hotel rates and Airbnb inventory will likely change.)