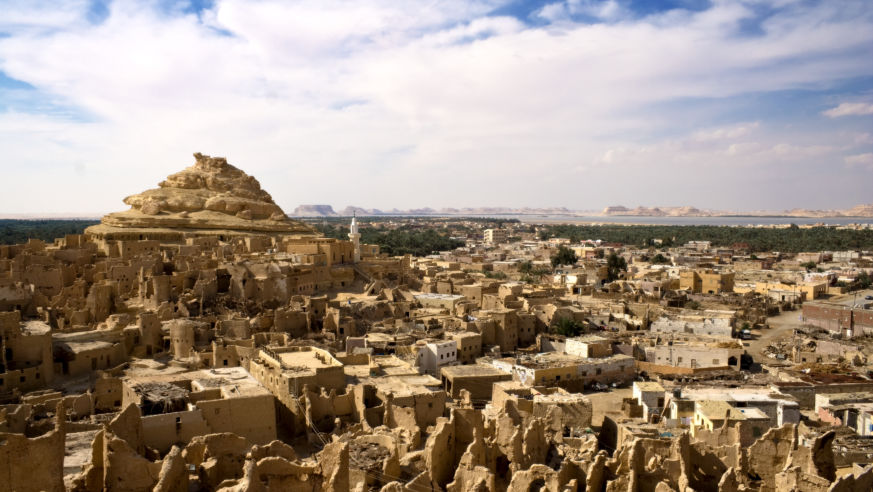 Some of the houses at the 13th-century ruins of Shali, near Siwa, are still inhabited

Everyone wants to know about the "next great places." But rather than simply make up a list, we turned to the people who explore for a living--for companies such as Starbucks, W Hotels, Trader Joe's, and Lonely Planet. Get ready for a serious case of wanderlust (not to mention job envy).

"There are white-sand beaches and warm tropical water," Decesare says in his surfer drawl. "And the people are super nice." While filming The Windsurfing Movie, due out in the spring, Decesare stayed at the Sab Sab Hotel. "We were spending 20 bucks a night each on a nice hotel!" he says. Sab Sab is conveniently located behind the Angulo Cabo Verde Windsurf Center. Run by one of the sport's world champions, Josh Angulo, the shop rents equipment and will arrange lessons. Round-trip flights from New York to Sal on TAP Portugal, via Lisbon, start at around $1,200. Sab Sab Hotel: 011-238/242-1300, sab_sab_reservations@hotmail.com from $88. Angulo Cabo Verde Windsurf Center: angulocaboverde.com, one-hour rental $19.

"The oasis of Siwa is the only place that's left me speechless," says Kenneth Hieber, who travels at least four times a year for 2Afrika, his tour company. An eight-hour drive west of Cairo, near the Libyan border, Siwa appears in the Sahara like a mirage. The town is built atop an enormous network of natural wells, which bubble out of the earth in the form of two huge lakes--Birket Siwa and Birket Zeitun--and countless hot springs. Siwa is best explored by bicycle; rentals cost $10 a day.

In addition to the ruins of Shali, a 13th-century mud-brick village, Hieber recommends a trip to Fatnis Island, in Lake Siwa. "It's covered with date palms, except for a round, tiled pool at its center. I took a swim just before sunset and then sat at a coffee shop watching the sun sink into the Libyan desert." Ten miles outside town is Adrère Amellal, a luxurious ecolodge constructed of sand and clay. But Hieber promises he'll make Siwa much more affordable, offering extensions to the town as part of his company's growing selection of Egypt itineraries. "I'll be selling stays from as little as $35 per person per night," he says. Adrère Amellal: 011-20/2738-1327, adrereamellal.net, $400. 2Afrika: 866/462-2374, 2afrika.com.

Over two weeks of correspondence with Cherri Briggs, founder of Explore Inc., a high-end agency for customized vacations to Africa, she contacted us alternately from Cameroon, Botswana, and Morocco. It was fairly typical for Briggs, who travels throughout the continent about nine months a year, seeking "authenticity" and "real African comfort away from the crowds," as she puts it. (Before getting into the travel business, Briggs started a film company and served on the boards of various nonprofits interested in conserving African wildlife.) During her recent stint in Cameroon, she explored the country's northwest highlands and met with several fons, or tribal chiefs--some of whom, she says, have 500 wives.

One of Briggs's favorite spots of late is Imlil, a friendly village in the Atlas Mountains, 50 miles southwest of Marrakech. The landscapes around Imlil are so magnificent, Martin Scorsese decided they'd be a fine substitute for Tibet in parts of his 1997 film Kundun. "Imlil has gorgeous mountain scenery--but at 5,000 feet, rather than 20,000," says Briggs. The lower altitude means you're much less likely to be hampered by altitude sickness. "You can hike, take overnight donkey trips, and stay at the ancient casbah," which is now a hotel called Kasbah du Toubkal that helps fund community projects. Kasbah du Toubkal: 011-33/5-49-05-01-35, kasbahdutoubkal.com, from $177.

"It's the most exotic place I've been," says Stacy Spivak, a buyer for Ten Thousand Villages, about the town of Agadez in Niger. On one of the old trading routes across the Sahara, Agadez was also once the seat of a Tuareg sultanate and dates back to the 11th century. It's still a main hub for the nomadic Tuareg people.

Ten Thousand Villages seeks out disadvantaged communities with unique skills, then sells their crafts internationally. Since 2001, stores in the U.S. have carried jewelry from the Agadez area. "It's mainly silver mixed with ebony, all made by hand," says Spivak.

She's also delighted by the architecture. "It's sort of like Timbuktu," Spivak says. "They use scaffolding made of branches, then build the adobe around it. The grand mosque, in the middle of town, has very intricate detailing; you can climb up to the windows and look out over the city." Spivak stays at a 13-room guesthouse, Auberge du Ténéré, now owned by an Italian expat. "It's an adobe room with an African canopy bed," she says. "Twigs hold up the mosquito netting." Auberge du Ténéré: 011-227/9659-8958, from $32. Round-trip airfare between New York City and Niamey, via Paris on Air France, costs about $2,000. Buses with and without A/C make the 12-hour trip to Agadez from Niamey: Corninche de Yantala bus station, 011-227/2072-3020, one way $27.