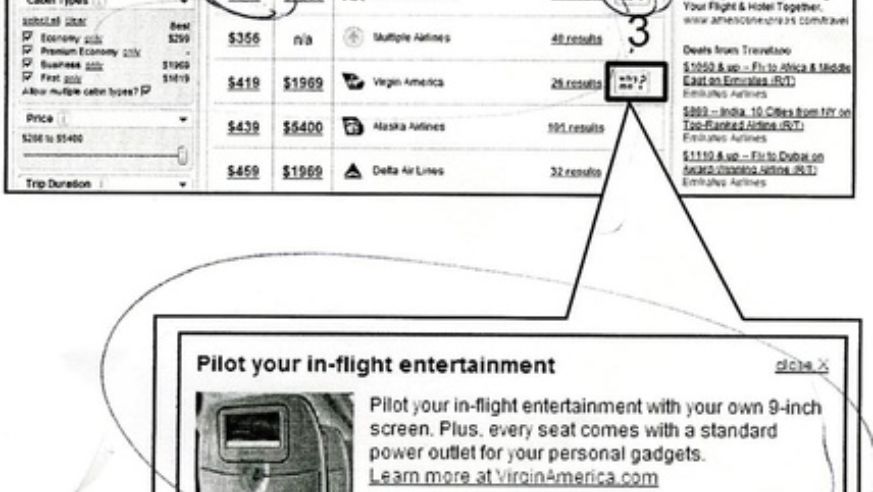 Here's an illustration of the pop-up window that you see when you click "Why Me?"

This post is only for people who are obsessed with getting the lowest airfares—or with under-the-radar, travel industry news.

Yesterday I sat down with the folks from Fly.com, a new metasearch airfare site from Travelzoo.

Fly.com offers comprehensive listings of domestic flights (except for Southwest) and for international flights that originate in the U.S.

You probably haven't heard of Fly.com because the site doesn't have a marketing budget yet. But you'll be hearing much more about the site after it gets out of beta testing shortly, which will happen before summertime.

The site already claims to have debuted a few firsts for fare search sites online.

• For a price, Fly.com invites airlines to add a "Why Me?" link that appears next to their fares in the search results. For example, say you search for plane tickets on Fly.com and the site produces a list of fares. If the results include fares from American Airlines, a "Why Me" link may appear next to the fare quote. Click on that link and a window opens explaining that American is different from other airlines in that it offers in-flight wireless Internet access on selected flights. Virgin America is another airline that is periodically adding the "Why Me?" box to its search results on Fly.com. The boxes will remind travelers that the airline offers added-value features such as its nifty in-flight entertainment system that includes instant-messaging with other passengers. This service is to help people who are not shopping solely on price to choose which airline is best for them on a given route. We've only seen the Why Me feature on a handful of highly competitive routes so far.

• Fly.com displays all cabin classes—economy, business, and first—in one integrated display. Unlike other metasearch sites, it doesn't have a drop-down menu for selecting whether you want to see economy, business, or first-class seats—you automatically get the lowest in economy and the lowest in premium classes at the top of the screen. The point is to allow travelers to spot when a business or first class seat (which the site puts under the single label of "premium" seats) are available at a price that isn't much higher than an economy class seat.

Says Brian Clark, senior vice president and general manager of search products for Travelzoo: "Users already are finding affordable business and first class fares that they otherwise would never have known about."

• Fly.com says it lists its fares in an unbiased rank order. There isn't pay for placement, though parent company Travelzoo will continue to accept money from travel companies for preferential placement in its famous "Top 20 deals on the Internet" e-newsletter.

What does Fly.com do for Travelzoo, its parent company, which is a world leader at identifying and publishing travel deals? Travelzoo execs hint that Fly.com will, in its first phase, be a supplement to Travelzoo's deals listings. Let's say you subscribe to the Top 20 deals on the Internet e-newsletter, and you see a great resort package for four-nights, all-inclusive at a four-star resort in Los Cabos. But let's imagine that have little idea how much it would cost to book plane tickets to take advantage of that deal. Well, Travelzoo will incorporate Fly.com search results, perhaps in a pop-up window, synchronizing with the specifics of the deal. In this example, if the Los Cabos resort deal is only available for April 14–19, then the box will show selected fares via Fly.com to Los Cabos for that date. The goal is to amplify not only the deals, but all travel options, and encourage people to book confirmed deals.

Travelzoo spent $1.8 million on the Fly.com URL, as TechCrunch has reported. The company could have launched the site on a different, free URL, such as travelzoo.com/flights instead. The logic behind purchasing the fly.com URL, says Clark, is that "fly" is a word that is frequently used by people searching for deals on search engines like Google and Yahoo and that it will naturally attract users over time. It's also proof that Travelzoo is committed to making Fly.com be a standalone product that competes directly with the Orbitzs and Kayakss of the world in fare search. Clark says that Fly.com plans to add hotel rate searches in due time.

One final point. Fly.com's team was less than pleased by my claim that their site's design looked like a copycat version of Kayak (see "Kayak responds to mimicry by…Fly.com). The company's position is that it doesn't feel it needs to reinvent the wheel [i.e. the overall look of the site] given that travelers have become familiar with a certain type of website design when it comes to travel searches. In the words of Clark, "Why break new ground when users are already attracted to a successful model? The goal is to innovate the user experience on top of a proven interface."

Clark adds: "We intend to prove we are as worthy or more worthy of customers in the airfare metasearch space. We've already debuted several industry firsts."

I had missed an insightful post on Fly.com by The Cranky Flier. He says, "They need to get more aggressive in promoting deals that are truly stellar and can’t be found elsewhere. Only then will people maybe consider coming to Fly.com to search, but even that is questionable."

Using Twitter to ask if Google will buy Expedia