Have you ever wondered if pilots actually sleep in the cockpit? Or whether airlines have adjusted their flight times strictly for the sake of a better record of on-time arrivals?

The answers to those questions would both be Yep, they sure do. And these insights come straight from the pilots' mouths in a worthwhile new Reader's Digest story, "50 Things Your Pilot Won't Tell You."

Among the juicier tidbits are indications that pilots often fly in less-than-safe conditions. For example:

"I'm constantly under pressure to carry less fuel than I'm comfortable with. Airlines are always looking at the bottom line, and you burn fuel carrying fuel. Sometimes if you carry just enough fuel and you hit thunderstorms or delays, then suddenly you're running out of gas and you have to go to an alternate airport." –Captain at a major airline

Sometimes, it's the pilots themselves making for a worrisome situation in the cockpit:

"Do pilots sleep in there? Definitely. Sometimes it's just a ten-minute catnap, but it happens." –John Greaves, airline accident lawyer and former airline captain, Los Angeles

Also, the idea that the airlines manipulate flight times is not just some crackpot conspiracy theory:

"No, it's not your imagination: Airlines really have adjusted their flight arrival times so they can have a better record of on-time arrivals. So they might say a flight takes two hours when it really takes an hour and 45 minutes." –AirTran Airways captain, Atlanta

There's some practical advice in the story as well, such as what every passenger should do to avoid germs while flying:

"Most people get sick after traveling not because of what they breathe but because of what they touch. Always assume that the tray table and the button to push the seat back have not been wiped down, though we do wipe down the lavatory." –Patrick Smith, commercial pilot and author, askthepilot.com

I consider it blasphemous to visit San Francisco without eating a burrito. The best taquerias in town are in the Mission District (near the 16th street and 24th street BART stations). But for out-of-towners, the giant menu on the wall behind the counter can be intimidating (even for avid Chipotle eaters!) I'll often see a local offering up advice to travelers while standing in line, so consider this my ultimate primer to all you future visitors to my city. When ordering, choose a meat (see below) or go vegetarian, then a type of bean (pinto, black, or refried), salsa (spicy or regular) and then decide to stay "regular" (meat, beans, rice, and salsa) or upgrade to the "super," which adds cheese, sour cream, and guacamole or slices of avocado. Seems simple, right? What usually confuses non-locals are the additional terms people throw out to customize their burrito&mdash;as in "Super, no sour cream" or "regular with cheese." But go ahead, try it! You'll feel like a local in no time. As a side note, the usual meat options are: carne asada (thinly sliced beef), pollo (chicken, either regular or grilled, which is called pollo asado), carnitas (chopped pork cooked in its own fat, seasoned to be sweet and spicy), al pastor (rotisserie-style pork), chile verde (pork or chicken cooked, stew-like, in a green salsa like stew) and chorizo (spicy Mexican sausage). And for the brave: lengua (beef tongue) and sesos (beef brains). And a warning to vegetarians and vegans&mdash;at most traditional Mexican taquerias, the rice and refried beans are almost always cooked in lard, a fact most local vegetarians tend to play ignorant about. Wash your burrito down with a cold drink, such as horchata (a divine milk-based drink with cinnamon). MORE ON SAN FRANCISCO Quiz: 12 Things You Didn't Know about San Francisco Cheap Eats: San Francisco's Best Street Food Getting Around: Decoding the New Clipper Pass

It's the 150th anniversary of the first London fish and chip shop, or "chippy." I tell you that in case you need an excuse to buy a plate of batter-fried fish and chunky golden French fries. Here are some spots worth checking out: Rock and Sole Plaice An excellent chippy that's convenient for visitors to London Near Covent Garden Piazza (with its shops and street performers), Rock and Sole Plaice has been praised for its consistent quality. Its broad selection of fish includes rock, sole, and plaice of course. You'll pay a premium because you're in SoHo: About &pound;9&ndash;11 a plate, or about $14 to $17. 45-47 Endell St. George's Portobello Fish Bar Jamie Oliver's favorite shop The celebrity chef once named this Notting Hill establishment as serving the city's best fried fish. It's well located for lunch after shopping in the city's top outdoor market on Portobello Road. Cod, skate, and haddock are served up with chips in a traditional British style. About 8 pounds, or about $13 a plate. 329 Portobello Rd. Fish Central The gourmet version of the classic dish Time Out London's pick for best fish and chips is Fish Central. Located in the City, or financial district, this upscale restaurant has a wine list that draws bankers from miles around. Cod and chips from &pound;9.60, or about $15. 149 Central St. Tip #1: Don't forget to add tartar sauce and vinegar. Tip #2: Save a few pounds by eating take-out, or "takeaway". The typical "chippy" charges a fee for eating in.** (typo corrected) Just want the fries? Check out Londonist's picks for top chip shops. MORE FROM BUDGET TRAVEL Check out our London coverage

Leave tomorrow: Airfares to Hawaii are down

Hotwire president Clem Bason was in the office this week (a perk of being a Budget Travel staffer is the chance to get insights from industry insiders), and he gave me a hot tip I thought I'd share with you wonderful folks: reconsider Hawaii. Prices are coming down. We've blogged before about how airfares to Hawaii are painfully high and seemingly never go on sale. But Bason shared that he's been noticing a lot of airfare sales lately&mdash;and when I looked, I found the same. Check out low fares from Alaska ($169 one-way from Seattle), United ($190 one-way from San Francisco), and Continental ($382 round-trip from L.A., as part of a larger sale). Even from the East Coast, prices are more affordable than I've seen in a long time. I did a Kayak search for early-December flights between NYC and Honolulu and found non-stop prices from $643 (United). Hotel rates are also coming down. I checked out Hotwire's Hawaii offerings and found a four-star hotel from $155, a three-in-a-half-star hotel from $96, and three-star hotels starting at $89 a night. Hotwire is an opaque search, meaning you don't see the name of the hotel until after you book; you simply see location, star rating, and price. But even on a non-opaque search, like over at hotels.com (a sister site of Hotwire), I found three and four-star hotels in the $120s and $130s (can you tell I'm starting to plan a trip of my own?) Another point about Hawaii: Because it's an island, rental cars can't be moved around to match demand like they are on the mainland. So when demand for rental cars goes down in Hawaii, operators cut rates drastically (often through mega-search sites like&mdash;you guessed it!&mdash;Hotwire) to fill up the cars they've got on the lot. Bottom line? Car rentals are getting cheaper, too. MORE ON HAWAII Answers to 5 Common Travel Questions Which Hawaii Is Right for You? Real Deals: Hawaii 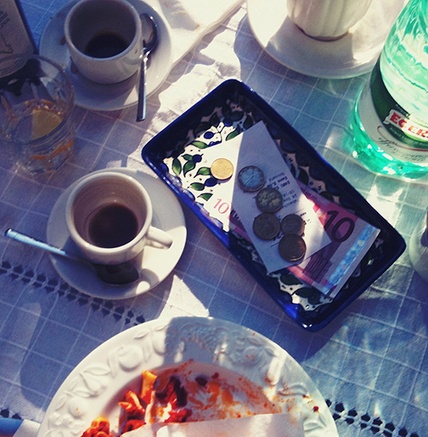 Italy: How to tip in 6 situations

Stressing over the bill is no way to end a fantastic meal at a Roman trattoria. You'll have a smoother experience interacting with locals in restaurants, taxis, and hotels if you're familiar with Italian etiquette. The most renowned book of manners, The Galateo, dates to the 16th century, but since they didn't have taxis back then, I consulted Sabrina Carollo's recent Galateo per tutte le occasioni (Etiquette for All Occasions) as a starting point. She recommends leaving a mancia (tip) for these customer-service professionals: theater ushers, porters, waiters, housekeeping staff, taxi drivers, and hairdressers. At restaurants, Carollo suggests adding at least 10 to 15 percent to the bill, but that strikes me as very generous by typical Italian standards. I took an informal poll of Italian friends on Facebook and most commented that they tip waiters less&mdash;between 5 to 10 percent&mdash;or they simply don't tip period. This is mainly because they say that they are already charged a coperto, which covers expenses like the price of bread, cleaning linens, oil and other condiments, plus a servizio fee. The servizio, which goes towards paying the waitstaff, is often not listed on the bill at all but rather already factored into the price of your meal. To investigate further, I called two of my favorite Roman restaurants: La Campana (011-39/06-687-5273, vicolo della Campana, 18) and La Taverna dei Fori Imperiali (011-39/066-798-643, via della Madonna dei Monti, 9) in Monti. I found that the servizio is actually not always included in the price of the meal and that some restaurant owners no longer charge a coperto. La Taverna dei Fori Imperiali, for example, said they do not charge either fee. Rather they charge for bread and leave tipping to "the discretion of their clients." My Italian father-in-law, an all-around classy guy, says he keeps in mind how elegant or casual the place is, the age of who is serving you and also whether you are being served by the business owner, waiter or a waiter-in training. He feels a 10 percent gratuity is a more-than-generous tip for any meal. "Sometimes the generosity of the tip may also depend on the cash I take around," my father-in-law adds. "Since in almost every restaurant in Italy, it is impossible to tip by credit card." In taxis, most Italians don't pay tips at all, unless they know the driver took you on the fastest route possible. In that case, if you are feeling generous, you just round the bill up and tell him to keep the change. There are no hard-and-fast rules, but here are my personal recommendations for what to tip in 6 scenarios. &bull; Pizzeria: &euro;1 for each person, unless you are alone, then leave &euro;2 or &euro;3 &bull; Restaurant: About 5 to 10 percent &bull; Taxi: Round the bill up, if you're feeling generous and the taxi driver took the short route &bull; Hairdresser: About 5 to 10 percent &bull; Hotel porters: &euro;1 to &euro;5 &bull; Bar: Maximum &euro;2 And remember that it is perfectly okay to abstain, if you are not happy with the service provided&mdash;waiters are paid a living wage, and the expectations for tipping are lower in Italy than in America. MORE ON ETIQUETTE A Guide to Tipping in 10 Countries (PDF) Menu Decoder: Translations of Italian Food Terms and Popular Dishes