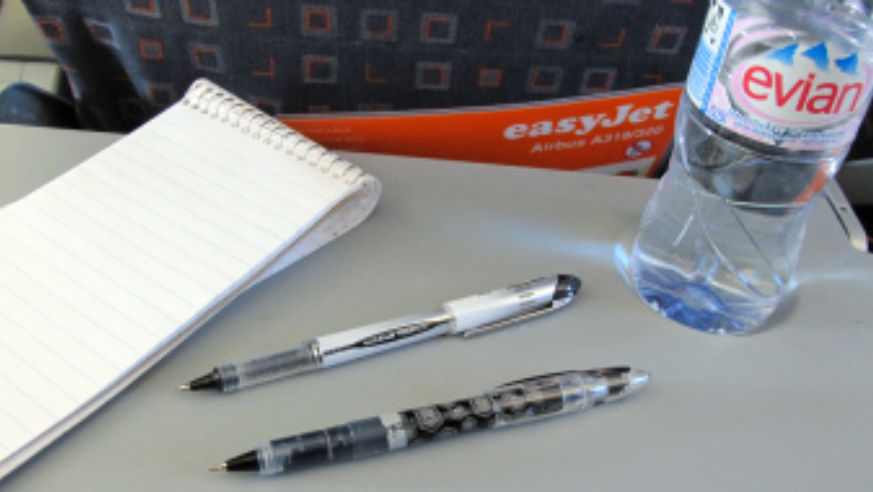 Pen makers like Fisher, Pilot, and Uniball have touted "airplane safe" technology for a decade. The technology has steadily improved over time. But is a pen that never leaks in flight worth its higher price?

You already know that rollerball pens work poorly under pressure—cabin pressure, that is. The typical rollerball may explode mid-flight, or malfunction after returning to earth.

What's less well known is that this problem is distinctive to rollerballs. Other types of pens—ballpoints and gels—are almost never affected by altitude changes the way rollerballs are. So the cheapest way to have a "airplane-safe" pen is to buy a ballpoint (like a Bic) or a gel pen (like a PIlot G2).

You remember ballpoints, of course. You probably chewed on the end of a ballpoint during the third-grade. They're still the best value in writing land. They're cheap (buy a dozen for about $4.50), and they last the longest (you could write a two-mile long line with a single Bic, for instance).

Gel pens are considered classier than ballpoints. After all, their design is relatively new and doesn't have grade-school connotations for most people. They're essentially a hybrid between ballpoints and rollerballs, a mix of oil-based ink and water-based ink.

But gel pens smudge. Oh, how they smudge! This is particularly a problem for travelers who like to send postcards. The most common postcard paper has a laminate-like glossy surface, and gel ink never dries properly on it. Write your postcard, and see your words blurred beyond recognition within an hour.

So: ballpoint pens are cheap and youthful, and gel pens are stylish yet smudge-prone. That leaves us with rollerballs—and their explosive habits.

Rollerballs are popular with frequent writers because their water-based ink soaks into paper more quickly than the ballpoint's oil-based ink. You don't have to press hard on the pen to get it to write, and the fineness of the line can be more easily controlled.

If you want a rollerball, you'll probably want one that's "airplane safe." I bought some of these best-selling models for testing on a recent flight.

Here are my quick conclusions:

Yes, the airplane-safe technology does work. I didn't have a single in-flight blow-ups—or even mild blottings—in my admittedly unscientific test of these pens.

One of the most widely sold "airplane safe" pens. It worked as promised at 30,000-feet.

Side notes: At about $3.75 each, it is somewhat pricey. In its defense, Sanford says its ink is of "archival" quality and is stable enough to prevent check fraud.

Worked in-flight as promised. Has a easy-to-hold rubber grip and a needle point.

Side notes: The nice thing about a retractable pen is that you can't lose the cap under your airplane seat. The bad thing is that they usually have metal mechanisms inside that may set off metal detectors. About $7 for a four-pack.

As far as airplanes go, it worked fine in my test.

Side notes: At about $8 each, it's expensive. Supposedly, it can work in space and at extreme temperatures, too.

Each traveler is fussy about pens in his or her own way. My comments point out some issues, but other fliers will have different preferences and experiences using the same pens. Feel free to share yours, below.

Disclaimer #1: I've generalized about types of pens and types of ink for simplicity's sake. There are some exceptions to what I've said. Go to pen connoisseur websites for the finer distinctions.

Disclaimer #2: Fountain pens may also act up under changes in cabin pressure. But who uses fountain pens anymore?

Disclaimer #3: I didn't like the Uni-Ball Vision Elite, despite its good performance and acceptable price. The forward portion of the pen, which includes the writing tip, tended to unscrew during use. Its manufacturer also sells retractable version, which doesn't come apart of its own accord. But that pen is even more expensive, at about $17 for a pack of 3. The lesson, which is worth repeating: Be sure to test a pen for your personal tastes.