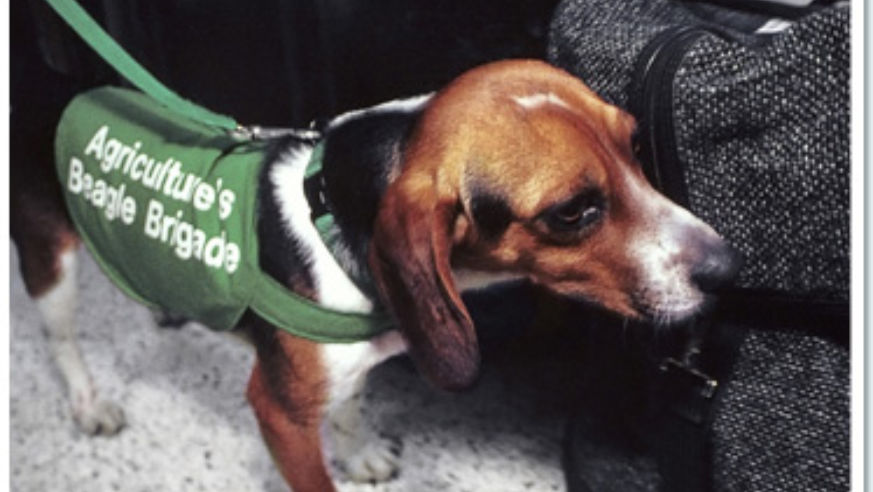 Man's best friend is the smuggler's worst enemy. Here's why it's unwise to try to sneak a little chorizo&mdash;or anything else&mdash;past Snoopy at the airport.

Some 1,300 dogs work for U.S. Customs and Border Protection. Just how good are they at sniffing out drugs, money, food, and other items not allowed entry into our country?

"The dog's nose is very sophisticated, thousands of times better than the human nose," says Clark Larson, director of the CBP's canine program. A CBP officer working with a dog can perform a full inspection of an incoming vehicle in about five minutes. An officer working alone might need 20 minutes to conduct even a cursory review—taking significantly longer to achieve a lot less.

Beagles and other dogs are hardwired to sniff out trouble. Larson uses beef stew as an example to explain the exquisite sensitivity of a dog's nose. Most people know what beef stew smells like. But a dog that's been trained to detect spices will immediately be able to sniff out the presence of the tiniest pinch of basil and differentiate it from oregano or other spices. "That's why even when smugglers pack marijuana in several layers of cellophane, surround it with onions in sealed packages, and then immerse it in tanks full of gasoline, the dogs are still able to sniff out the drugs," he says.

The dogs usually come into the CBP's possession by way of animal shelters and humane societies in the eastern and midwestern U.S. Most of the dogs are trained at the CBP center in El Paso, Tex., where they undergo a rigorous 10-week training—punctuated, of course, with many doggie treats. The dogs specialize in detecting either organic (fruits, meat, hidden animals) or some combination of currency, firearms, narcotics, and humans trying to sneak into the U.S. illegally. They're fast learners: Within two or three days of training, a dog knows the scents it's after. The rest of the training is devoted to fine-tuning its abilities and teaching it to pursue those smells anywhere. And yes, that means anywhere. The dogs go through exercise after exercise in which they're instructed to find banned items hidden inside suitcases, fanny packs, bicycle tires, baby sippy cups, car trunks, SpongeBob SquarePants backpacks, cowboy hats, or household objects like vases with hollowed-out bottoms, just to name a few.

The CBP uses several dog breeds, including beagles, golden retrievers, Labrador retrievers, German shepherds, and Belgian Malinois. So why is it that beagles are used so often at airports?

For one thing, because they're adorable. "Who doesn't love a beagle?" says Larson, describing the droopy-eared breed as "a massive nose on four little legs." Beagles are also lovers of food and are highly interested in other animals (their scents especially), making them the perfect foil for travelers toting banned meats, cheeses, and fruits, or prospective new pets like fish, birds, or snakes from abroad. Even when the offending item is stashed away in what appears to be an airtight container, the beagle's nose knows. Last fall at Chicago O'Hare airport, for example, a superstar CBP beagle named Shelby barked up a storm after sniffing the presence of live snails, which were sealed in plastic containers hidden inside a bag arriving on a flight from London.

So while you're at the airport petting or making googly eyes at the cute little pooch at your ankles, you can be sure it's busy sniffing out the mango at the bottom of the bag held by the woman behind you. Or the wheel of unpasteurized cheese you shouldn't have stowed in yours.