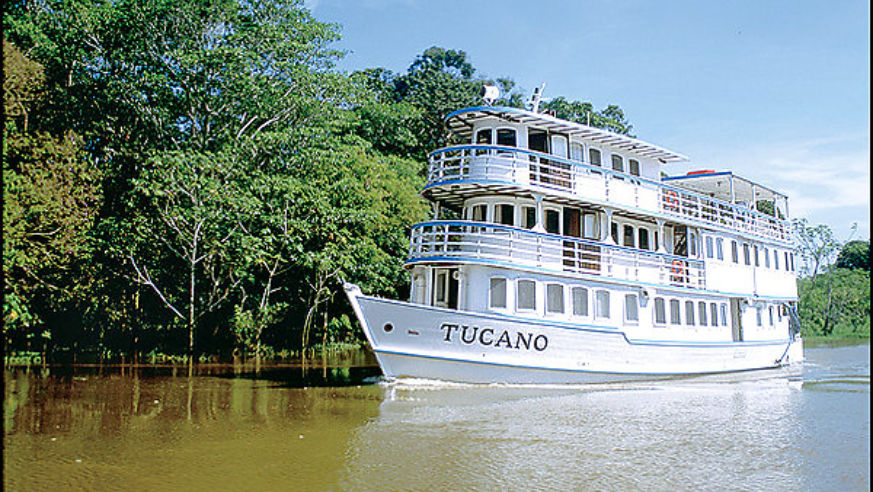 This is Mother Nature at her most primeval&mdash;jungle so lush that it's impenetrable in places, and animals you've only ever come across at a zoo. Whether you stay on land or cruise the river, you're going to see wildlife.

Stretching 2.3 million square miles across South America, the world's largest rain forest is home to more than a third of all known species, including a staggering 2.5 million different kinds of insects alone. But the Amazon river basin is under threat: The pace of logging and clearing land for agriculture has hastened considerably, creating a sense of urgency in travelers who want to see the forest before it's lost forever. These three options are a good start.

Tefé and Tabatinga
The main gateway to the Brazilian Amazon is the old rubber boomtown of Manaus (round-trip flights from Miami via Panama City cost about $700 on Copa Airlines). From Manaus, hop another flight to Tabatinga, near the border with Colombia and Peru, and drift back to the city on a riverboat. Most flights allow you to stop for several days in Tefé--a remote town near the Mamirauá nature reserve, where the Solimões and Japurá rivers converge. The park contains an abundance of wildlife, including egrets, herons, ospreys, and bitterns, as well as numerous monkey species. The Pousada Uacari lodge has been built on rafts floating on the water--the grunts of caimans are audible all night long. The minimum three-night stay costs $550 per person, with meals and wildlife trips included (011-55/97-3343-4160, uakarilodge.com.br).

The boat ride back to Manaus on the Solimões takes about three days. An upper-deck cabin with bunk beds is $320, meals included, on one of the privately operated boats that usually leave daily from the Tabatinga port. To enjoy the scenery, buy a hammock in town, string it up on the deck, and relax alongside the locals.

The Tucano
A more comfortable way to explore the Amazon basin is aboard Ecotour Expeditions' Tucano yacht. Run by English-speaking nature experts, the weeklong cruises on the Río Negro go to areas of untouched jungle that other cruise ships don't reach. The exact itinerary depends on the time of year, but all trips include a stop at a kind of forest called the igapó, which is routinely flooded by the river. The area is rich in fauna and flora, including orchids and bromeliads that dangle from tree limbs. Guides also lead tours through a denser part of the jungle where howler monkeys, anteaters, and sloths live.

The Tucano has only nine cabins, all of which have air-conditioning. The boat leaves Manaus twice a month on Sundays and costs $2,300 per person for a double-occupancy cabin; singles can team up with another solo traveler or pay a $920 supplement. The price includes meals and side trips (800/688-1822, naturetours.com).

Marajó Island
Marajó Island, an island the size of Switzerland in the mouth of the Amazon, is less than four hours by ferry from the Atlantic coast city of Belém (round-trip tickets from the Icoaraci port near Belém are less than $10).

The wildlife on the island is incredibly diverse, from parrots and marmosets to manatees and giant pirarucu fish in the river. The Hotel Ilha do Marajó in the town of Soure will organize wildlife outings by jeep or horseback ($50 for single, $62 for double occupancy per night, 011-55/91-4006-3850, iaraturismo.com.br). Another option is staying at a water-buffalo ranch, where you can watch cowboys at work and ride buffalo. The Fazenda Nossa Senhora do Carmo runs $97 per person per night, including meals and excursions (011-55/91-9166-1521).