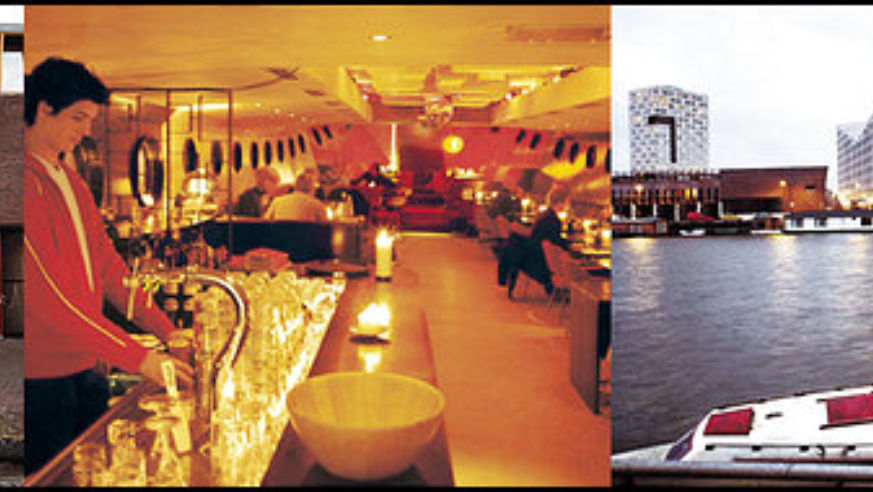 From left: A resident of Sporenburg; the bar at Odessa; De Walvis, an office building whose name means "The Whale"

Not too long ago, Amsterdam's Eastern Docklands was the turf of squatters, prostitutes, and drug dealers. Today, the loosely defined region also known as the New East, the New Amsterdam, or Eastern Islands has become more of a destination for modern-design junkies.

The area's man-made islands and peninsulas--named Java-eiland, KNSM-eiland, Sporenburg, Borneo-eiland, Veemarktterrein, Abattoirterrein, and the Oostelijke Handelskade--were constructed in the late 19th century and thrived up until the 1970s, when shipping was diverted to the west of the city. But in the late '80s, Amsterdam hatched an ambitious plan for the region, primarily in response to its chronic housing shortage. Consider it a success: In the past decade the Docklands has blossomed into what's now a colorful, densely built mishmash of gentrified warehouses, modern canal houses, and quirky, eye-catching bridges.

Each of the smaller islands and peninsulas has a unique character. For example, the Oostelijke Handelskade is filled with spruced-up warehouses. The narrow Java-eiland feels like a mini-Venice, with four waterways that transect it. And the KNSM-eiland features classic buildings with a twist:

One highlight includes a massive, rounded wrought-iron gate designed by Antwerp artist Narcisse Tordoir that's considered a triumph of public art. The gate scales the entire height of an eight-story building that resembles an Italian opera house in the island's Barcelona Square.

The best way to get a sense of the place is to take a tour. Rederij Lovers has two-and-a-half-hour architecture tours, via boat, which are currently only offered in English for groups over 20 and depart every Sunday afternoon. Alternately, Arttra and Bakker & Bakker both lead English-language walking tours for smaller groups. However, it's far cheaper--and more fun--to go off on your own: ARCAM, the Amsterdam Center for Architecture, sells a helpful map with noteworthy sites on it.

Architecture is definitely the main draw. Check out the Scheepstimmermanstraat (Shipwright Street) on Borneo-eiland. Nine years ago, 60 narrow plots of land were parceled out to buyers, each of whom was encouraged to use a different, innovative architect. Though each home is on the water, measures exactly the same width, and incorporates tall windows, the designs are remarkably varied. From afar they come off like a standing row of deconstructed dominoes. On the nearby Eastern Dock, be sure to visit the copper-clad NEMO National Center for Science and Technology, a museum that is a large-scale approximation of a ship's bow, and Muziekgebouw aan 't IJ, Amsterdam's newest concert hall. Opening this summer, the hall will feature a mix of opera, classical, contemporary, jazz, and electronic music.

As one would expect in a neighborhood with a lot of cutting-edge architecture, there are a number of design-centric boutiques. Many of them are in one small stretch of the KNSM-eiland, so it's possible to spend an hour or two window shopping. Pol's Potten sells bright and functional home and garden accessories; Dominio has a whimsical collection of Italian clothes, furniture, and housewares.

The five-month-old Lloyd Hotel allows travelers to make the Docklands more than a day trip. Built in 1921 to house Eastern Europeans as they awaited ships to emigrate to South America, the Lloyd was converted into a juvenile prison in 1964. Now the 116 uniquely designed rooms--some of which used to be former cells--showcase Dutch furniture and cost between $100 to $380 (though only 14 are at the lowest price). And the Lloyd's bright, modern Snel Restaurant has long hours, from 7 a.m. to 1 a.m.

The area's most famous new restaurant is Fifteen, an outpost of celebrity chef Jamie Oliver's London flagship. Open since December, the restaurant (which is located in a huge warehouse on the waterfront) isn't cheap, but the adjoining trattoria has a similar style and decently priced pasta and risotto à la carte. Given the Docklands' seafaring roots, a more fitting place to eat is in one of the several restaurants housed in boats. Once a Ukrainian vessel used for shipping, Odessa is now a French/international restaurant. Sip an Odessa Special cocktail ($8; vodka, crème fraîche, champagne) in the low-ceilinged below-deck lounge, or, if weather permits, dine outside. Also in a ship--a barge, to be precise--Einde van de Wereld (End of the World) serves humble food cooked by former squatters, on Wednesdays and Fridays from 6 p.m. For a picnic in one of the Docklands' many parks, stop by Roos en Noor, a deli in De Walvis, an office building that resembles a beached whale. Dishes like goat cheese quiche, Vietnamese salad with peanuts, and Thai curry are priced by weight.

A day of high-design hopping is best finished by revisiting the Docklands' wild roots. For that, head to Azart, an eccentric, Felliniesque cabaret boat--also known as the Ship of Fools. A man named August Dirks is the unlikely captain of a motley crew of performers. The boat, only open on Fridays from 11 p.m., has burlesque theater and cheap drinks. If only the boat would take you back to your hotel....

Getting to the Eastern Docklands

Amsterdam's main train depot, Centraal Station, is practically on the doorstep of the Eastern Docklands, so it's feasible to walk to where the neighborhood starts--though the wind can be relentless. Beginning in June, a tram (#26) will start running from Centraal Station to the area. Another option is to arrive by water; two ferries run a route every 20 minutes from Steiger 8 (Pier 8) behind the station and drop you off at Java-eiland. It's a 10-minute trip and costs $1.30. Alternately, bus 42 heads from the station to the Oostelijke Handelskade, then Java-eiland and KNSM-eiland; night bus 359 takes over running the route from midnight to dawn. You'll need to buy a strippenkaart, a card priced according to how far you travel. For more information, consult the transit authority (gvb.nl, 011-31/20-460-0606).